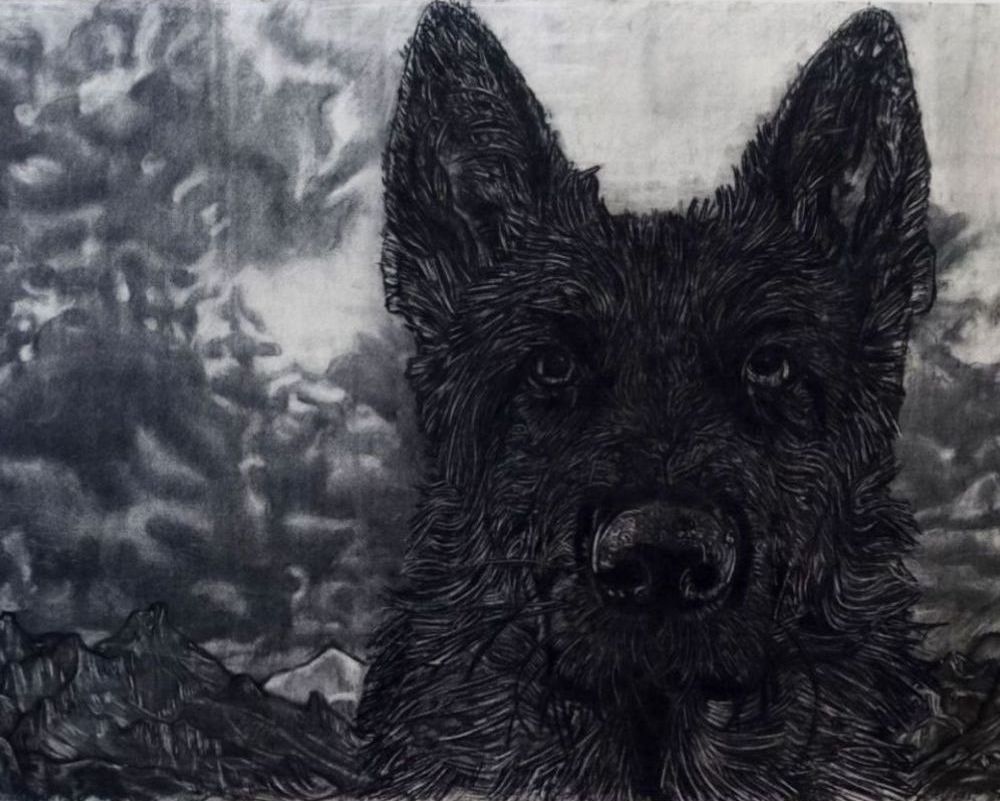 “What kind of Man am I, sitting at home, watching TV & reading magazines, going into a frustrated fury about everything and then going into my studio to adjust a red to a blue.” Philip Guston 1967

In Dreaming Different Dreams Gary Coyle follows on from his two previous exhibitions, The Wild Wood at The Dock in 2016 and Into The Woods at  the Ashford Gallery RHA in 2015. For both these shows Coyle mixed charcoal drawings with gallery sized colour drawings of Forests, namely The Dark Wood at Coole and The Una Bomber’s Forest and Hut In Dakota .
This time out it’s a large scale drawing of Mountains, a key symbol of Edmund Burke’s Sublime, in this instance. The Watzmann  Mountain in the Bavarian Alps, the subject of paintings by the great artist of the German Romantic Sublime, Caspar David Friedrich. Whereas Friedrich saw God’s ubiquity in Nature and so his Mountains were mystical, always obscured or veiled by mist or depicted in  twilit “Stimmung”, there is nothing concealed about these Mountains. Sharp, clearly defined and obdurate, made with photoshop, a drawing tablet and remixed by Designer Aiden Greneille, the wall drawings act as a foil for the charcoals as well as providing them with a setting and  a context.

As usual Coyle has gleaned stimulus and imagery from a wide array of sources, Popular Culture, Advertising, The Internet and Art History. Previously explored topics reappear, The Black Dog, is  a successor to Coyle’s drawings of the internet’s second most favourite subject, the Cat.This dog, less cuddly & cute, in equal parts ridiculous and menacing and just as unknowable, looms up out of a mountainous landscape pilfered from one of Bierstadt’s American sublime concoctions.In ‘Black Mirror ‘a disembodied arm (which tip’s it’s hat to Guston’s ‘The Line’) holds aloft a smartphone on a selfie stick against a brooding sky, if ever there was an object emblematic of our age, this is it. In ‘Portrait of a Boy’ Coyle revisits his 2015 ‘Portrait of a Clown’ which  like its predecessor has it’s origins in The Rococo and is a tender depiction of someone who will inherit this very uncertain world. All the drawings, both digital and charcoal have been made by his usual method of repeatedly drawing,  testing and  erasing, multiple times  until  eventually an image starts to emerge and take shape.

So far so grim, yet there are also amusements and  pleasures to be found, whether in the luridly coloured mountains  and  sky depicted in a garish pinky purple – who’s colour is derived from 18th Century Wallpaper in the Wallace Collection – the  drawing of the dogs nose or the fur on the boy’s snorkel jacket. Dotted around the gallery are drawings of the sky (mostly taken above Coyle’s hometown Dun Laoghaire) overlaid with text, these are not words of protest, or even lament but rather a playful riff on the profundities one encounters daily on the chalk boards outside coffee shops or personal mission statements on peoples home pages. Again they were made with Aiden Greinelle and feature a variety of  different typeface’s  and treatments. ‘No’- is apparently the artists favourite word, the saying and  thinking of which seems almost like a subversive act to a generation  of digital natives who think plinking away on a phone affects real change – Yes. ‘Guilty’ reflects a world in which  every choice, every option, every desire  is now accompanied by perpetual doubt and guilt. ‘FOMO’, a malaise  which now seems to run through all aspects of our  society and   culture.

In December 2013 Kim Jong Un, the Dictator Of North Korea had his Uncle & Regent Jang Song Thaek purged & executed. Besides the usual common or garden crimes cited for his downfall, whoring, gambling, misappropriating  funds and of course the old perennial, factionalism, it transpires, his really serious crime was that he was “Dreaming  Different Dreams “. At the time it really stuck out because it seemed, well, so mad. But more recently  it appears very prescient, a harbinger where our world is heading . Shoshana Zuboff  in her book Survilleance Capitalism  paints a terrifying picture  of Big Tech, which now knows  more about us than we know about our selves. “they have harvested our every click & like, to predict our every move  and ultimately to know our deepest dreams and desires before we do.” (1) That  Big Tech is perfecting  techniques and algorithms which they call “Choice Architecture” that would help to shape and direct our thoughts choices and behaviour”. Truly Dystopian.

The past  25 years has  seen  the world change, buckle and mutate under the onslaught of a data tsunami which seems to have left no one nor any part of our lives untouched, societally we are engaged  in  myopic navel gazing and the most incredible narcissism while the same time the natural world which for so long we believed we had overcome and conquered, is unravelling at terrifying speed, it seems almost  daily, new disasters are revealed, apocalyptic warnings given.

Which of these sublimes you wonder would Burke find more terrifying?