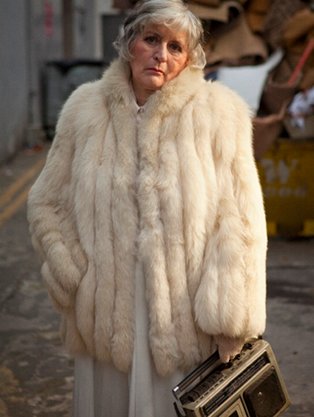 Interpreting the word ‘invisible’, a word commonly used by older people about their place in society, is the basis of this body of work, which was carried out during Garvan’s 15-month residency at Draíocht. Evolving from a participative approach, the work will include both personal and fictional representations on growing old. In one series, the younger body is replaced with the older body in recreated fashion shoots. Another series deals with the idea of self-image, something that was raised by the participants, as they discuss coming to terms with aging through the mirror. A short film, photographic portraits and personal texts from the participants themselves will also be exhibited, documenting the participant’s involvement and thoughts on aging and fashion. The exhibition is the result of many conversations around growing older, and in particular, growing older with fashion. You are asked to consider whether older people abandon fashion, or does the fashion industry simply abandon older people.

Garvan has most recently completed a feature length documentary titled ‘The Hidden Garden’ premiered at the Fringe festival, Dublin (2010), has exhibited his photographic work ‘Wearing Purple’ at The Clyne Gallery (2011), video work ‘Gubu’ at The Exchange Gallery, Dublin (2010), at ev+a / Reading the City, Limerick (2009), at Recontres D’Arles, France (2009) and at Newspace Centre for Photography in Portland Oregon (2008).