Galleries With[out] Walls – NFTs: The next frontier for artists? 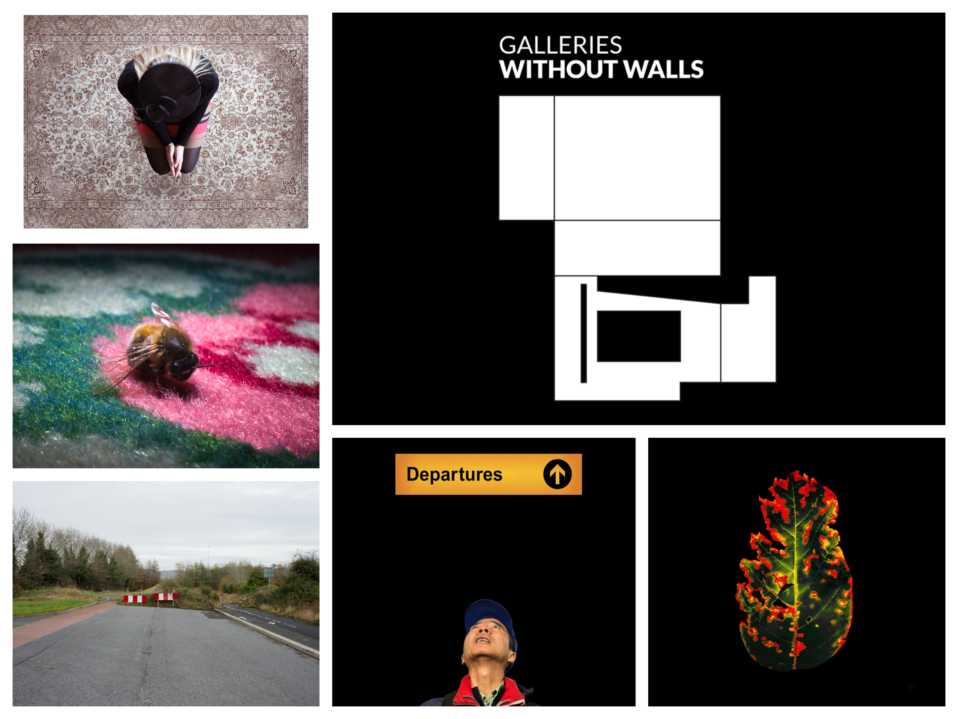 Galleries Without Walls is a collaborative programme by the Gallery of Photography Ireland, Regional Cultural Centre, Letterkenny and Nerve Centre, Derry~Londonderry. It aims to facilitate connections across multiple creative fields, allowing artists to experiment with innovative new formats for presenting work.

Volume 1 – NFTs: The next frontier for artists?

In March 2021, three letters were suddenly everywhere. NFT became the talking points of evening news segments, rabid Twitter threads, disparaging long-reads and of course, memes. Seemingly from nowhere, NFTs had captured the attention, imagination and discourse of the entire internet as millions scrambled to understand the impact the abbreviation would have on their industry. Is this a case of the emperor’s new clothes, or are NFTs the next frontier for artists? We’ve asked the artists to decide.

In this first Galleries Without Walls iteration, five lens-based artists and five audio composers explored the world of NFTs, reimagined current bodies of work for online dissemination, and collaboratively developed new digital artworks that will be exhibited both online and in-person at the Regional Cultural Centre.

Ordinances and Angels is about the observance of dress codes and the practice of head covering within traditional Christian faith denominations and groupings (predominantly in Northern Ireland). The photographer’s creative approach engages with the beliefs and plays with ‘visually concealing to reveal’ within an authentic engagement with female decorum and worship practice, informed by inner belief.

The body of work was made in 2014 and includes Untitled#02 (2014) which was awarded the RDS Taylor Art Award. Up to 5 individual images have been shown in group shows in Portugal, China, Ireland and Northern Ireland. ‘Ordinances I, II, III’ and ‘and Angels’ are a re-working and further development of the original body of work.

Ruth Gonsalves Moore was born 1969 in Enniskillen, where she returned to live in 2017. Ruth has worked as a community development and community arts management practitioner in Northern Ireland and the border counties, since first graduating with a Social work/Community Development degree and Masters (Equality Studies) in 1993 from University College Dublin. Returning to study in 2011, Ruth gained a first-class honours degree at University of Ulster in Photography (2014) and she regards her subject matter as that pertaining to cultural questions of identity, belonging, otherness and place.

Úna Keane is a composer & producer from Dublin. Since the release of piano solo LP ‘As I Wake, Still I Dream’ in 2017, she’s been steadily building a following on the ambient, neoclassical scene. A classically trained pianist with a background in tech, she blends piano, electronics, movement & film. Her use of cyclical patterns and looped motifs produces music that mines deep whilst conjuring cinematic landscape. Recurring themes in her work link nature, music & science. The sophomore instrumental album ‘In the Deep’ was released in 2019, with reviewers drawing comparisons to the work of Ólafur Arnalds and Max Richter. At the end of 2020 she put out critically-acclaimed Live Album ‘Collaborations’ on her UKM label.

‘Diesel’ investigates the socioeconomic, political and environmental impact of diesel laundering along the Irish border. The series traces the illegal dumping of toxic waste material by diesel launderers at sites along the border between Counties Louth, Armagh and Down.

The economic downturn, combined with the impact of the ‘Troubles’, has helped this illegal industry to thrive. The issue of diesel laundering is one that nobody wants to talk about – it is seen as a necessary evil. Diesel laundering provides cheap fuel and creates employment and opportunities in the area. Plant closures, illegal dump-sites and contaminated waterways are reported, but then soon forgotten.

Ciaran Dunbar was born in 1982 in Dundalk, Ireland, where he currently lives and works. He gained a BA in Photography from the University of Ulster, Belfast, in 2013. Having escaped The Troubles in the 1980s, Ciaran’s parents, originally from the north of Ireland, settled in Dundalk. It is here, against the backdrop of this border town, that issues of identity, displacement and marginalisation have become the focus of Ciaran’s work to date.

Steve McCollum is an award-winning animator and musician. He currently writes, records and tours with the celtic-punk band The Pox Men and has previously released music with Stoisis, The Narty Shams and Action Force Music of Mass Destruction. His film work has won awards at Edinburgh Film Festival and was nominated for an Irish Film and Television Award in 2003.

Departures is a series of photographs of people looking at the Departures information signs in airports. Studies of people at that moment, where they project themselves into a future somewhere else, preparing to leave the ground. Departures is also a gate, a portal to another realm. There is an anxiety, a focus on identity and security with all its paraphernalia. Passports, tickets, boarding cards. Survival rations of water and carry on items, baggage.

On one level, they are a record of a possible past age of mass travel, a social study of body language and ritual. On another level, the images are transitory on our screen. Photography freezes moments, separating the frozen gesture from its infinitely postponed future.

Michael Boran is a lens-based artist, working primarily with still photographic images while also making short films and slide shows. His work tracks the fleeting traces of interactions between time, place and activity. Tracing and mapping different movements and directions across the surface, they open up a bird’s eye view of underlying patterns and shifting coordinates. Often using aerial viewpoints from a height, at which the camera seems to be about to float away from the world, Boran’s photographs offer the viewer unfamiliar visions of the familiar. Notions of scale and transference between micro and macro-cosmos are explored in a manner of map-making.

Born in 1964, Michael Boran lives and works in Dublin. He graduated with a BA in Fine Art from NCAD in 1988 and regularly exhibits nationally and internationally.

Keith Mannion is a producer and musician that uses the moniker ‘Slow Place Like Home.’ Based in the forests of South-West Donegal, he has released a series of EPs and three critically acclaimed albums – debut ‘There go the Lights Again’ (2012), ‘Romola’ (2015) and ‘When I See You… Ice Cream!’ (2017). He is currently writing new material as ‘Slow Place Like Home’ and has just finished a forthcoming album as a member of the heralded Scottish-based band ‘Gaze is Ghost’.

His music has been play-listed on illustrious radio stations such as KEXP, KCRW, WFMU, BBC Radio 1 and BBC 6 music and his videos featured on MTV. Teaming with Google, he penned the soundtrack for their Marriage Equality campaign adverts in 2015.

On Pugin closely surveys the ephemera and dirt of the carpets of the Houses of Parliament, inviting a closer, more detailed scrutiny of a nuanced mess. The series is named after Augustus Pugin, the architect driven mad by his design of the Houses of Commons, whose patterns are still replicated in furnishings today. Linking Pugin with contemporary politics suggests Parliament’s emphatic commitment to preserving ‘fraying’ political heritage is impeding democratic progress in the institution.

Mark Duffy is an Irish artist based in the UK. Duffy’s artworks explore issues of politics, power and media in the public sphere. His recent ongoing work documents the aftermath of the UK’s fractious Brexit referendum, framing these themes with absurdity and humour. Duffy formerly worked as a photographer for the Houses of Parliament (2015-2019) during which his photojournalism characterised many memorable front pages.

Orri McBrearty is a creative multi-instrumentalist composer and producer living on the west coast of Donegal. He is equally at home soundtracking experimental films as he is facilitating the creation of other people’s records as a studio engineer and producer (quite often at the award-winning studio Attica Audio in Donegal). Recently, Orri has released a highly regarded audio collaboration with Little John Nee and was awarded an Arts Council bursary to begin work on his debut neo-classical ambient album.

Nowadays, it is often said that we must be aware that the environment is in real danger, as human beings, we are slowly destroying it. Most of the time, this issue appears in an intellectual form. Yet, there is an emotional aspect, which is not really taken into account: what if we let the emotions speak for themselves, would the action of others against nature be more committed?

The photographer Nina Maalej goes to the heart of the Amazonian rainforest, Brazil, in order to create a series of pictures related to the forest fires caused in ample amounts for many years now. The project « amazônia », shows us an evolution, from the seventies (the beginning of the deforestation) until 2050, trying to imagine what the Amazonian forest might look like if humans keep destroying it.

Nina Maalej is a photographer and a designer born in France. After completing her MA in graphic design in Lyon, Maalej travelled to India, where she was inspired by the aesthetic changes in local vegetation. Since that moment, her work has focused on this subject: plants. Through photography, she emphasises the graphical qualities of plants to show their beauty to the viewer.

In addition to photography, she is a graphic designer in a French video game studio. There, she works around the universe of gemstones. She photographs real gems, then works on their colour calibration, which sharpens her eye. Therefore, it allows her to work on the macro and colourimetric universe in her photographic practice too.

Jeremy Fitz Howard studied electroacoustic composition at Keele University and completed a MA in Soundtrack Production in Bournemouth University. He has composed scored for feature films, short films and animations in Europe, Africa and Asia, and regularly performs with groups such as Little John Nee & the Caledonia Highly Strung Orchestra , The Tea Dance Triode and Aul Boy.