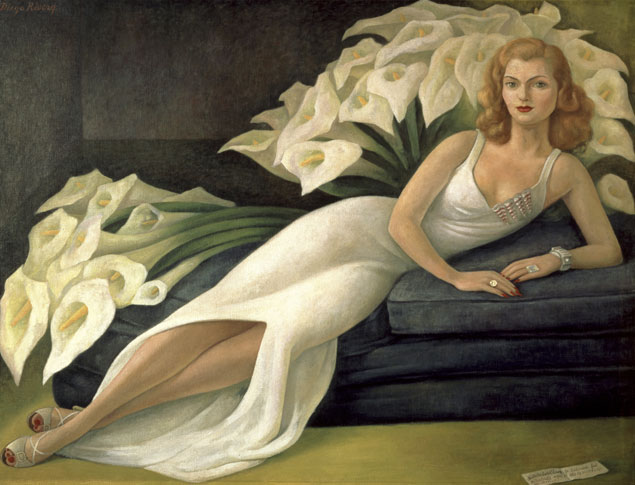 The eagerly-awaited exhibition of the work of the celebrated Mexican artists Frida Kahlo and Diego Rivera opens to the public at the Irish Museum of Modern Art (IMMA) on Wednesday 6 April 2011. Frida Kahlo and Diego Rivera: Masterpieces of the Jacques and Natasha Gelman Collection features many of the artists’ most iconic paintings and offers a rich insight into the work and lives of the two central figures of Mexican Modernism. Lithographs, drawings, collages and a page from Kahlo’s diary are also included, alongside photographs of the artists by some of the most renowned photographers of the day. Prints by Kahlo’s father, Guillermo Kahlo, and a film by the Japanese artist Yasumasa Morimura are also being shown. The exhibition will be officially opened by the Minister for Arts, Heritage and Gaeltacht Affairs, Jimmy Deenihan, TD, at 6.30pm on Tuesday 5 April.

Few artists have captured the public’s imagination with the force of the painter Frida Kahlo (1907-1945) and her husband, the painter and muralist Diego Rivera (1886-1957). The myths that surrounded them in their lifetime arose not only from their renowned bodies of work, but also from their vigorous participation in the life of their time, their friendships and conflicts with leading figures, their indomitable natures and their striking physical presence. In her lifetime Kahlo was best known as Rivera’s colourful wife, with her art being classed as secondary to his, a position that was to alter in later years.

The exhibition presents six of Kahlo’s famous self-portraits, her favourite mode of expression, comprising more than a third of her oeuvre. Many reflect the artist’s personal difficulties, including a horrific tram accident, her subsequent ill health and miscarriages, her loneliness and the sometimes troubled nature of her relationship with Rivera. He himself described Kahlo’s work as “ the only example in the history of art of an artist who tore open her chest and heart to reveal the biological truth of her feelings.”

In Self-Portrait as Tehuana or Diego on My Mind, 1943, Kahlo dons a lace head-dress, as worn by Tehuana women on ceremonial occasions. Encircling her head like an aureole, it lends her the attributes of a spiritual icon. In addition to Kahlo’s spellbinding gaze, we are also drawn to the miniature portrait of Diego that appears in the centre of Kahlo’s forehead. In another of her best known works, Self-Portrait with Monkeys, 1943, she is attended by a court of spider monkeys against the backdrop of a tropical forest, while her penetrating stare demonstrates her use of both Old Master and Primitivist techniques. Another important influence, that of indigenous Mexican people and their art, can be seen in Self-Portrait with Necklace, 1933, and Self-Portrait MCMXLI, 1941.

Diego Rivera’s training followed traditional European models, reinforced by a move to Europe in 1907, where he became part of the Cubist and other Modernist movements. However, he had already broken with Cubism prior to his return to Mexico in 1921, where a programme to encourage mural painting on public buildings to support the ideal of equality for the native population had been introduced by the Ministry of Education. Rivera emerged as a prominent member of this Mexican mural movement, an influential fusion of artistic, literary and intellectual forces in the post-revolutionary period. He was well established as a muralist when Jacques Gelman commissioned him to paint a portrait of his wife in 1943. In Portrait of Mrs. Natasha Gelman the subject is shown in a sensual pose wearing a sculpted dress against a background of calla lilies, a recurrent motif in Rivera’s works, signifying both the exquisiteness of the sitter’s nature and female sexuality.

Well before the 1940s, Rivera had already embarked on a new genre of painting and drawings, focusing on indigenous motifs from his murals and on portraits of mostly Mexican-Indian mothers and children. The exhibition includes several examples of this style, such as Modesta, 1937, and Girl with Gloves, 1943, both typical of their portrayal of appealing Mexican children. One of his most celebrated works, Calla Lily Vendor, of two girls in Mexican dress in front of a huge basket of lilies, was painted in 1943, a year in which he made expeditions with his students into the city and provinces to paint such everyday scenes. Sunflowers and The Healer, also 1943, are painted in this colourful style that made his work so popular in the Mexican and US art markets.

The 18 paintings in the exhibition are supplemented by other works including a page from Kahlo’s diary, lithographs, drawings and collages. Also included are striking photographs of Kahlo and Rivera by Lucienne Bloch, Héctor García, Martin Munkacsi, Nickolas Muray and Bernard Silberstein. As prominent personalities in Mexico’s cultural world, Kahlo and Rivera were used to the presence of press photographers in their home, acting as witnesses to their lives, and the photographs included in the exhibition contributed to the aura surrounding the couple.

The exhibition is further extended by the inclusion of photographs by Frida Kahlo’s German-born father Guillermo Kahlo. Having served as an apprentice in his father-in-law’s photography studio, Kahlo was commissioned in 1904 to make a visual inventory of important national buildings. The resulting prints, including churches around Mexico City and Tepotzlan and views from the Palace in Chapultepec Park , illustrate the architectural photography at which he excelled and his mastery of composition, light and shadow. Also being shown is Japanese artist Yasumasa Morimura’s conceptual film Dialogue with Myself (Encounter), 2001, which pays homage to Frida Kahlo and is part of a series of works entitled An Inner Dialogue with Frida Kahlo, in which Morimura talks the role of Kahlo the better to reveal her world.

The Gelman Collection is a significant collection of more than 300 works of modern and contemporary Mexican art, established by Jacques and Natasha Gelman in the 1940s and housed in its own museum in Cuernavaca, Mexico. Russian-born Jacques Gelman (1909-86) travelled to Mexico in 1938 to found his own film production company. While there, he met Natasha Zahalka Krawak (1911-1998), who had fled her native Czechoslovakia following the Nazi invasion. They married in 1941 and became major art patrons in Mexico City at a time when it was exceptional to do so. The collection comprises two distinct elements. In addition to key paintings by Kahlo and Rivera, the Mexican collection includes works by David Alfaro Siqueiros, José Clemente Orozco, Leonora Carrington, Rufino Tamayo and Francisco Toledo. Following Jacques’ death, Natasha Gelman continued to add to the collection with the guidance of her friend Robert Littman. When she died, the collection was entrusted to the Vergel Foundation and in the following years 12 new works by Kahlo, comprising all the works on paper in the exhibition, were added.

The Gelmans also a had a collection of modern European paintings by artists such as Salvador Dalí, Henri Matisse, Joan Miró and Pablo Picasso, which they bequeathed to the Metropolitan Museum of Art in New York.

Frida Kahlo and Diego Rivera: Masterpieces of the Jacques and Natasha Gelman Collection has already been shown to great popular and critical acclaim at the Pera Museum, Istanbul. It will also travel to the Pallant House Gallery, Chichester, England, where it can be seen from 9 July to 11 October 2011.

An exhibition guide accompanies the show.

The exhibition is curated by Seán Kissane, Head of Exhibitions at IMMA. It continues until 26 June 2011.

The exhibition is sponsored by BNY Mellon and supported by The Irish Times, the Department of Arts, Heritage and Gaeltacht Affairs, the Mexican Embassy in Dublin and the Instituto Nacional de Bellas Artes.

Sun and moon, dove and elephant. Their Love story, as painted by Diego Rivera and Frida Kahlo