Fiona Larkin: Another View of Helene 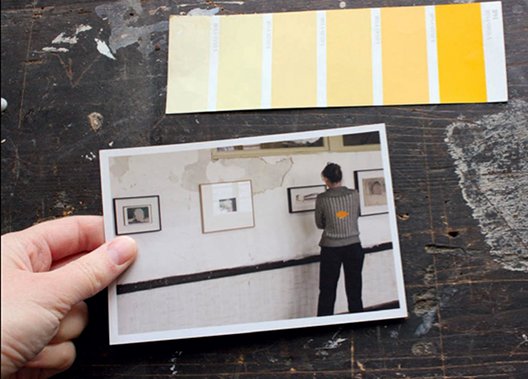 The Butler Gallery is delighted to present Another View of Helene, a multi-media exhibition by the Belfast-based artist, Fiona Larkin.

Fiona Larkin’s work arises from an interest in the lives of others. In discovering ways of understanding and engaging with others, the work finds form in a variety of media from action to video to drawing. The camera is used to engage reflexively and directly with viewers. The work surrenders to the determination of significant chance elements, for example: a stranger marked with an unusual emblem, a collection of ‘yellow’ images gathered through casual sightings, or to the kindness of strangers. Larkin’s interventions become connective tissue between action, material production and the viewer’s access to the story.

Developing fictions, invoking the imagination and inventing histories seem a fitting way to engage with the idea of the stranger or the unknown. The work settles on the surprising or unsettling fact that we can never truly ‘know’ another. This body of work finds narrative in chance sightings of people in cities around the world who appear as a modern Rückenfigur. The Rückenfigur is a feature of German romantic painting where the figure is seen silhouetted against the sky. In Larkin’s work, the figures are often shot in the ordinary urban environment, silhouetted against less significant backdrops.

Another View of Helene, begins with a surreptitious photograph taken of a girl at a gallery in Berlin. The girl appears to have a strange yellow mark on her back. This simple curiosity allows a keyhole opening into what Slavoj Zizek calls ‘the abyss of the other’, in recognizing what we do not know about the other we fill the void with fantasy. Materialising imagined connections is where the work finds its starting point. The colour yellow is used as a guide or driving force in developing a language for the unknown, attempting to develop a glossary through collected images of ordinary things.

Larkin’s collected material is made up of t-shirts, snapshots, and on occasion, the artist herself enters the frame to gain access to or develop connection with the stranger in the photo. Cutting up, reassembling, repeating, reenacting and sourcing second hand material play an important role in the development of the work. The video work entitled De Ne Pouvoir Être Seul, (not to be able to be alone) shows the artist trying to find a link or an answer to the strange yellow mark, through matching and comparing photographs. However, though many are tested, none seem to fit. Each iteration or combination of material and gesture proposes that it holds an answer or the ‘right configuration’. However, these patterns or associations don’t offer explanations for the girl or her yellow mark, they simply expand our understanding of what we don’t or can’t know. In Another View of Helene, Fiona Larkin offers a prismatic view of the world, where suggested guides and coordinates don’t always take us where we plan to go.

Fiona Larkin is an artist based in Flax Studios, Belfast. She holds a BA from N.C.A.D. and received an MFA from the University of Ulster in 2002. She has participated in International residencies in Tokyo and New York and has been the recipient of several Arts Council NI awards. She has exhibited both nationally and internationally with work shown in Belfast, Derry, Dublin, Spain and Japan. From 2007-2010 she taught Fine Art in University of Ulster, Belfast. She is currently teaching on the Fine Art Media course at N.C.A.D. Her work is held in the A.C.N.I.’s and University of Ulster’s public collection.

With grateful thanks to The Arts Council for essential annual funding and to the OPW, FÁS, The Heritage Council and Kilkenny Local Authorities for additional assistance.

Tour, Talk and Tea: Thursday May 17 (11am), part of Bealtaine at Butler Gallery, celebrating creativity as we age. For more information about this and other Bealtaine events, contact Bairbre-Ann at 056-776-1106.