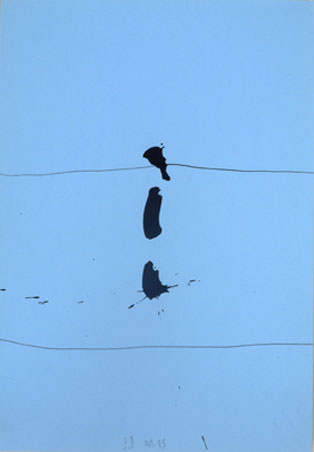 “The paper becomes what we see through the lines and yet remains itself. Let me give an example. A drawing made in 1553 by Peter Brueghel…In the catalogue it is identified as ‘Mountain Landscape with a River Village and Castle’. It was drawn with brown inks and wash. The gradations of the pale wash are very slight. The paper lends itself between the lines to becoming tree, stone, grass, water, masonry, limestone, mountain cloud. Yet it can never for an instance be confused with the substance of any of these things, for evidently and emphatically it remains a sheet of paper with fine lines drawn upon it.” (John Berger, Berger on Drawing, published by Occasional Press in 2005).

LCGA is pleased to present Fine Lines, a selection from the National Collection of Contemporary Drawing, which has been housed in Limerick since 1991. The Limerick Contemporary Art Society founded the drawing collection in 1987, the first of its kind in Ireland and later donated the works to LCGA. By 1991, the gifted collection comprised of 23 works by 23 artists. In 1992 the Arts Council donated 10 further works and by 1996 when the gallery launched the catalogue, The National Collection of Contemporary Drawing Volume 1, the collection amounted to 72 works by 46 artists. Since then the collection has grown steadily and it is worth noting the many Limerick artists featured as part of the collection: Sam Walsh, Walter Verling, David Lilburn, Jim Sheehy, Tom Fitzgerald and Donald Teskey et al.

The collection now comprises over two hundred and thirty works by more than one hundred and eighty artists. Eight new works by eight Irish artists, Stephen Brandes, Julie Merriman, Laura McMorrow, Niamh O’Malley, Niamh McCann, Brendan Earley, Clodagh Emoe and Brian Fay, were purchased for the collection in the last year and are presented here in the selection for Fine Lines. These are drawings in a range of media such as carbon on canvas, felt tip pen and silver paper, formica veneer on paper, as well as the more traditional (or expected) pencil on paper. Collectively they demonstrate that there is as much breadth and variety in the choice of material as in diversity of forms, styles and content that characterise the new acquisitons. They are worthy additions to a collection which, with the gallery’s imminent move back to the expanded and refurbished Carnegie Building in Pery Square, will deliver on the intention of the original donors that the National Collection of Contemporary Drawing would grow to be a unique and valuable resource for the city, the region and for all who love drawing.

Limerick City Gallery of Art is part of Limerick City Council, funded by the Arts Council and supported by Fás, Fáilte Ireland, Shannon Development and the Heritage Council.