Film and Design in Close Up – a one-day symposium 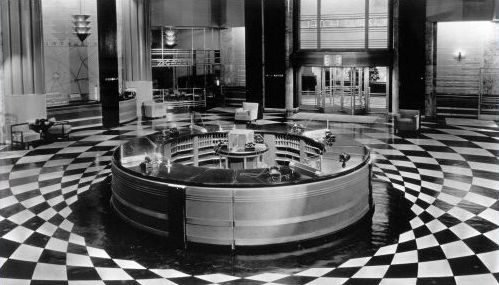 Reflecting on his work for the film Grand Hotel (1932) MGM’s design studio head Cedric Gibbons said ‘motion picture settings usually serve the purpose of providing a background for the action of the picture. Here, however, the sets take the role of an actor, becoming one of the central figures in the story’.

This one-day symposium at NCAD on Friday 2nd March – organised by the MA Design History and Material Culture in conjunction with the Audi Dublin International Film Festival – will explore Gibbons’ claim. Critics, cinema historians and film industry professionals will reflect on the central role played by design in cinema, putting costumes, props and sets in ‘extreme close up’. How do things and spaces act on screen? How do they shape film narratives? And what are their off-screen effects on audiences and culture?

Ticket price includes a lunch from the much celebrated Luncheonette.

This one-day symposium at NCAD in conjunction with the celebration of the life and work of Cedric Gibbons which forms part of the 2018 Audi Dublin International Film Festival.

Gibbons was the most successful art director in the history of cinema. His team at MGM shaped the sets, props and costumes for more than a thousand films,  contributing greatly to the studio’s reputation as Hollywood’s number one ‘dream factory.’ He conceived the colossal sets of ‘Ben Hur’ (1925); the technicolour realm of ‘The Wizard of Oz’ (1939); and Van Gogh’s world in ‘Lust for Life’ (1956). And Gibbons’ enthusiasm for abstract art and art deco interiors probably did more to promote the Modern Movement than the Bauhaus. He won eleven Oscars for his art direction, receiving the famous statuette that he himself had designed.

To hear more about Gibbons’ life and work, please listen to this recent interview with Grace Lennon, one of the speakers at the symposium, on RTE’s Arena programme here.