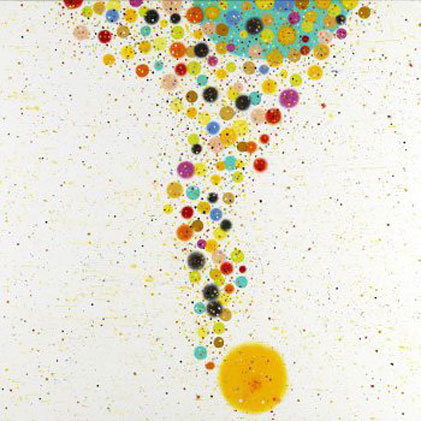 An exhibition by Ferran Garcia Sevilla, a leading Spanish artist whose career has embraced many of the most influential art movements of the past 40 years, opens to the public at the Irish Museum of Modern Art on Thursday 10 June 2010. Ferran Garcia Sevilla presents 42 paintings in the artist’s characteristically eclectic style, which draws on influences as diverse as his travels in the Middle East, philosophy, Eastern cultures, comic books and urban graffiti. The exhibition comprises works from 1981 to date and includes well-known earlier works, alongside a group of more recent, previously unseen pieces, all illustrating the extraordinary visual richness of Garcia Sevilla’s work.

The earlier works in the exhibition date from the 1980s, when Garcia Sevilla was one of the principal proponents of the so-called return to painting. This followed a period as an outstanding figure in the vibrant Catalan Conceptual Art scene centred on Barcelona, where he had settled from Palma de Majorca in 1969. Paintings such as Ruc series, created after a trip to Nepal in 1986, brought Garcia Sevilla great international acclaim, as part of an explosion of Spanish art on the international scene, which also included artists such as Juan M?noz, Cristina Iglesias, José Maria Sicilia and Miquel Barceló. During the 1980s he showed regularly throughout Europe and beyond, with solo show in Spain, France, the UK and Japan. He participated in the Venice Biennale in 1986, in Documenta 8 in Kassel in 1987 and in ROSC 1988, which took place in number of locations around Dublin, including the Royal Hospital Kilmainham now the Irish Museum of Modern Art.

Works from this period such as the celebrated Deus series from 1981 demonstrate the artist’s interest in exotic cultures and mythologies, while their execution, with rapid brush strokes and splashes and drips, suggest the immediacy of primitive rituals. The Ruc paintings show a further development of these mythic or symbolic forms in a more graphic style and include what the artist himself has described as some of his most powerful images. Always controversial, he also began to introduce, sometimes self-mocking, phrases into his paintings, such as “If you discover the secret I’m sure you’ll get depressed” in Muca 17.

Towards the end of the 1980s Garcia Sevilla works take on a more three-dimensional form incorporating everyday objects, including books, shoes and light bulbs. His use of floor tiles in the Mosaico series refers directly to the work of the famous Catalan architect Antoni Gaudí, who used broken ceramics in, for example, his design for Parc Güell. The early 1990s sees the introduction of still further new imagery in the form of coloured discs, hands, feet and arrow motifs in the Sama series from 1990, while the many works that make up the Xa series from 1995 contain primarily black and red forms reminiscent of scaffolding or of the iron grilles used in 19th-century balconies in Barcelona.

Towards the end of the 1990s, in series such as Tepe, Garcia Sevilla’s work becomes more introverted, featuring drips, intertwining and superimposed lines, dots and nets. While these motifs suggest balloons, gun shots, fireworks and comets as well as force-fields, graphs and atmospheric phenomena, they may also simply be results of the properties of paint as a material. In some cases, he exaggerates the dripping effect further by rotating his canvases. These works were the last to be seen for some time and marked a move from the narrative to the lyrical in which specific references are abandoned.

In 1998 Garcia Sevilla stopped exhibiting in solo exhibitions, alienated by what he saw as an overly-commercialised art scene. He continued, however to create work with the same vigour as before and works began to emerge again in a solo show in Barcelona in 2007. In the Moll series from 2008, for example, the dot has become the predominant element, seemingly referring to notions such as the dissolution of reality or the disintegration of matter. Sometimes they are spread over the expanse of the painting; on other occasions, they form constellations and molecular chains.

The exhibition is curated by Enrique Juncosa, Director, IMMA.

The exhibition is co-produced by the Irish Museum of Modern Art in collaboration with Patio Herreriano, Museo de Arte Contemporáneo Espanol, Valladolid, Spain, where it will be shown from 2 October 2010 to 9 January 2011.

The exhibition is supported by Institut Ramon which promotes Catalan language and culture internationally.

Visitors are asked to note that, on the advice of the OPW, the Museum is unable to facilitate access by lift-dependent visitors, including wheelchair users, to the First Floor Galleries in the main building until further notice. The Museum greatly regrets this inconvenience. The Ground Floor Galleries, the New Galleries and IMMA’s café and bookshop remain accessible to all visitors.