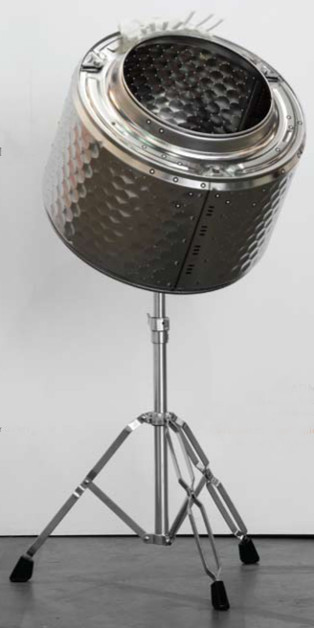 In partnership with the Autocenter Gallery in Berlin, the Crawford Art Gallery is pleased to present, from 12 April to 1 June 2013, False Optimism, an exhibition of contemporary art from Berlin. Not based on any single theme, False Optimism is a group exhibition that includes a diversity of styles and media, as represented in the work of fifteen artists. The artists include some at the beginning of their careers, while others have considerable experience of surviving in a tough art world. Although in False Optimism there is a focus on the art being made in one city, at the same time there is no characteristic in the work that identifies it as being ‘Berlin art’. The artists tend to respond to the same issues being addressed by other major cities; issues such as identity, globalization, personal and historic narratives, and the deconstruction of the art object. Berlin today attracts artists from all over the world. It has a vitality that is undeniable, and with rents comparatively low and studio space plentiful, has become a mecca for young artists from around the world, who add their own individual creative imagination to the city’s art scene.

Among the works in False Optimism are Absolute Vitality Inc. (2012) a metal construction set up for the company founded by the American artist duo AIDS-3D (aka Daniel Keller and Nik Kosmas). Members of the public are invited to buy shares in this company and the work is a commentary on the nature of international capital and wealth creation. The painter TATJANA DOLL presents three large canvases depicting the popular Belgium comic series Lucky Luke as bright distorted silhouettes, while the paintings of EBERHARD HAVEKOST range from dark forest scenes to large grey, washed-out images of everyday scenes and images taken from newspaper reports. One of the four Irish artists in False Optimism, DECLAN CLARKE will show for the first time in Ireland his major new work, a video film entitled We Are Not Like Them (2013). Following the travels of an unnamed and anonymous individual, perhaps a secret agent, to four post-industrial cities in Europe, We Are Not Like Them references cinema of the 1950’s, the spy novels of John le Carré and today’s Europe, where manufacturing industries have closed, causing unemployment and urban decay.

DENNIS MCNULTY will create a site-specific sound installation set in an upper corridor of the Crawford Art Gallery, representing time and the passing of seasons. McNulty is also represented in the exhibition with The time inside the spoil (2012) inspired by modernism and design. IL-JIN ATEM CHOI and BECKER SCHMITZ will create an installation within a room using only post-it notes, while large black ink line drawings by Il-Jin connect his art with that of Henri Michaux and the Tachiste movement. A descendant of the eighteenth century French painter Girodet, JULIETTE BONNEVIOT’s most recent work, Rush Hour Gate (2012) translates the subtitles from a Jackie Chan movie into hand-painted Chinese ideograms. An artist from the Netherlands, PEGGY FRANCK uses a variety of materials to create her three-dimensional installations that provide a commentary on materials and the language of sculpture. The exhibition will showcase several works by Franck, including Drawing From a Store of Thought (2012), a large coloured translucent installation, shown in the eighteenth-century room at the Crawford and A household without responsibilities (2013), Franck’s most recent sculpture, consisting of objects and artifacts in a bathtub.

Norwegian artist, YNGVE HOLEN regularly employs recycled consumer goods and industrial materials in his sculptures. Works such as Sensitive to Detergent, Fast as Schnell (2012) and Sensitive to Detergent, Drive the Change (2012) have used discarded washing machine parts to create these assemblage works that comment on how people respond to, and are affected by, advances in technology. The sculptor KITTY KRAUS works with a materials such as glass, ice, light bulbs and mirrors; materials that are highly fragile and have the potential towards failure. Because of their fragile nature, Kraus’ sculptures usually need to be constructed on-site, and so her works in the exhibition, Untitled (Spieggellampe) (2006-ongoing), small mirrored cubes emitting light that creates an array of patterns in a darkened space, will be made by the artist specially for False Optimism. Co-curator for False Optimism and co-founder of Autocenter, JOEP VAN LIEFLAND’s work deconstructs notions of high or popular culture, by using mixed visual metaphors. van Liefland will show 5-2012 (2012), a bronze sculpture representing VHS tapes, that relates to the ongoing theme in his work of redundant technologies. Belgium born artist, PHILIP METTEN makes large metallic robotic-like sculptures, including Drone (2012). Exhibited in a glass museum case, Drone is a playful take on contemporary culture. Irish artist ÚNA QUIGLEY’s video, The Gifted Water (2012), is a psychological portrait of a person’s individual struggle to find expression. The film features Berlin-based performance artist Sheena McGrandles. In works such as Lynx Effect (2012), constructed from a metal sword and empty bottles of shower gel, TIMUR SIQIN highlights the fantasy worlds created in advertising. Si-Qin’s work responds to consumeristimagery and the public response to advertising. False Optimism will include photographic works by CIARÁN WALSH, images taken in the darkened interiors of the Ethnological Museum in Berlin with a high-speed camera.

Autocenter, Berlin was founded by Maik Schierloh and Joep van Liefland in 2001, and showcases the work of young artists in Berlin.

Supported by DAHG and the Goethe-Institut, Irland, False Optimism coincides with the

programme of events in Ireland for the EU presidency in 2013.

Cork and co-curated with Joep van Liefland and Maik Shierloh at the Autocenter, Berlin.