Eoin Mc Hugh: the skies will be friendlier then 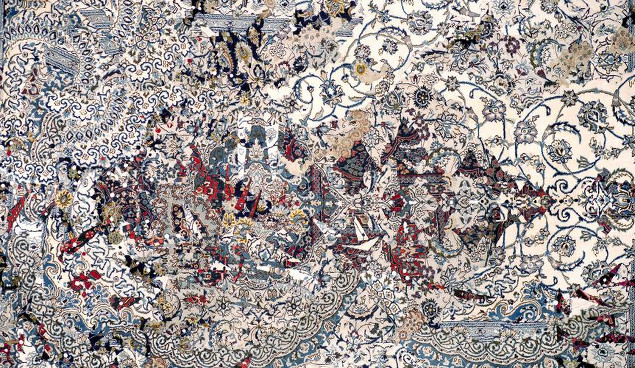 Mc Hugh’s hyper-real/hyper-surreal language is driven by his interest in the psychology of imagery; a two and three dimensional investigation of the space between the image, the object and the idea. ‘the skies will be friendlier then’ marks a major development within Mc Hugh’s practice, introducing ambitiously complex sculptural and textile works. Several Persian and Turkish carpets are reconstructed as large-scale collages where forms are suggested from neutral abstract patterns in conflict. An enormous, flayed and headless beast, like something never witnessed before, is in turn confronted by an equally otherworldly, crouching infant. These works, accompanied by an intimate oil painting of a woman lying in foetal position, apparently cite the early history and aesthetics of psychoanalysis and the poems of Wallace Stevens and Seamus Heaney. These references, however, are by no means immediately obvious, and through suspension of disbelief, Mc Hugh strives to constantly keep the viewer questioning how they process images, preventing one definitive interpretation being extracted from the work.