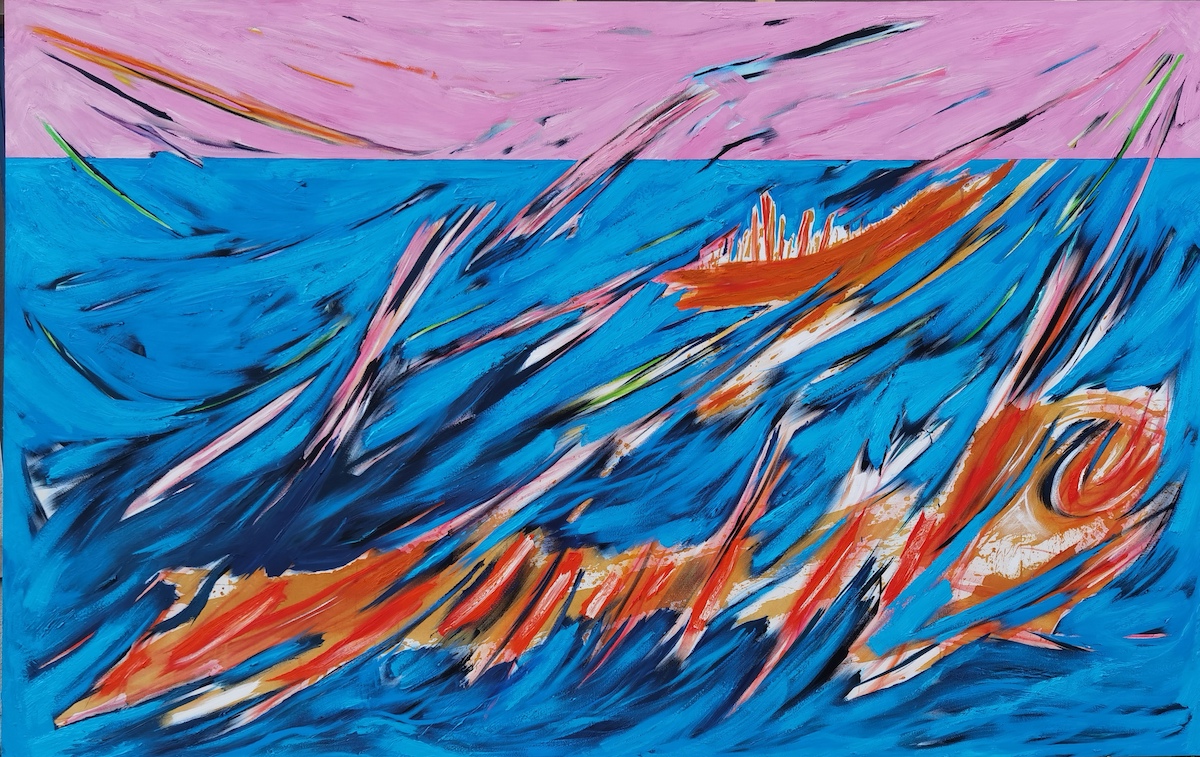 Goma, Gallery of Modern Art, Waterford in conjunction with Artform School of Art, and The Theatre Royal, Waterford are delighted to invite you to retrospective of Ben Hennessy’s work spanning over four decades. On November 25th the Exhibition Art Trail with artist in attendance will begin at Artform’s 44 The Quay venue (preview) at 6pm, visit The Theatre Royal at 7pm, and culminate with a launch at GOMA Gallery at 7.30pm with a music and drinks reception.

ELPIS –The Exhibition will celebrate Hennessy’s achievements in painting and give an overview of the artist’s work to date. It will trace his development from his prodigious appearance on the public stage with his first solo exhibition while still a student in 1981, through his works in the 90’s and 2000’s right up to his most recent work.

The Exhibition will show Hennessy as an intelligent interrogator of art. Over 4 decades he has challenged the aesthetic of his own practice, celebrating the primeval instinct of human mark-making and the resilience of creativity in the face of adversity. The exhibition, presented in three venues, will showcase works such as “Red Runner” and “Harpo’s Gookie” from 1983 which were influenced by the Neo Expressionist Francesco Clemente which he regarded as ‘punk’ painting. So too, will feature many works from solo exhibitions such as ‘the sun kissed his wings’ after the birth of his first son in 1997, Chimera (2003), “Journey of Lir” (2007), Alizarin (2015) “Boat” (2017) right up to new works completed over the last three years.

Hennessy’s unique, highly painterly, expressionist style will be evident throughout the Exhibition – with big gestural marks, bold shapes, and the energy of early de Kooning and Karl Appell. A new development of splitting the canvas into heavily painted surfaces, reminiscent of Sean Scully’s large works, fuse to create bold, dynamic surfaces, while his recent series employ a ‘painting in a painting’ to bring focus on the creation of art as a subject matter in itself. Hennessy concerns himself with the intuitive instinct to be creative and the creativity of children continues to be a source of inspiration for his “Big Colourdee Creative” works that are both playful and joyous.

Using mythologies and story, Hennessy weaves narratives through paint in visually exciting, visceral compositions using deep crimsons and vibrant pinks, purple-blacks and burnt orange, colours that celebrate their own presence – vibrating and making the paintings hum with their own powerful, unique force.

These mythologies and stories are used, in so many of his paintings, to juxtapose the innocent, creative child and the often cruel, human injustice of the world around us – from early works presented in San Francisco in the 80’s such as ‘April’ and “Bag Lady with Cats” to the Greek mythological story of Icarus and the liminal theme of a boat in his 2017 Exhibition ‘BOAT’. Now in 2021, this exhibition” Elpis” (a reference to the Greek mythological spirit of hope), sees many themes reworked to reveal an uncompromising creative narrative that transcends myth and confronts the tragic realities of refugees displaced and destitute, who strive to achieve a better life.

‘ELPIS’ the Exhibition will introduce us to over 25 brand new works inspired by Hennessy’s experiences working with Syrian Refugees at TIAFI, in Izmir, Turkey, where, among other things, he established a studio and Art Room for children.

ELPIS The Exhibition trail runs: November 25th until January 2nd at GOMA Gallery and The Theatre Royal. December 2nd to 23rd at 44 the Quay, Waterford, in conjunction with Artform Annual Art Fair.