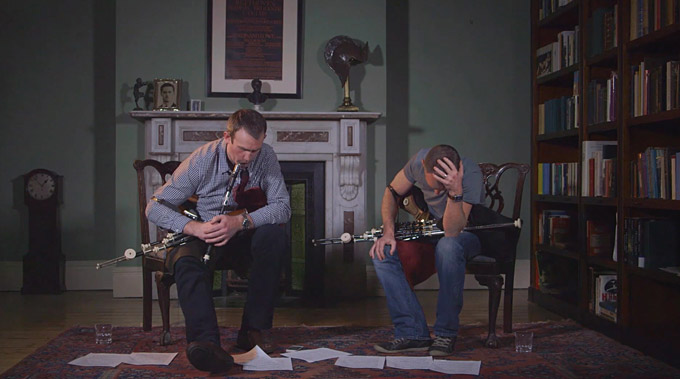 The film centres on two Irish uillean pipers, Leonard Barry and Padraig Carberry McGovern, who are asked to perform Rakoczy’s March without any previous knowledge of the score. The music, which was once the unofficial national anthem of Hungary, is played by Irish pipers as Lipóti Virag  (Leopold Bloom) departs for Százharminczbrojúglyás-Dugulás in James Joyce’s Ulysses (episode 12, Cyclops*).

From the musicians initial startled reaction of hearing and reading the music, to their frustrated, repetitive and exhaustive attempts in realizing the score’s complex musical phrases, Byrne films the musicians in their attempt to discover if Joyce’s fictive reference to Irish pipes playing Rakoczy’s March is a viable literary construct.

In using Joyce’s text excerpt, Byrne creates a device to explore issues of censorship, nationhood and the rise in anti-Semitism or the ‘Other’. Mirroring the complexity of the musical score and the text, the film presents to the viewer questions that are prevalent in today’s global and conflictual societies. The dedication of the musicians to push their own musical knowledge and skill touch upon the enduring qualities of human’s need to overcome and survive yet they also explore the dichotomy of experience and factual knowledge, accelerated by the omnipotence of the digital world, and if fictional narratives have become the basis of fact in real life.

*  “A large and appreciative gathering of friends and acquaintances from the metropolis and greater Dublin assembled in their thousands to bid farewell to Nagyaságos uram Lipóti Virag, late of Messrs Alexander Thom’s, printers to His Majesty, on the occasion of his departure for the distant clime of Százharminczbrojúglyás-Dugulás ( Meadow of Murmuring Waters). The ceremony which went off with great éclat was characterized by the most affecting cordiality. And illuminated scroll of ancient Irish vellum, the work of Irish artists, was presented to the distinguished phenomenologist on behalf of a large selection of the community and was accompanied by the gift of a silver casket, tastefully executed in the style of ancient Celtic ornament, a work which reflects every credit on the makers, Messrs Jacob agus Jacob. The departing guest was the recipient of a hearty ovation, many of those who were present being visibly moved when the select orchestra of Irish pipes struck up the wellknown strains of Come back to Erin, followed immediately by Rakoczy’s March.”