El Lissitzky: The Artist and the State 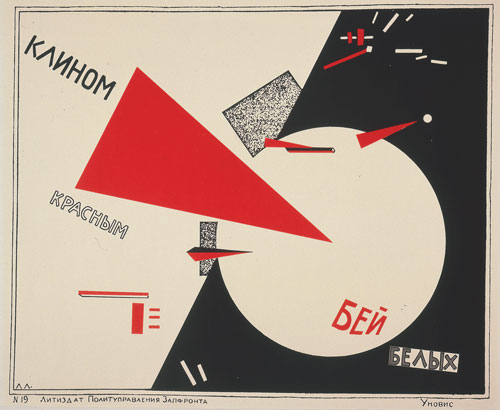 IMMA presents El Lissitzky: The Artist and the State,as we approach the centenary of Ireland’s Easter Rising and reflect on the vibrant artistic and cultural community who gave voice to a new image for the emerging state and a visual language for its politics. This exhibition places this local reflection within a broader global consideration of the role of artists in the imagination of emergent states of the early 20th century and a contemporary reflection on the task of the artist in relation to civil society.

The exhibition brings together a significant body of works from the Van Abbemuseum Eindhoven by the Russian avant garde artist El Lizzitsky (1890 – 1941), one of the most influential artists of the 20th century, who is shown here for the first time in Ireland. El Lizzitsky was an enthusiastic supporter of the Russian Revolution, for him the construction of the Soviet Union meant the opportunity to break away from traditional constraints. He used it to develop visions of a collective aesthetic of the new world, which he then embodied in his artworks.

These important El Lissitzky works, including a significant body of his noted ‘Proun’ series, are shown in the context of archive material referencing the work Irish nationalist poet and writer Alice Milligan (1865-1953), and her collaborator Maud Gonne (1866 – 1953). The exhibition explores their parallel visions of the activated artist central to the imagining of a new state. El Lissitzky and Milligan both envisaged their creative practices as tools for social and political change, although realising this through very different aesthetic languages and strategies. What becomes clear is the conviction and active participation in the task at hand: the artist as an active in the formation of the new world order.

A contemporary counterpoint to the historical narrative is provided by the work of four artists – Rossella Biscotti, Núria Güell, Sarah Pierce and Hito Steyerl – whose work, in different ways, reflects on the position of the artist within our society now, challenging our position as individuals within the mechanics of the state and questioning the role of art in reflecting a cohesive experience of civil society.

The participation of the Dutch-based artist Rossella Biscotti is made possible with financial support from the Mondriaan Fund.

El Lissitzky was an artist, designer, teacher, and theorist of the Russian avant-garde. Trained as an architect in Germany in the 1910s, in the years just after the 1917 Revolution, he turned to Abstraction, which he believed was the most effective tool for pursuing a new art for a new, post-revolutionary world. He made drawings, prints, and paintings of abstract geometric planes of colour floating against a neutral background, and incorporated a broad range of materials into them. He referred to these works by the word Proun, from the acronym for “project for the affirmation of the new” in Russian, and called them “interchange stations between painting and architecture.” In his design work, typographical elements are the building blocks for abstract compositions, and language disassociated from its conventional literary context acquires new meaning. His books, pamphlets, and posters were made to be disseminated widely and used by the masses.

Gallery Discussion | El Lissitzky: The Artist and the State

On the closing weekend of El Lissitzky: The Artist and the State, Catherine Morris presents a lecture on her research into the art historical and cultural contexts of Russia and Ireland, which links together the work and ideas of key revolutionary figures Maud Gonne, Yeats and El Lissitzky in the early years of the 20th-century. Followed by a discussion addressing Lissitzky’s enthusiasm for the revolution and the relevance of his ideas for contemporary artists and society, as Ireland approaches its centenary year of 1916. Discussion participants include; Rossella Biscotti, Núria Güell, Sarah Pierce, Seamus Nolan, Charles Esche, Annie Fletcher and others. A closing reception follows this event.

Booking is essential for talks. Free tickets available on www.imma.ie.