Eimear Walshe: The Land For The People 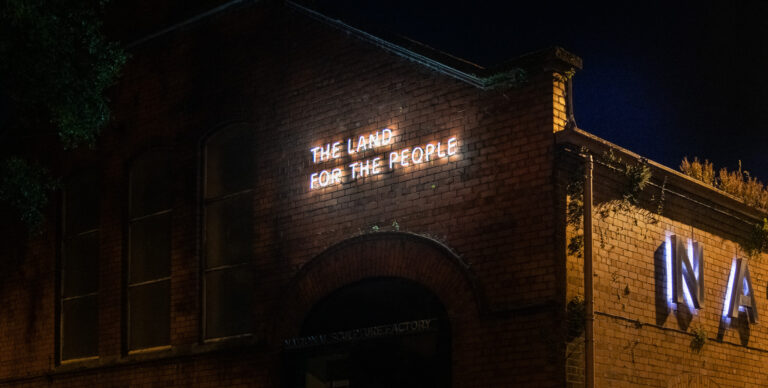 The Land For The People: The Sexual Case For Land Reform In Ireland

This workbook by Eimear Walshe highlights the relevance of 19th century land conflict in the present day. The pamphlet presents a series of challenges to members Irish society through accessible exercises on themes including inheritance, displacement, community organising, and revenge.

Purchase a copy via PayPal by clicking the link below, the publication costs €5 and be sure to include your name and address.

Alternatively, if you don’t have PayPal, an online order form can be requested by emailing info@nationalsculpturefactory.com

The National Sculpture Factory are proud to present their most recent commission – The Land for the People by Eimear Walshe.

It comprises of a temporary neon sculpture placed on the front facade of the National Sculpture Factory building and a new publication/workbook of the same name. The neon artwork was launched on Monday 21st of June and will continue to light up nightly between the summer and winter solstices – 21st June to 21st December 2021. Running concurrently with the launch of this new neon commission was the launch of an interactive publication based on 19th century political pamphlets created by Eimear as part of this Land for the People commission. The publication is now available for purchase through the National Sculpture Factory.

This new commission draws upon Eimear’s research in 19th and early 20th century land contestation in Ireland, and its significance in the contemporary era. The project is a continuation of a theme in Walshe’s work which prompts re-imagining land ownership and land use in Ireland.

Eimear Walshe is an artist, writer, and educator from Longford. Their practice is based on research in fiscal and sexual economies and histories, working to reconcile the aesthetics, values and tastes of their queer and rural subjectivity in the production of sculpture, publishing, performances, and lectures. Walshe lives and works in county Longford. Recent projects and presentations include a Platform Commission for the 39th EVA International; The Department of Sexual Revolution Studies, Van Abbemuseum / Design Academy Eindhoven (2018); Miraculous Thirst: How to get off in days of deprivation, curated by Daniel Bermingham, Galway Arts Centre (2018); and Separatist Tendencies for The Deviant Programme, Van Abbemuseum (2017).