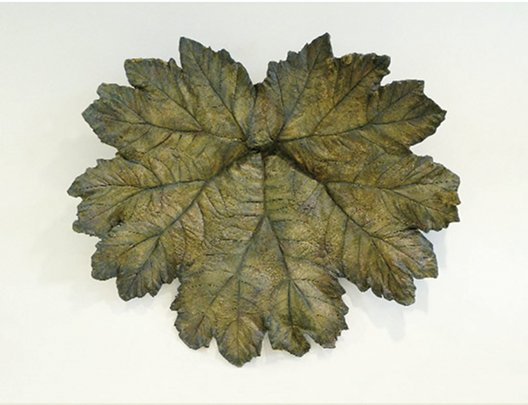 Haptic, an exhibition of 38 works by the well known and established sculptor Eilís O’Connell RHA, will include works made from 2007 to present.

Haptic refers to the sense of touch, in particular relating to the perception and manipulating of objects (from the Greek haptikos able to touch, grasp, fasten onto).

Having worked in a rural location for the last five years, O’Connell’s work has profoundly changed, it appears less urban and relates more to the natural environment. O’Connell explains “surrounded by fields and the activity of agriculture, the urgency of growth fuels my imagination. After the growing season I collect dried out stalks and husks and they have become a new source of material in the studio.”

O’Connell’s work explores the combination of very high tech materials with organic detritus from the earth. In the large scale piece, Antennae stalks from the New Zealand Flax have been wrapped in glass cloth then saturated in resin. In the Found/Given series fragile items that O’Connell has collected or been given, such as nests, pieces of coral, seed heads and sheeps skull have been cast in clear resin, to protect them.

Other works shown will include a series of bronzes titled Unlikely Monuments which explore ideas for potential large scale works. As O’Connell says “when I work on this scale I am always thinking big. I am interested in the physicality of sculpture, the act of walking around if gives it authenticity, the sense that it is part of the real world. Experimenting with new materials motivates me to find new ways to make things, yet the material I return to is always metal, bronze in particular for it’s resilience and timelessness.”

The forms that O’Connell’s sculptures take relate directly to the organic world, juxtaposed with the materials used, they give us a greater appreciation of our natural environment.

O’Connell received the Art & Work Award for her sculptures at 99 Bishopsgate from the Wapping Arts Trust and in 1998 won a Royal Society of Arts Award. She has represented Ireland at the Paris Biennale in 1982 and the Sao Paolo Biennale in 1985.

The majority of her commissions are in the U.K. the most significant being: Secret Station made in 1992 using bronze, fibre optic light, and steam for the Cardiff Bay Arts Trust at the Gateway, Cardiff. Vowel of Earth Dreaming its Root, a 12 meter high Kilkenny limestone sculpture for the London Docklands Development Corporation at Marsh Wall, The Isle of Dogs, London. Pero Foot Bridge a rolling bascule bridge 54 meters long designed in collaboration with Ove Arup Engineers, London in 1999.

She has completed two sculpture commissions for Lismore Castle in Co. Waterford. In 2002 her large bronze Unfurl was lent by the Cass Foundation to the Venice Biennale and her smaller sculptures were shown at the Guggenheim Museum. Since moving back to Ireland she continues to work on commissions abroad and has begun doing commissions here, the most notable being Reedpod a 13.5 meter sculpture in hand beaten copper and stainless steel for Lapps Quay in Cork, commissioned by Howard Holdings. She has set up a large studio in a renovated creamery in the hills north west of Cork city.