Efforts and Ideals: Prints of the First World War 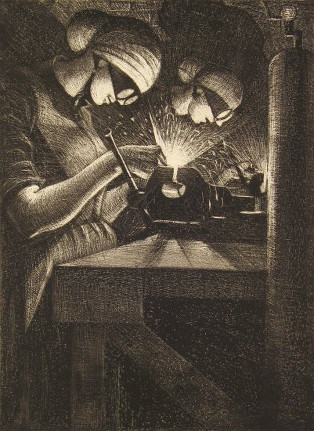 In 1917 the British Ministry of Information commissioned several well-known British artists to produce a series of images on different aspects of the war effort. The aim was to encourage a war-weary public and raise support for the war effort. The images by various artists illustrate some of the changing attitudes at the time such as the role of women in the war, the industry of war and the casualties of war. The lithographs were divided into “Efforts” with nine artists producing six lithographs each on different aspects of the war effort, including Christopher Wynne Nevinson, William Rothenstein and Claude Shepperson.

A further twelve artists were commissioned to produce a single image representing the “Ideals” for which the war was fought. These included, amongst others, Augustus John, Frank Brangwyn, George Clausen, Edmund Dulac, Charles Ricketts and Charles Shannon. Many of these artists are also represented in the collection of the Hugh Lane Gallery. All the lithographs, 66 in total, were produced in editions of 200 and the subscription price for a complete set was 100 guineas. The prospectus published on January 1, 1919 described the series as “a first attempt by a number of British artists, working in unison, to put on record some aspects of the activities called forth by the Great War, and Ideals by which those activities were inspired.” The prints were published by the Fine Art Society and produced under the direction of Ernest Jackson, himself a contributor to the “Ideals” series.