Echoes from the Past and Whispers of the Future 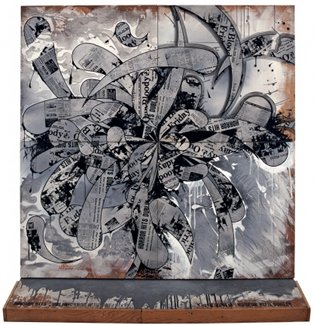 From the foundation of a modest collection of nineteenth century watercolours, donated to the Kilkenny Art Gallery Society by George Pennefather in 1943, the Butler Gallery permanent collection has since continued to flourish through gift, loan and purchase. The Butler Gallery has an on-going commitment to keep this diverse collection fluid, exhibited and enjoyed by the public. The collection will soon have its own home in a dedicated wing of the new location of the Butler Gallery at Evans Home, opening this extraordinary resource in a more permanent way to the people of Kilkenny and its visitors.

In the spirit of the enthusiasm with which this collection began, at the hands of the people of Kilkenny, the Gallery has invited two groups formed within its Education Programme to delve into this rich resource making their selection to shape the first exhibition of 2013, a year which also marks the 70th Anniversary of the Butler Gallery. Red Square has been active since 2010, inviting 15-19 year olds to explore and critique the arts in Kilkenny. The Butler Gallery Adult Critics first came together during the Bealtaine Festival in May 2012, because of a shared interest in learning more about contemporary visual art. The group met regularly during the summer months, first collaborating with the Red Square Young Critics during the Kilkenny Arts Festival.

In considering their approach to this exhibition, which opens on the cusp of 2013, the group sought to recognise the simultaneous existence of hope at a time when darkness can surround us, both literally and metaphorically, seeking out work that was at once fragile, yet full of strength. This selection features works that have become beloved favourites of the people of Kilkenny, as well as work newly acquired by the Gallery in 2010 and 2012. Through their selection, the group wished to reflect the broad character of the collection, embracing a variety of genres and artists such as Mainie Jellet, Patrick Scott, Michael Farrell, Tony O’Malley, Aideen Barry and James Turrell.

With grateful thanks to the funders of the project; the Arts Council Young Ensemble Scheme, Kilkenny County Council and the European Regional Development Fund through the Ireland Wales Programme 2007 – 13.

The Butler Gallery actively promotes and affirms the value of the arts to society through a diverse programme of contemporary exhibitions, which reflect the constantly changing nature of visual art practice. The Gallery has a significant permanent collection, which is maintained and safeguarded for the future. Butler Gallery has also developed a significant programme of innovative education projects encouraging the participation of diverse audiences in the activities of Butler Gallery, including family, school, youth, adult and older age programmes. These opportunities encourage meaningful public engagement and contribute to the development of an audience of diverse age groups, backgrounds and abilities. In 2008 Butler Gallery was awarded Full Museum Accreditation in 2008 from The Heritage Council of Ireland’s Museum Accreditation Scheme for excellence in Caring for Collections, Museum Management, and Exhibition, Education and Visitor Services.

The Red Square Young Critics programme has encouraged the participation of young people in the Kilkenny Arts Festival since 2010. Each year, the critics have examined and explored aspects of the visual art and theatre strands of the Kilkenny Arts Festival, discussing, debating and arriving at well-formed opinions, which they have shared with the public through the group’s blog and in 2011, a short documentary film. In 2012, the group collaborated with the newly formed Butler Gallery Adult Critics and the Galway Art Centre’s Red Bird youth arts organisation.

The Butler Gallery Adult Critics formed during the Bealtaine Festival 2012, celebrating creativity as we age. This intergenerational group aims to encourage critical thinking among adults interested in theatre and contemporary visual art. This project was developed by Butler Gallery in collaboration with Barnstorm Theatre and is part funded by the European Regional Development Fund through the Ireland Wales Programme 2007-13.