Eamon Colman: There is no season for margins 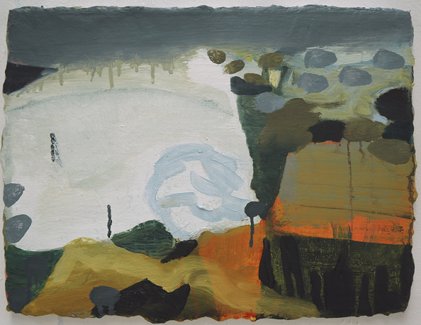 Colman is a walker, adopting the approach of the anthropologist and ethnographer in his quest for being at one, bringing himself into relation with nature. He gives voice to an encounter, portraying subjects such as snoring owls, apple trees, snow, rain, memory and time and to that which bares the trace of human significance, as an imprint of a culture through his use of paint and colour. The experiential feeds his paintings as an elaboration of nature itself as seen through the artist’s eyes.

The paint surface is saturated and layered with intention, inspired by the artistic evocation from nature. Both the subtle and the sublime in nature witnessed through the seasons which we measure ourselves against, the most awesome infinity of the world can allow us to become conscious of our finitude and frailty is what lies at the heart of Colman’s new body of work.

The paintings in this exhibition in oil on linen are built up and out from the regularity of the straight edge, without a frame referencing the said finitude. The human condition may attempt to adjust nature at the edges with boundaries, ploughed fields and plantations, but our reaction to nature if directed acknowledges that nature is uncontained, without an external frame, reaching infinity.

A series of paintings on newspaper presented in clear Perspex boxes speak of the frailty inherent in nature, of time passing in the present referencing life and our uber fast tweet age. Each momentary experience for Colman is attempting to be held onto and preserved. He is a collector of moments, experiences, evocations who distills nature’s meaning through the medium of paint.

Eamon Colman was born in 1957 in Dublin. He is one of Ireland’s foremost painters and a member of Aosdána. Since 1980 Eamon has had over 30 solo exhibitions in Ireland and abroad including an invited mid-term retrospective at The RHA Gallagher Gallery 1997, invited by The Cecille R. Hunt Museum, Webster University St. Louis, USA 2008. He has won many awards including a one year travel award by The Calcutta Artists Union in 1989 and was the first Irish artist to win a Full Fellowship to The Vermont Studio Center 2002, a Fellow of The Ballinglen Arts Foundation and was awarded a CCAT Interreg Major Award to tour an extensive exhibition in Wales in 2005. He won first prize in painting in EV+A 1989 and in Éigse 2001. He is represented in all the main Public Collections in Ireland and in Private Collections internationally including the Gordon Lambert Collection at IMMA, KPMG, Deutsche Bank, AIB, Bank of Ireland, Citibank, OPW, Smurfit Ireland Grp., Fyffes Ireland, American Express. Publications on the artist include: The Irish Arts Review (Spring 2007); Eamon Colman (Profile 25, Gandon Editions, 2006); Dictionary of Living Irish Artists, (Robert O’Byrne, Plurabelle Publishing, 2010).