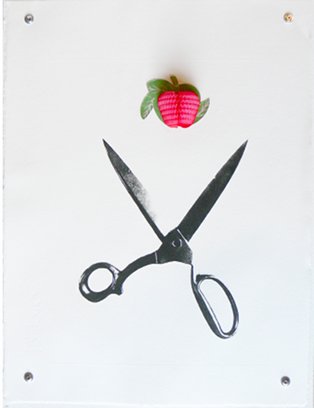 Drawing can be thought of as the ground from which all other arts originate as the origins of ideas are often realized in drawing before being translated into other mediums. For the artists in DRAWN/OVERDRAWN, drawing comes out of a multi disciplinary practice The four artists in this show are all now resident in the U.S but both Rian Kerrane and Malcolm McClay originate from Ireland, all however have made specific works for

this show that are made in response to Ireland’s physical and economic climate and landscape.

DRAWN/OVERDRAWN comes at a time when Ireland is severely overdrawn on its accounts, and this exhibition’s title refers to this situation. Kerrane’s work incorporates the actual material iconography of Banc na hÉíreann within a matrix that brings to mind puzzles and games, combining corporate iconography with objects from the intimate daily life of Ireland’s people. McClay’s work also confronts the fallen condition of the Irish economy in drawings that emerged from his photographs of some of the thousands of abandoned building sites that litter the Irish landscape. While these artists engage with the economic crisis, Louisiana-based Chicory Miles’s watercolors speak of recovery, giving graphic form to Irish landscapes that are growing back from devastating fires. Colorado artist Eric Waldemar’s works refer to the ‘overdrawn’ in a different way, engaging with the mystical depth and misty horizons that have drawn artists to Ireland for centuries. While Ireland’s landscapes and half-glimpsed fairy folk are so “overdrawn” as to border on cliché, the spiritual depth of the Irish land has a continuing resonance.

Like the above quote from Richard Serra suggests, drawing can take any format and is primarily about the activity or gesture itself. The activity of ‘drawing’ whether this be formatted via multiples or grids, or by virtue of line, tone or texture or even by the use of frames and moving images suggests a relationship between the concept and the activity itself. Preparatory drawing often gives visual form to an artist’s thought process and it

is through this activity that intentions and concepts may be first realized. This exhibition brings together four very different contemporary artists who have diverse practices, but come together under a shared desire to explore similar or common themes or concepts, through their unique drawing methodologies and practices.