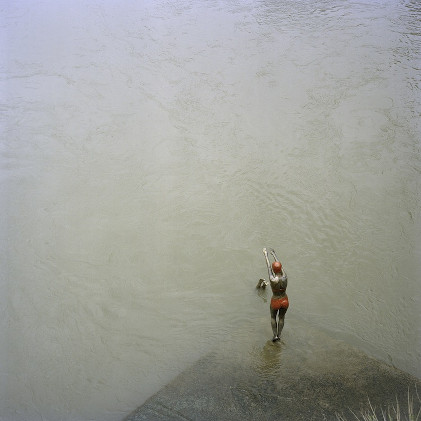 Yugoslavia fell apart in 1991. With the disappearance of the country, at least one million five hundred thousand Yugoslavs vanished, like the citizens of Atlantis, into the realm of imaginary places and people. Today, in the countries that came into being after Yugoslavia’s disintegration, there is a total denial of the Yugoslav identity. Dragana Jurišić’s practice looks at the effects of exile and displacement on memory and identity and it is produced from the position of an exile. Now, more than twenty years after the war(s) started, Jurišić feels at the safe distance to recall and question her own memories of both the place and the events she personally experienced.

“I am calling myself an exile, and not an expatriate – because I can’t, even if I wanted to – return ‘home’. During the 1990 census, I was also denied the right to be Yugoslav, the nationality I identified myself with since birth. (Being a child of a Croatian father and a Serbian mother, this left me somewhat confused.) The census researcher’s answer to why this was impossibility, mirrored very closely something that Mussolini said: “Yugoslavia does not exist. It is a heterogeneous conglomerate which you cobbled together in Paris.”

Central to this project is a work of an Anglo-Irish writer Rebecca West and her masterpiece Black Lamb and Grey Falcon, 1941. “There proceeds steadily from that place a stream of events which are a source of danger to me”, she wrote in 1937. “That place” was Yugoslavia, the country in which Jurišić was born. Realizing that to know nothing of an area that threatened her safety was a calamity, she embarked on a journey through Yugoslavia. The resulting body of work, initially intended as a snap book, spiralled into half a million words, a portrait not just of Yugoslavia, but also of Europe on the brink of the Second World War, and widely regarded as one of the masterpieces of the 20th century. Rebecca West thought of Yugoslavia as her motherland. The reason why this might be the case, is that by its very nature Yugoslavia was a land of displaced peoples. Rebecca West shared their fate. Born to an Anglo-Irish family, she never felt like she truly belonged anywhere. “In any class I feel at home, and I am never accepted, because of the traces I bear of my other origins.” She said that she could only remember things if she has a pencil in her hand, so she can write it down and play with it. The reason she wrote half a million words about the country she knew will soon be only a memory, is because she did not want to forget anything about it, and because she wanted to preserve this memory for millions of Yugoslavs who now live in exile. She thought of art as re-living of experience.

YU: The Lost Country was originally conceived as a recreation of a homeland that was lost, a journey in which I would somehow draw a magical circle (I was following Roland Barthes’ assertion that photography is more akin to magic than to art) around the country that was once mine and resurrect it. Instead, it was a journey of rejection, of displacement and exile that was stronger back ‘home’ than in the foreign place where I chose to live. Photography, contains elements such as fleetingness, which allow it to capture that sense of rootlessness and dislocation with relative ease. Both exile and photography intensify our perception of the world. In both the memory is in its underlying core. Both are characterised by melancholy. At Easter in 2011, In search of both the lost country and the lost identity, I started retracing West’s journey and re-interpreting her masterpiece by using photography and text in an attempt to re-live my experience of Yugoslavia and to re-examine the conflicting emotions and memories of the country that ‘was’.
–Dragana Jurišić.

Since receiving a distinction for her MFA, University of Wales, Newport in 2008, Dragana Jurišić was selected as an Axis MAstar in 2009 (a selection of the most promising artists coming out of the leading MFA’s in the UK). In 2010, she received the Arts Council of Ireland Travel and Training Award. In 2011, the artist won the Royal Hibernian Academy’s Emerging Photographic Artist Award, Arts Council Ireland Travel and Training Award and Culture Ireland funding, as well as the Graduate Student Prize from The International Rebecca West Society. In 2012, Jurišić received funding from Belfast Exposed and the Arts Council Ireland award. In 2013, Jurišić won a Bursary Award. She has exhibited internationally and her work is part of the Irish State Art Collection, University of Michigan collection and many private collections. In December 2013, Jurišić completed her PhD research at the European Centre for Photographic Research.