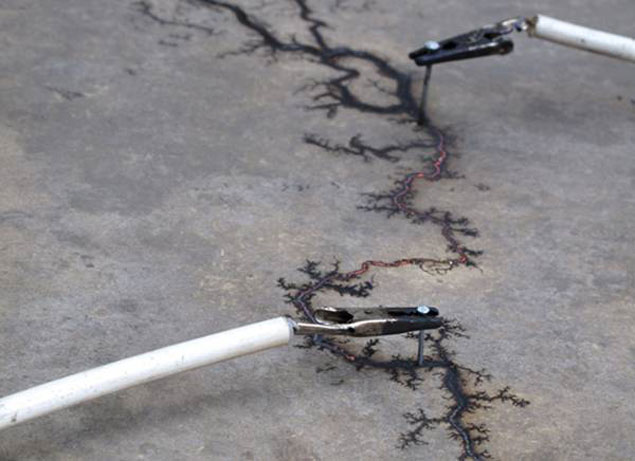 Douglas White’s works are always rooted in the appropriation of found materials. There is “an inherent reality in them”, he says. This reality has attracted him since childhood. While in Belize for one of his exhibitions, he collected burst retread tyre fragments, and made a tree out of them. This piece, the “Icarus Palm”, turns urban debris into a whole new natural entity.

Black Sun, his exhibition at Kevin Kavanagh, explores the transformation of materials under a new light: alchemy. Alchemy is both a philosophy and an ancient practice aiming at changing base metal into gold.

One of the pieces exhibited exemplifies the connection between Douglas White’s interest in the found materials and his new work about alchemy. It is an exploded tyre with tree roots growing out of it, forming the shape of a black sun. For alchemists, the black sun was an symbol of transformation and rebirth.

The other pieces presented develop the idea of transformation. An ‘in progress’ piece of wood investigates a phenomenon called a fractal burn. Fractal burn occurs when very high voltage passes through an insulating material, resulting in fine and beautiful hair-like shapes. The piece is presented in the middle of all laboratory equipment required to generate the burn. All the wood used is found, continuing the language of appropriation that runs through the work.

Douglas White, born 1977, is a young British artist. He has been awarded several prestigious prizes include the Deutche Bank Pyramid Award and the Jerwood Drawing Prize (shortlist) in 2005. He earned his BA from the Ruskin School of Drawing and Fine Art in Oxford, before going to the Royal College of Art to do his MA, from where he graduated in 2005. He has exhibited widely all over Europe. Previous solo shows include: Masquerade, Malta Contemporary Art, Valletta, 2009; Elephant Totem Song, Paradise Row, London, 2009; Hartrot, Gabriel Rolt, Amsterdam, 2008; Black Palm, Nuke Gallery, Paris, 2007; Lilith, Paradise Row, London, 2007; and group shows include: Il faut être absolument moderne, Istanbul, 2009; Natural Wonders: New Art From London, Baibakov Arts Project, Moscow, 2009; Flight Of The Dodo, Project Arts Centre, Dublin, 2008; New Contemporaries 2006, The Coach Shed, Liverpool.