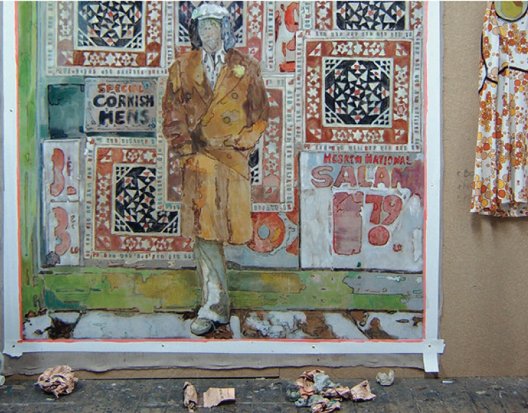 The third space gallery is pleased to present a new exhibition of paintings by Dougal McKenzie entitled hot and cool. The title of the exhibition can be read on a number of levels, referring to both the form and content of the paintings.

All pictures have colour temperatures at play – more often expressed in terms of warm / cool relationships. At certain stages in the process of making/ looking the painter may focus more on these formal values, with the ‘idea’ behind the work being put to one side for a time. This balancing act is perhaps more precarious for the painter when ideas of ‘history’ come into play.

McKenzie continues to be interested in the possibilities of history as a subject in painting, and how this relates to our world of proliferating screen imagery. He offers the following propositions in support of the work:

Proposition 1: We live in a heightened state of ‘image consciousness’. In 1979, whilst briefly in opposition, the Canadian politician Pierre Trudeau was advised by media studies guru Marshall McLuhan that by growing a beard he had ‘cooled his image by a few degrees.’ Hot and cool were terms that McLuhan used to distinguish between different forms of media communication (his use of ‘hot’ and ‘cool’ took on very different meanings to those outlined in Proposition 2.) In the McLuhan sense, is painting today a hot or cool medium?

Proposition 2: By the early 1970s the use of ‘hot’ and ‘cool’ in youth terminology was sounding outmoded. It was the time of Modernism’s dying embers, embodied in Otl Aicher’s geometric designs for the Munich Olympics and his sliding scale of warm and cool colours. It was also the last significant period of the protest song and mass youth demonstrations.

Proposition 3: In the terminology of Proposition 2 the distance runner Lasse Viren was cool, and also iconic. Training alone in the forests of Finland, rumours persisted that he engaged in ‘blood freezing’ to boost his RBC levels before a race.

Proposition 4: Paintings can still effectively co-habit the world of RGB screen imagery, with the painting’s ground providing a type of pixel structure. Painting potentially carries as many meaningful layers of narrative, when dealing with history’s events, as the screen does.