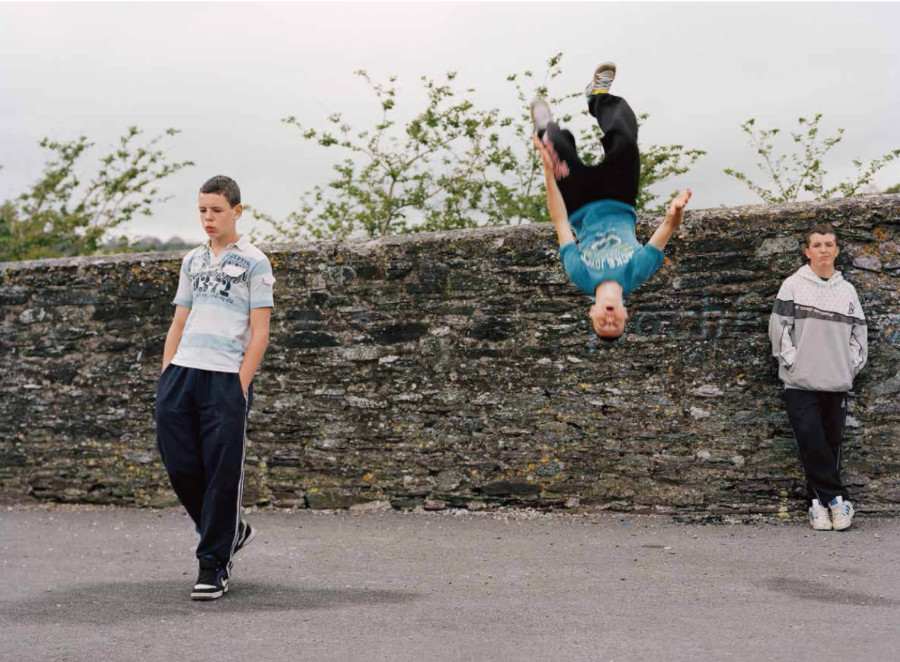 Crawford Art Gallery is delighted to present My Last Day at Seventeen by American artist-photographer Doug DuBois. Combining portraits, spontaneous encounters, and collaborative performances, the images of My Last Day at Seventeenexist in a delicate balance between documentary and fiction. The series looks at the bravado, adventure, fragility and inevitable loss of childhood.

What began as a month artist residency at Sirius Arts Centre, developed into a five year project, from 2009-2014, with DuBois spending his summers in the Irish coastal town of Cobh, Co. Cork. Working with an extraordinary group of young people from a housing estate area in Russell Heights, DuBois gained entry to the community when two of its residents, Kevin and Erin (who would later become one of the central subjects of his work), took him to a local hangout spot, opening his eyes “to a world of the not-quite adults, struggling—publicly and privately—through the last moments of their childhood.”

Doug DuBois’ photographs try to project his subjects into the future while honouring their present and their potential. ‘Life has limits and maybe one of the important signs of leaving childhood behind is understanding some of your limits and hopefully never ever forgetting your potential’ he observes.

The photographs, situated in the historic Sculpture Gallery and the Modern Galleries, offer ‘to honour the idea of being young’ says DuBois.  The exhibition also features a series of fourteen cartoons by Patrick Lynch which together creates a unique dialogue that mixes documentary and creative fiction echoing DuBois concept of the project.

The exhibition is produced in partnership with Sirius Arts Centre and with support by Aperture. With special thanks to Peggy-Sue Amision, Miranda Driscoll and Doug DuBois and the young people of Russell Heights.

Doug DuBois’ photographs are in the collection of the Museum of Modern Art in New York City; SFMOMA in San Francisco; J. Paul Getty Museum in Los Angeles; the Museum of Fine Art in Houston; the Library of Congress in Washington, D.C.; and the Victoria and Albert Museum, London.

DuBois’ photographs have been published by the Aperture Foundation, Museum of Modern Art, the J. Paul Getty Museum, Double Take, the Picture Project, the Friends of Photography, and in magazines, including The New York Times, Details, Black Book, The Guardian; The Telegraph (London), and Monopol (Berlin). www.dougdubois.com