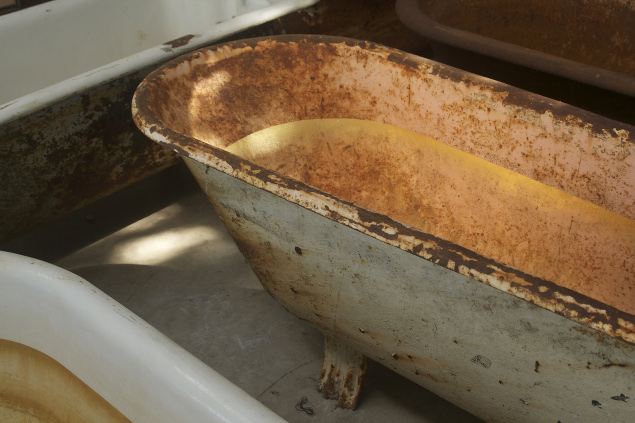 For a decade Cross has used representations and the skins of sharks as a recurring theme in her practice. In Eye of Shark the presence of the animal acts as a metaphor for an alternative vision, rooted in the symbolism of the St Carthage Hall as a former place of worship. The literal eye of a shark is housed within the walls gazing upon the congregation, yet hidden from view within a gilded vessel.

The congregation is made real by the grouping of nine reclaimed cast-iron baths, arranged in lines down the centre of the hall. Each bath has been lined with gold along the scum line, where the dirt normally accumulates, suggesting an alchemical transformation from dirt to gold. This line of gold lies at the place where air meets water and beneath the surface of water, below the depths, is home to shark.

Eye of Shark takes reference from many sources including Macbeth (…in the cauldron boyle and bake, eye of newt, and toe of frog…), the Eye of Providence (the all seeing eye of God) and the fear of the unknown that is invoked in us by the presence of the shark.

View, a companion show to Eye Of Shark, taking place at Kerlin Gallery Dublin, from 5 September – 18 October 2014, includes new photography, sculptures and an intervention in the gallery space.

St Carthage Hall is located on Chapel Street, Lismore (behind Lismore Heritage Centre) and is open Friday, Saturday & Sunday from 1pm to 6pm. Admission is free.

This exhibition is kindly supported by The Arts Council/ An Chomhairle Ealaíon through the Visual Art Project Award.

Working in sculpture, film and photography, Dorothy Cross examines the relationship between living beings and the natural world. Recent solo exhibitions have included RHA, Dublin (2014) Turner Contemporary, UK (2013), Bloomberg Space, London (2009) and McMullen Museum Boston College USA (2005). The artist has also participated in the Venice Biennale (1993), Istanbul Biennial (1997) and Liverpool Biennial (1998). She took part in the ground-breaking 1994 exhibition ‘Bad Girls’ at the ICA London and CCA, Glasgow. Her opera works include Chiasm (1999); Pergolesi’s Stabat Mater (2004); and Riders to the Sea at English National Opera (2008). Cross’s work can be found in many collections from the Irish Museum of Modern Art, Dublin; to Tate Modern, London. Cross is curating a major exhibition, Trove, at IMMA in November 2014 featuring works from the permanent collections of Ireland’s national art institutions.

In 2011 Lismore Castle Arts: St Carthage Hall was opened as a second exhibition venue, for Lismore Castle Arts, in the town of Lismore. The hall was built in the late nineteenth century as a place of worship. To date artists who have exhibited include Camille Henrot, William McKeown, Roman Signer, Superflex, TJ Wilcox and Corban Walker.