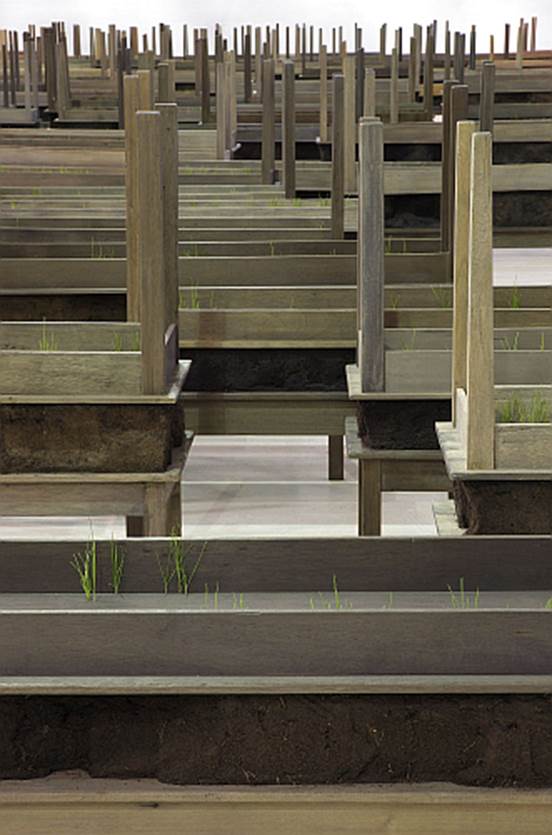 IMMA presents a major exhibition by renowned Colombian artist Doris Salcedo (b1958, Bogotá), her first solo exhibition in Ireland. Salcedo is one of the world’s leading sculptors whose work is deeply rooted in her native Colombia.

Doris Salcedo makes sculpture and installations that function as historical witness and memorial, using ordinary domestic materials charged with significance and saturated with meanings accumulated over years of use in everyday life. Salcedo often takes specific historical events, and experiences of loss and violence, as her point of departure. Her work involves extensive research to convey burdens and conflicts with precise and economical means. Some of her best-known installations include her 2007 Unilever commission at Tate Modern; Salcedo created Shibboleth, a chasm or fissure running the length of the Turbine Hall that represented exclusion, separation and otherness.

IMMA’s Director, Annie Fletcher, on the significance of showing Salcedo’s work at IMMA said; “We are so lucky to have Doris Salcedo coming to our shores to share with us in her most eloquent and singular way the sheer power and beauty of her monumental art practice. It is a masterful lesson in what art can do. Her practice serves as a gift; understanding and translating for all of us, in the most intimate and intelligent way, the trauma of violence and yet reinforces so compassionately the ability to survive and the will to resist”.

Acts of Mourning brings together two substantial installation works A Flor de Piel II (2013-2014) and Plegaria Muda (2008-2010) that are rarely seen together, as well as works from the Disremembered (2014-2017), Atrabiliarios (1996) and Untitled – Furniture Works (1990-2016) series. The artist’s most recent sculpture seriesTabula Rasa (2018), which is inspired by Salcedo’s conversations with survivors of sexual violence at the hands of armed men, is also included.

Each work in the exhibition performs a gesture of mourning, at once delicately beautiful yet silently brutal. The overall experience of the exhibition may be read as a site of remembrance or memorial, an invitation to reflect on personal and collective trauma and brutality within human experience and historic moments.

Described by the artist as a shroud, A Flor de Piel II (2013-2014) is composed entirely of rose petals that have been treated and preserved, in effect, suspending them between life and death. The petals are sutured together by hand. This piece developed out of Salcedo’s research into the story of a nurse in Colombia who after overcoming great obstacles in her life, was kidnapped and tortured to death. Salcedo explains that A Flor de Piel II started with the simple intention of making a flower offering to a victim of torture, in an attempt to perform the funerary ritual that was denied to her.

In its largest manifestation, Plegaria Muda (2008-2010) comprises of 165 units, all of which are made from wood obtained from demolished houses in Bogotá. Each individual unit consists of two tables, the surface of the underside of each upturned table has a unique pattern of almost invisible punctures through which thin blades of grass grow over time, having been originally grown from small grass seedlings. The inspiration for this work is drawn from many sources, perhaps most directly it speaks to recent events in Colombia, where members of the army killed innocent citizens. Bodies of the victims were dumped into mass graves and the size and shape of each unit here is that of a standard coffin. Salcedo has worked closely with the victims’ families and in Plegaria Muda the individual is given a unique memorial, which is reflected in the title that loosely translates into English meaning as ‘silent prayer’.

Tabula Rasa (2018), meaning “clean slate”, is a new work inspired by Salcedo’s conversations with survivors of sexual violence at the hands of armed men. Consisting of worn, wooden domestic tables subjected to a brutal and complex cycle of destruction and reconstruction, the sculptures suggest how, after such experiences, one can never be whole again since the self will always be changed or ‘lacking’. After being strategically damaged and splintered, each table is painstakingly ‘repaired’, glued back together fragment by fragment over a lengthy period of time. Although at first glance appearing complete and ‘whole’, they remain, in fact, a fragile composite of tiny parts, rebuilt as faithfully as possible in an impossible act of recreation. Salcedo has described her sculpture as a ‘topology of mourning’.

Other works in the exhibition include, Disremembered (2014-2017), here four seemingly fragile spectre-like sculptures based on the form of a blouse, belonging to the artist, speak to the materiality of mourning. The idea for this series developed from interviews Salcedo conducted with Chicago mothers who had lost children to gun violence. Handwoven thread by thread and needle by needle, each delicate but menacing garment embodies a painstaking gesture of mourning.

Also included are two works from the Atrabiliarios (1996) series. In the early 1990s, Salcedo  researched the lasting affects of violence through extensive fieldwork across Colombia. During this time, she learned that female victims were treated with particular cruelty and that shoes were often used to identify remains. InAtrabiliarios, worn shoes, primarily women’s, are incased in niches embedded into the gallery wall.

Four works are included from Salcedo’s Untitled – Furniture Works (1990-2016), one of her largest bodies of work to date. Based on extensive research with victims of political violence, Salcedo transforms their experience into sculptures that convey a sense of how their everyday lives are disrupted. Using everyday domestic furniture she fills them with concrete, rendering them functionless.

Artist Talk: Doris Salcedo
Thursday 25 April / 13.00 – 14.15 / The Lighthouse Cinema, Smithfield, Dublin 7
IMMA is delighted to present a lecture by Doris Salcedo. Introduced and moderated by IMMA’s new Director Annie Fletcher, Salcedo will discuss her major new exhibition Acts of Mourning. Reflecting on acts of ‘forgetting’ and ‘memory’ in artworks, Salcedo will explore the philosophical underpinnings of her most iconic bodies of work, set against the backdrop of global, geopolitical realities.
Booking fee applies – Ticket €6.00. Concession/IMMA Members €3.50. Please note this talk will take place at the Light House Cinema, Smithfield, Dublin 7.
Please contact the IMMA press office if you wish to attend this talk.