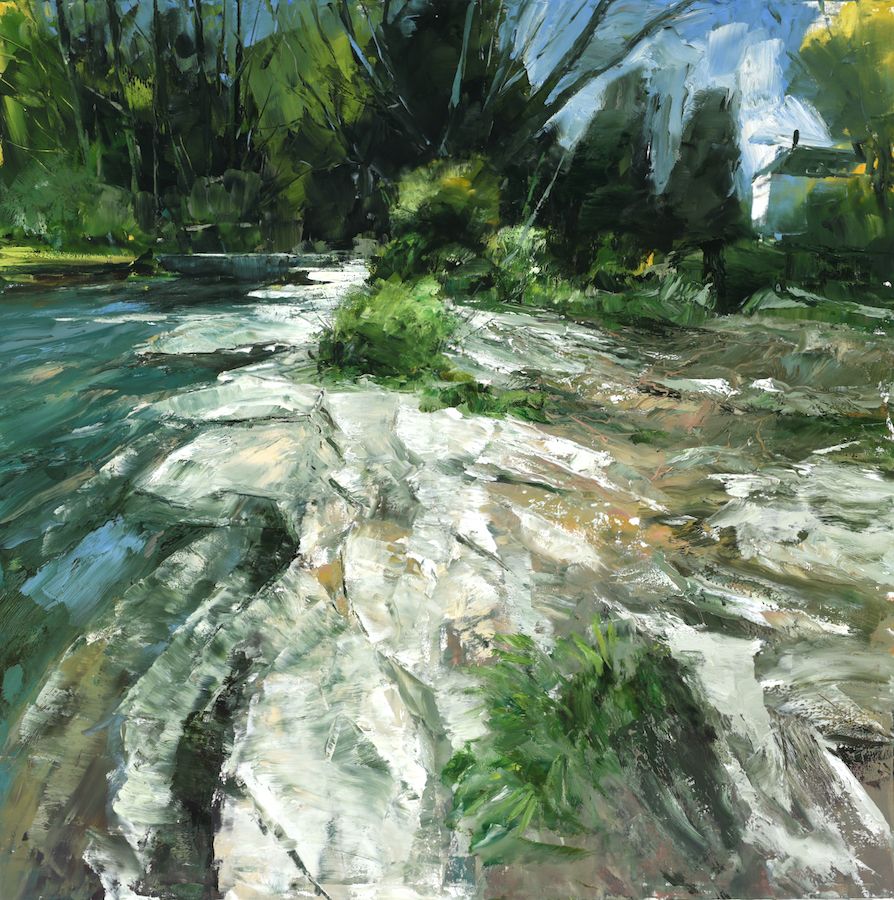 From Crum Creek, Philadelphia, Pennsylvania, USA to the west coast of Ireland and the streets of Paris, Decade traces Teskey’s remarkable skill in articulating the energy and tactility of nature.

Spreading large swaths of pigment across the canvas with trowels and palette knives, Teskey emphasises the vigour and transience of the natural world. As chaos and precision unite in nature to produce its splendour, so too do fluidity and order combine in Teskey’s application of paint, enlivening the elements that he depicts.

Teskey synthesises representation and abstraction in many of his paintings: at a distance, sharp, in-focus depictions of space are observed; move closer and image dissolves into paint.

Whether street, shore, stream or forest, Teskey’s renderings of the world around him are, at once, fleeting moments frozen in layers of paint, and animated representations of a pulsating natural world. Decade invites you to immerse yourself in the diverse qualities of Teskey’s artistic process and the places he depicts.

Donald Teskey RHA b.1956 is a graduate of Limerick School of Art and Design. Teskey came to prominence through his skill as a draughtsman during the 1980s.  Since1992 he has crafted out a substantial body of work as a painter focusing on landscape and the environment. His images reflect his response to the formal elements of composition; shape, form and fall of light resulting in powerful images of instantly recognisable parts of the landscape with large abstract passages and surfaces which articulate the relentless, energetic and elemental force of nature.

He is the recipient of residency awards and fellowships in Ireland and abroad, including the Ballinglen Arts Foundation, Ireland, 1996.Vermont Studio Centre, 2002 . The Josef and Annie Albers Foundation 2006 and Centre Culturel Irlandais in Paris, 2012. He had his first USA solo exhibition at the List Gallery, Swarthmore College PA in 2017 and was artist in residence at Swarthmore College funded by the William J. Cooper Foundation.

Teskey’s work has been exhibited in Ireland, the USA and the UK and in exhibitions on mainland Europe, Canada, China, and South Africa. Collections include the Irish Museum of Modern Art, National Gallery of Ireland, Yale University Art Gallery, Arts Council of Ireland, Limerick City Gallery, corporate and private collections worldwide.

He is represented by Oliver Sear Gallery, Dublin.