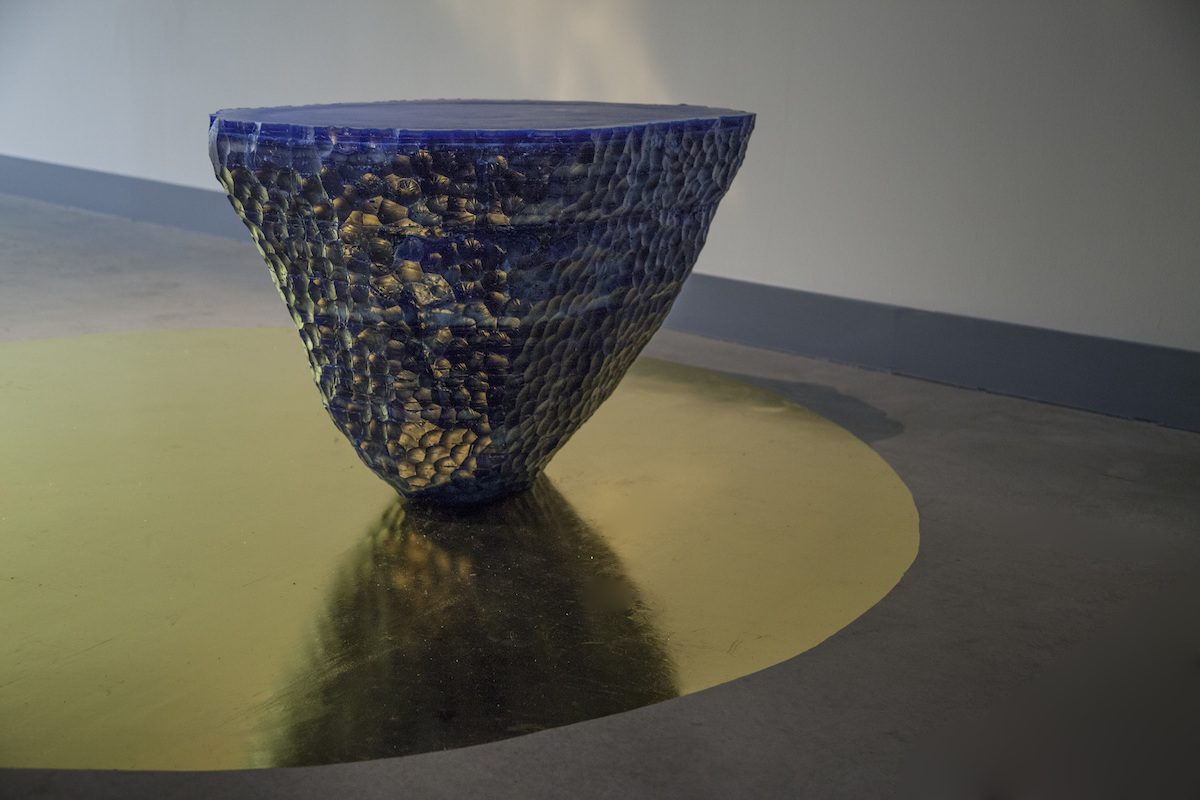 Co-curated by Mary Cremin and Peter Richards, the four artists presented use video, sculpture, found materials, and installation to create a dialogue between their work. The distinct qualities of each artist bleed into one another on encounter, creating ‘zones’ rather than spaces in which to explore our changing reality. Working to highlight the experience of the entire exhibition as a whole, different elements converge to provoke questions relating to exhibition making, encounter, and representation.

Al Sabah, Puthod, Hanna and Calvin are individually interested in contemporary consumerism, materiality and futuristic landscape. The exhibition considers today’s lifestyle, informed by our consumption of material goods. There is a glut, an overspill, and a crowding of ideologies reflecting each artist’s interpretation of our changing everyday reality. Michael Hanna’s piece explores the ideas of utopian communities and ways of living. The work uses as its starting point the utopian publication Looking Backward by Edward Bellamy; at the time of writing in 1888 the western world was going through a similar moment when the disparity within society and world politics was in crisis. Stuart Calvin’s work focuses on new age ideologies, his sculptural works are reminiscent of the symbols and connections that inhabit both the real and mystical landscape. The philosophical inquiry in his work explores our propensity and need to seek spiritual fulfilment in times of chaos. Bassam Al Sabah through his multi-media installation’s creates surreal animated landscapes that move from the physical to the mythological. His works are influenced by Japanese anime that use hyper surreal imagery embedded in the ideas of fantasy, Al Sabah deconstructs this language by referencing war imagery to reflect the experience of country’s divided by war. Liliane Puthod in contrast highlight’s our fetishisation of consumer culture; neon lights, the hum and glow of a fridge reference our consumer culture and the fabrication of desire through everyday objects.

This grouping of artists came about through studio visits and an idea of creating an exhibition that reflects our current moment, the artists areas of research compound that while we face the current political and global crisis our response and reaction reflects the complexity of our time and our means of translating this reality into artists practice.

Michael Hanna is an artist based in Belfast. His work takes a wide range of forms including text, video and immersive site-specific installation. Through this work he uses affective experience to explore connections between psychology, physicality and society. His current project examines utopian ideologies through representations in fiction and their real-world manifestations.

He is co-founder of the artist-run organisation AMINI (Artists’ Moving Image Northern Ireland). In 2018 Michael was selected for the Freelands Artist Programme, a 2 year fellowship with PS2, Belfast and Freelands Foundation, London. He has exhibited in the UK and internationally including Rencontres Internationales at Haus der Kulturen der Welt, Berlin and Multiplicity at NURTUREart, New York. Recent solo exhibitions include Looking Backward at PS2, Belfast, Short Films about Learning at Lismore Castle Arts, and Predictable Contact at the Naughton Gallery, Belfast.

Calvin’s installation and sculptural work draws on familiar symbolism from various religions and belief systems. His work explores incorporeal worlds, supernatural experiences and the human propensity to venerate and fetishize objects. Throughout Calvin’s work, references to New Age ideologies, superstitions and theories of consciousness are ever present. The work proposes a type of modem mysticism, forming connections between the visible and invisible, the physical and metaphysical.

Born in Belfast 1974, Stuart Calvin graduated from the University of Ulster in 2011 with a BA Hons in Fine and Applied Art and in 2016, a Masters degree in Fine Art. He has recently been awarded The Royal Society of British Sculptors Bursary. Calvin was the first recipient of the Annual Gerard Dillon Award and Solo Show, selected by the Arts committee of Culturlann Belfast. He received the University of Ulster Dean’s list award and bursary 2009.

Bassam Al Sabah’s work conveys visions of war, resistance and perseverance. He is concerned with how the past is continually revised to meet the present, when the juvenile fantasy breaks down into the reality of adulthood. He references Arabic dubbed Japanese anime series, which were broadcast across the middle-east from the 1980s. Tackling themes of revolution, war and exile, the work projects political meaning onto these cartoons, which have been connected with a cross generational identity, shared by now adult Arabs. Al Sabah draws attention to an ignored point in media globalization: the influence, effects and agendas of Japanese anime on Arab popular culture.

Al-Sabah graduated from IADT’s BA Visual Art Practice in 2016 and was awarded the RHA Graduate Studio Award. He was shortlisted for the RDS Visual Arts Awards, curated by Alice Maher. Recently he was part of a panel discussion, chaired by Cristín Leach, in Dublin Castle as part of Cruinniú na Cásca, and was listed by Gemma Tipton in the Irish Times as an artist to watch in 2017. Solo exhibitions of his work have been held at Eight (2017) and Dublin City Council’s The LAB (2018).

Liliane Puthod’s practice often takes the form of large-scale installations and sculptures. Her work is informed by research into ideas of mass-production and its perceived value in our globalised world. Often taking her immediate surroundings as a starting point for her creative work, she uses both handmade and industrialised materials. She draws on modes of display, the language of merchandising and is interested in examining the way forms can problematise the materials from which they are made. She is drawn to archaeology, contrasting contemporary mass-production with singularly produced repetitive objects, as a way to approach archaeological and commodified time.

Recent exhibitions include group show Display, Link and Cure at The Complex, Dublin, 2019, solo shows How Long After Best Before at Pallas Projects/Studios, Dublin, 2019 and Everything Must Go at PS2, Belfast, 2019. She is recipient of the Project Studio 2020-2021 at Temple Bar Gallery & Studios and her work is generously supported by the The Arts Council.

Mary Cremin is a curator, writer and art historian.  She is the Director of Void Gallery, Derry, where she commissioned the Turner Prize winning film The Long Note by artist Helen Cammock in 2019. She was the Commissioner and Curator of the Irish Pavilion at the Venice Biennale, 2019 with artist Eva Rothschild. Prior to this she was the Programme Curator of Temple Bar Gallery + Studios and the Artistic Director of The Treeline Project with Oonagh Young.

In 2015, she was Curator of TULCA Festival of Visual Art, Seachange, which included over 30 national and international artists. She has delivered large scale exhibitions and commissions such as Magnetism, Hazelwood Estate, Sligo, (2015), Richard Mosse, The Enclave, Irish Pavilion, Venice Biennale, (2013).