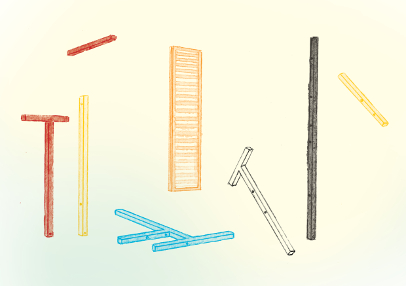 Art is not exhibited, art exhibits. Display Show initiates a set of artworks embedded with, and reliant upon, explicit conditions of display as a combination of functional attributes.

Display Show proposes to consider display as intrinsic to artistic production and interpretation, as the process of taking shape that redefines both notions of art as work and art as exhibition. In examining the politics of exhibition and display strategies, we seek to articulate practices more than critiques, and to this end find appropriate vocabularies, discern possible methodologies, and define relevant genealogies.

This exhibition project will be unfolded through an enquiry into forms of display, including an ongoing survey of radical display practices from the twentieth century, such as those of Franco Albini, Lina Bo Bardi, Frederick Kiesler, El Lissitzky, and Carlo Scarpa. These historical approaches will be considered through form and function and how they work in creating specific display conditions.

Display Show will evolve in time over a number of sites explicitly exhibiting the context specific nature of display – how it is always subject to change. In its first iteration at Dublin’s Temple Bar Gallery Display Show will propose permanent alterations to the physical fabric of the gallery, starting from propositions by Gavin Wade, Yelena Popova and Céline Condorelli made after historical displays, by designers including Frederick Kiesler, Herbert Bayer, Adolf Krischanitz, and Eileen Gray.

Second and third iterations will take place at Eastside Projects, Birmingham and Stroom Den Haag, Netherlands, later in 2015 and 2016 where Display Show will develop these approaches further by relating them to others, both from the ongoing material archive of the space, such as Carlo Scarpa’s panels for Palazzo Abatellis, Lina Bo Bardi’s museum display works, and Franco Albini’s plinths for Palazzo Rosso, and from a selection of new and recent artworks.

Throughout Display Show we will follow a path that leads from the notion of doing something to show things (the technical term for which, in twentieth century art discourse, has come to be described as the verb ‘to display’), to the notion that those actions not only change the way we see things, but are also a transformation of the things themselves as well as ourselves, in a process that corresponds to the alterations of existing conditions.

Can any object be separated from how it is shown, repaired, treated, classified, owned and valued? Studying instances of and engaging with those very processes reveals that it is precisely showing, repairing, treating, owning, valuing and classifying that determine the nature of the object, and if it is to be recognised as an object at all.