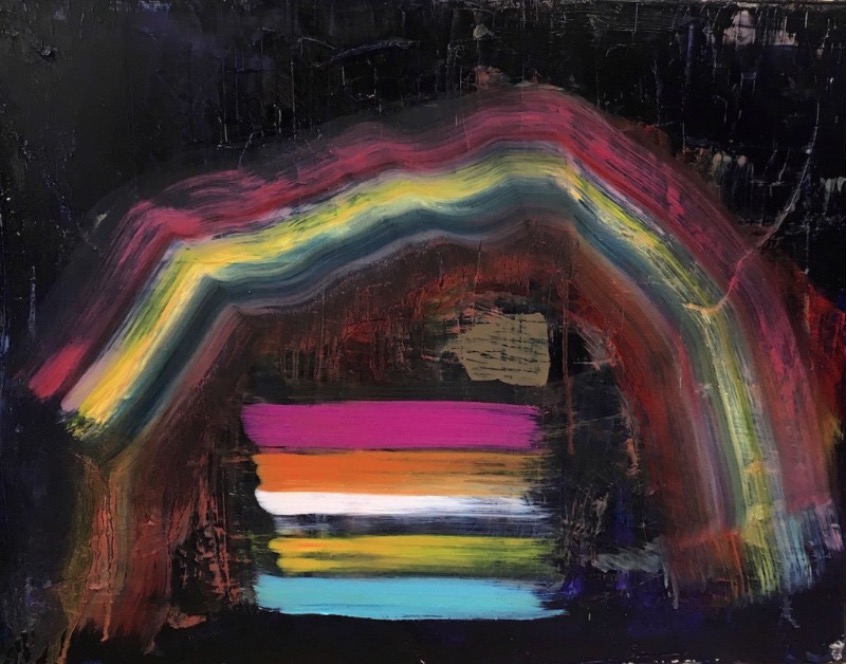 ‘As is well known, the word ‘orbit’ refers to a set route or path around a given point: we on earth orbit the sun, just as the moon orbits us. Perhaps less known, though, is that the word is etymologically coupled with a distinct sense of the optical: from a fourteenth century French word for ‘eye socket’. Seeing, in this understanding, is always underscored by a sense of movement or voyaging: when we look at someone or something, we simultaneously tread a track around it. Perhaps we come close to this object, but we don’t get to touch it.

I kept this double meaning in mind when thinking about Diana Copperwhite’s recent paintings. In this latest exhibition, Crooked Orbit, these are large and at least initially discordant works. It seems as though no colour has been left aside, from lurid fuchsias and cobalt blues, to neon yellow and swatches of minty green. Recurring throughout the canvases, there is also a gradient effect achieved by loading the brush with different shades of paint; and this has a consequence of suggesting that these paintings have almost outgrown the tools of their creation, those tools then being forced to convey, through colour, as much as they possibly can. Sometimes these gradient interventions are vertical and regular; at others, they are less uniform, cast in a halting semi-circle or upturned ‘u’. Throughout, they act to create the impression of space within the paintings: in one, a narrow swathe of grey, pink and white, has the look of an outstretched arm, a slight sag in the middle where the elbow could be; in another, a flat vertical plane of what looks like four gradient drags cuts a dint of architectural space. But, even when working in unison, each of these is just one gesture, loaded to capacity and worked until it dissipates, the paint run out or stopped short from further decline. Representation is at most, never quite; cast as it is though a series of distinct marks, the whole remains fragmentary, gestured towards but never quite pinned down’.

– Extracted from Awkward Angle of Perception, by Rebecca O’Dwyer. The full essay will be available at the gallery from June 1st.

Rebecca O’ Dwyer is an Irish art writer, critic, and PhD candidate at National College of Art & Design, Dublin. Her writing has been published in Paper Visual Art Journal, Enclave Review, Frieze, Eyeline, Fallow Media, and the Visual Artists’ New Sheet, amongst others, and she has written catalogue texts for artists including Kathy Tynan, Fergus Feehily and Barbara Knezevic. She is a previous winner of the VAI/DCC Critical Writing Award, and the editor of the online art-writing platform, Response to a Request, which was launched in August 2016.