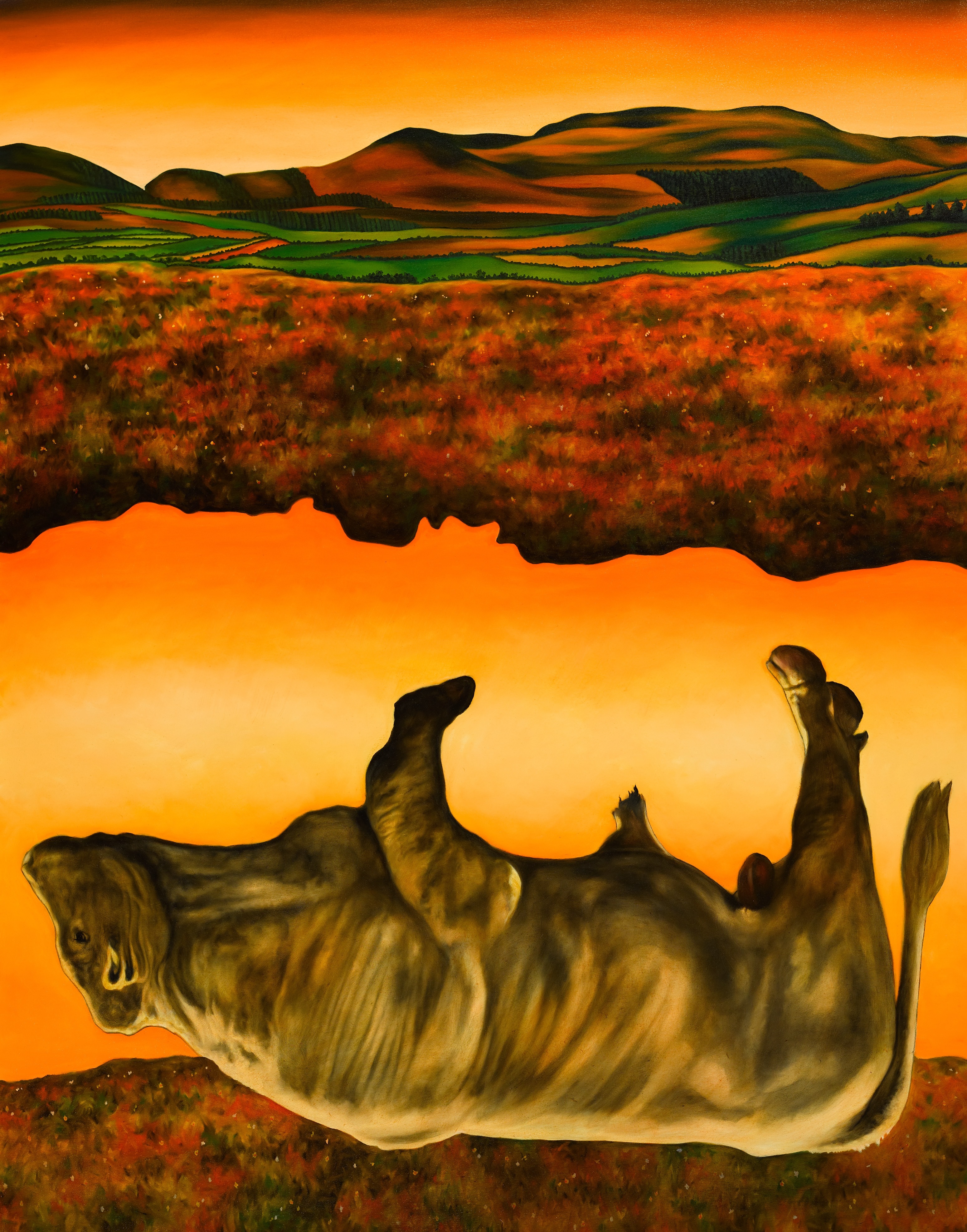 Kevin Kavanagh is pleased to present A Covid border tangle, an exhibition of new paintings  by Dermot Seymour.

Clearly puzzled by the artist’s priorities, a visitor to one of his exhibitions once enquired of Dermot Seymour: “Why all the cows?” Because, Seymour replied, there are nearly twice as many cows as people on the island of Ireland, and it seemed stranger to ignore them than to paint them. It was a fair point, if by no means the whole story. The fact is, he has always been drawn to the outsider viewpoints of animals, wild and domesticated, animals who share our world and usually bear the brunt of, to put it mildly, human oddity.

Seymour was born in Belfast. By the time he went to art college the Troubles were at their height. He was alert to and dismayed by a world in which everything was culturally and politically coded, including, he realised, animals. The identity of things, animate and inanimate, could always be used to place you on one or other side of the divide: a cow was never just a cow. With their bizarre juxtapositions of myriad elements, Seymour’s paintings at the time were sometimes labeled as surreal. But he was not and is not a surrealist. The surrealism was built into the reality he was addressing. That remains the case.

His recent work reflects the way contemporary political developments have injected new, frightening life into apparently dormant problems. With terrifying inevitability, Brexit machinations have revived the issues around the Irish border just as we were in the process of consigning them to the past, and even as covid-19 presents a novel set of challenges. Seymour’s animals, placid and monumental, bear mute, lugubrious witness to the hubris and delusions of their human overlords. They may inhabit mythologised landscapes – just as the artist himself lives in the long-idealised West – but they are stubbornly and magnificently down-to-earth. In The Bog of Disappearance, a mechanical digger labours in the background, perhaps probing for the bodies of the disappeared; the horrors of the past are too close to the surface, and too threatening, for comfort.

The artist’s riveting mode of hard, definite realism relates him to a Northern European tradition known for its incisive grasp of human vice and folly, occasionally with a satirical edge, as, notably, in the work of Pieter Bruegel the Elder.
– Aidan Dunne 2020

Dermot Seymour is an elected member of Aosdána and is the recipient of numerous awards including the Marten Toonder Award (1996) and the Cultural Relations Committee/ An Roinn Gnóthaí Eachtracha Award (1994). Seymour’s work is held in numerous public and private collections including the European Central Bank, the Office of Public Works, the University of Ulster, the National University of Ireland, Dublin City University and the Arts Council of Ireland.