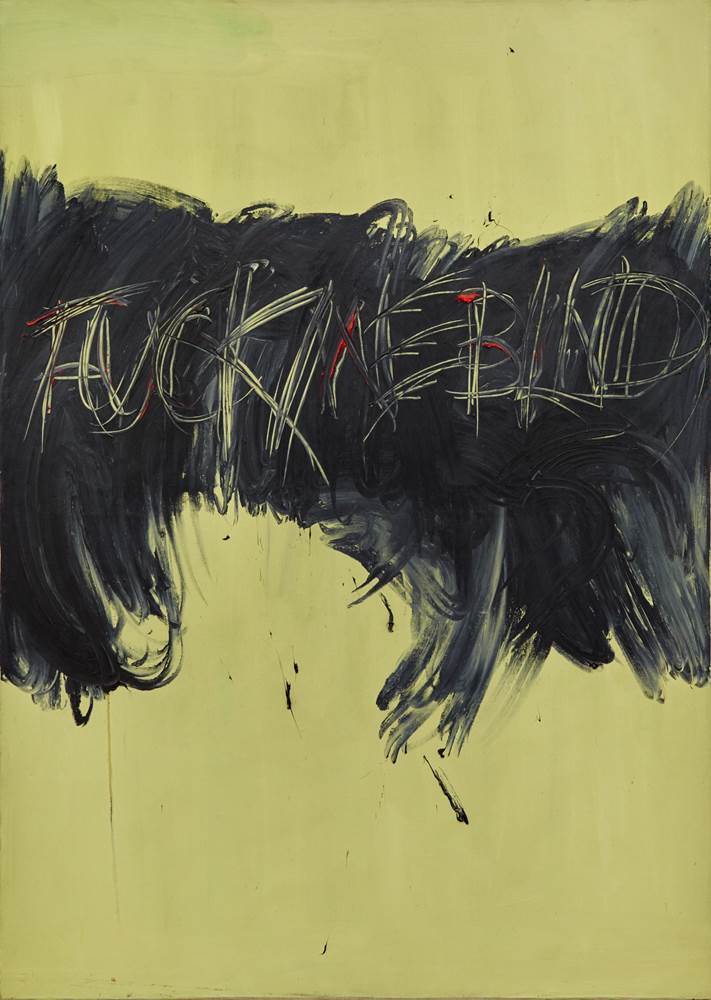 PROTEST! is a major retrospective of the work of acclaimed British artist and filmmaker Derek Jarman (1942-1994), marking 25 years since his death, presented at IMMA, in partnership with Manchester Art Gallery.

IMMA is delighted to present PROTEST!, a major retrospective of the work of one of the most influential figures in 20th century British culture, Derek Jarman. While addressing Jarman’s important contribution to film, this exhibition will focus on his wider practice as a painter, writer, set-designer, gardener and political activist. This is the first time that these diverse strands of his practice have been brought together in over 20 years, since the important exhibition at the Barbican, London, in 1996.

PROTEST! captures Jarman’s engagement with both art and society, as well as his contemporary concerns with political protest and personal freedoms arising from the AIDS crisis. Major bodies of work, from the 1960s to the 1990s, have been gathered together; many of which have never been seen in public before. The exhibition and accompanying catalogue will provide a comprehensive examination of Jarman’s work, with over 150 works in diverse media, dating from 1958 – 1993.

Derek Jarman studied at the Slade School of Art, London in the early 60s, and was part of a group of young painters, including Patrick Procter and David Hockney, who embodied a changing mood in British art. His early career focused entirely on painting, and from 1960 onwards he produced a variety of self-portraits and figure studies with diverse influences and constantly evolving outcomes. Often auto-biographical, his work across varied media reflected how his own life experience spoke to wider social and political contexts. Included in this exhibition are early paintings showing Jarman’s rapid stylistic evolution such as Self Portrait(1959), Trick (1964) and Landscape with Marble Mountain (1967). More than 80 early works have been identified from the period 1958 to 1970, and some 30 of these are previously unknown and have been catalogued, conserved and documented for this exhibition.

In 1967 Jarman was included in Tate Young Contemporaries; in the inaugural exhibition at the Lisson Gallery and the 5th Biennale des Jeunes, Paris; a remarkable record of achievement for a painter in his mid-twenties. Alongside painting he began to produce set designs for opera and ballet which fused his personal style of painting with the scale and three-dimensionality needed for the theatre. Sometimes called ‘The Andy Warhol of London’, as early as 1967 Jarman was hired to produce design sets such as Jazz Calendar by Frederick Ashton at the Royal Ballet; and in 1971 the set for Ken Russell’s The Devils. The exhibition includes many original designs by Jarman; photographs of the realised sets and a group of seven costumes designed by Oscar-winning costume designer Sandy Powell. While collaboration was at the heart of Jarman’s practice it also highlights his status as an incubator of young talent. Figures such as Tilda Swinton, Toyah Wilcox, Joanna Hogg, Sean Bean and John Maybury had their first opportunities under Jarman’s direction.

Throughout his career Jarman retained a deep interest in history and the art of the past. In 1976 he produced his first full length feature film Sebastiane, a queer telling of the story of the martyrdom of St Sebastian. Against the backdrop of Thatcherism and a socially conservative Britain, Jarman’s work made queer lives and history visible; a provocation to the dominant hierarchies. His films Sebastiane (1976) and Jubilee (1978) were broadcast on Channel 4 in the early 80s to a very broad audience. This led to a conservative backlash from figures such as Mary Whitehouse and Winston Churchill who appealed to the Arts Minister to have funding withdrawn. Jarman responded by becoming ever-more frank and un-apologetic about his subject matter, and from the late 80s, put queer lives at the centre of his practice through figures such as Caravaggio, Edward II and Wittgenstein.

Caravaggio’s life and art were a source of inspiration for their fusion of passion, beauty and violence. Over a period of more than ten years Jarman made paintings using techniques borrowed from the Renaissance master. Making a feature film on Caravaggio’s life became an obsession. This research led to the creation of volumes of sketchbooks, storyboards, and paintings which will be included in this retrospective. Following the release of the film Caravaggio in 1986, he received recognition by the Tate Gallery when he was included as a nominee for the Turner Prize that year.

At the end of 1986 Jarman was diagnosed as HIV-positive. AIDS was then a fatal, non-treatable disease which the tabloid press described as a plague. This diagnosis transformed Jarman’s practice and led to a new kind of activism as he worked to raise awareness of AIDS. He was one of the only public figures to ‘come out’ with the disease, an extraordinary act of courage in the social and political climate of the time. This is expressed in his paintings such as Queer (1992) [Manchester Art Gallery Collection], from his expansive series of ‘Slogan Paintings’. These monumental works, from the early 1990s, incorporating phrases related to government policy, tabloid hysteria and public fear of the AIDS crisis, are included in the exhibition and remain powerful comments on the socio-political climate of the time.

Jarman’s diagnosis coincided with a move to Prospect Cottage in Dungeness, Kent, which is over shadowed by the Dungeness nuclear power station. Here he created a unique and highly-regarded garden, the site of his film The Garden (1990) and book Derek Jarman’s Garden(1995). For this exhibition the garden will be the subject of new critical texts which will explore its lasting legacy and its place as a living work of art. The diverse bodies of works that were made there, tar paintings, landscape paintings, assemblages and feature film are represented in the exhibition.

Throughout his life Jarman was a committed diarist and regularly published memoirs that reflected his thoughts on art, life and society, these include Modern Nature (1991) and Dancing Ledge (1984). They offer a clear insight into his working process and the political backdrop to the creation of his work. This practice will be reflected in the exhibition through diaries, sketchbooks and spaces for reflection.

Moving image works from across Jarman’s career will be shown throughout the exhibition, charting the evolution of his filmmaking. Jarman’s achievement in film will be presented in association with the Irish Film Institute (IFI) who will screen a selection of his feature films in their original format during the month of December.

Jarman remains an essential and influential figure in contemporary art. Against the backdrop of Section 28, enacted on 24 May 1988 that stated that a local authority “shall not intentionally promote homosexuality or publish material with the intention of promoting homosexuality”, and the AIDS crisis, Jarman made explicitly political art. In his use of installation (including beds), multiple media and religious iconography he prefigured the work of younger artists including Tracey Emin and Damien Hirst.

PROTEST!, published by Thames and Hudson 2020

IMMA and Thames and Hudson will publish a major new monograph on Derek Jarman to accompany the retrospective, covering Jarman’s artistic development as well as reflecting on his life and legacy. The book will feature contributions from Seán Kissane, Curator, IMMA; Sir Norman Rosenthal; Jonny Bruce, gardener and journalist; Professor Robert Mills, University of London; Jon Savage, music critic and writer; Michael Charlesworth, an authority on landscape and the history of gardens and author of the book Derek Jarman, Critical Lives, and writers Olivia Laing and Philip Hoare.

Derek Jarman, PROTEST! is organized by IMMA, Dublin, in partnership with Manchester Art Gallery, and is accompanied by additional projects at VOID, Derry and John Hansard Gallery, Southampton.

The exhibition has been developed in close cooperation with the Keith Collins Will Trust, James Mackay and Amanda Wilkinson Gallery.

The Irish Film Institute will show a selection of Jarman’s feature films in their original format.

Focusing on Jarman’s Punk works including The Last of England and the GBH series, curated by Mary Cremin, Director, VOID.

HOME will present a film programme and series of events curated by Jason Wood and Rachel Hayward.

Focusing on Jarman’s Prospect Cottage landscape paintings and his relationship with nature.

Derek Jarman (1942-1994) was an English film director, stage designer, diarist, artist, gardener, political activist and author. He was educated at the University of London and at the Slade School of Art. In 1967 Jarman exhibited in Young Contemporaries, Tate Gallery, London (prizewinner); Edinburgh Open 100, Lisson Gallery, London and Fifth Biennale des Jeunes Artistes, Musée d’Art Moderne, Paris. Jarman’s first work in the cinema was as a set designer on Ken Russell’s The Devils (1971). Selected set designs include Savage Messiah (1972) and The Rake’s Progress (1982), along with numerous designs for stage and ballet. Jarman’s first moving image works were Super 8mm experimental films. His first full-length feature film Sebastiane was released in 1976, followed by, amongst others, Jubilee (1978), Angelic Conversation (1985), Caravaggio (1986), The Garden (1990) and Edward II (1991) and Blue (1993).

Jarman also wrote several books, including the autobiographical Dancing Ledge (1984), two volumes of memoirs, Modern Nature (1992) and At Your Own Risk (1992), and the poetry collection A Finger in the Fishes Mouth (1972). Derek Jarman’s Garden, which documents the creation of his extraordinary garden at Dungeness was published in 1995.

Join curator Seán Kissane and invited guests for a series of keynote responses that delve into the world of Derek Jarman. Jarman is considered by many as one of the most influential figures in 20th century British culture often described as a true ‘Renaissance man’, who combined a confrontational aesthetic with pure pop culture. Speakers share their diverse encounters spanning the life and work of Jarman, reflecting on his legacy as a renowned and revolutionary film director, stage designer, diarist, artist, gardener, political activist and author. The seminar is followed by the exhibition preview.

Join curator Benjamin Stafford for an insightful walkthrough of PROTEST! and hear about the key themes and artworks featured.

Manchester Art Gallery is the original useful museum, initiated in 1823 by artists, as an educational institution to ensure that the city and all its people grow with creativity, imagination, health and productivity. The gallery is free and open to all people as a place of civic thinking and public imagination. It promotes art as a means to achieve social change with its origins from the Royal Manchester Institution for the Promotion of Literature, Science and the Arts.  It has been at the centre of city life for nearly 200 years, and has been proudly part of Manchester City Council since 1882. The gallery is for and of the people of Manchester. Through its collections, displays and public programmes it works with all our constituents to ensure creativity, care and consideration infect all aspects of the way we live. This is an art school for everybody and for life.