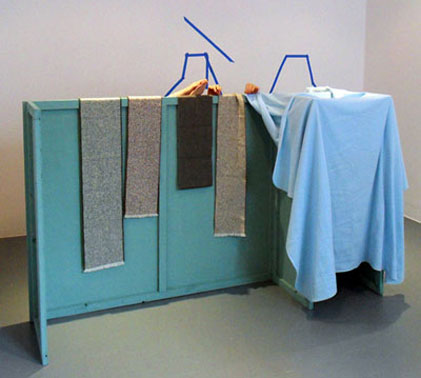 The Butler Gallery is currently presenting a suite of performances and the document of these performances by Irish artist Declan Rooney. Rooney grew up in Tullow, Co. Carlow but now lives and works in Berlin, Germany.

Declan Rooney works in various mediums including installation, video and live performance. He is interested in social gatherings, communities andgroups that are brought together and defined by commonalities and interests. In both his video and performance works, his stylized and expanded variations of ‘living pictures’ overlap and echo each other in complimentary and contrasting ways.

The exhibitionat the Butler Gallery has evolved from work undertaken by Declan Rooney with Kilkenny-based groups in the gallery over the period of the exhibition run. Rooney has spent time with these groups who have included skaters, musicians, artists, actors and volunteers, getting to know them and interacting creatively with them in a workshop-like environment, inside and outside of the gallery. This work has culminated in a performance with each of the groups in one of the four galleries of the Butler.

Urban Sports Kilkenny was the first group that Rooney worked with, the results of which were presented in both film footage and live routines in a performance on Saturday, June 12, between 1-5pm. For the second performance, Rooney worked with a small group of volunteers to develop a four-hour cyclical work fueled by an investigation into real and imagined forms of mysticism, occultism, modern witchcraft and ‘the eternal battle between the punks and the hippies’. Together, Rooney and the participants celebrated the approach of the Rose Moon at the Butler Gallery on Saturday the 26th of June between 1-5pm. The third performance involved a period of working with actors from KCAT’s (KiIkenny Collective for Arts Talent) Equinox Theatre Company in the Gallery to make a film that played in the Gallery while Declan performed. For the next and final performance in the Butler Gallery, Declan will work with a local band to create his final ‘living picture’ in the gallery space. Following this, film footage and artifacts from each of the performances will be on exhibit at the Gallery until Sunday the25th of July.

Declan Rooney studied Sculpture at the National College of Art in Dublin, and Performance Art/Raum Konzept at the Hochschule für Bildende Künste in Braunschweig, Germany. He has exhibited at the Crawford Gallery in Cork, the Fridericianum Kassel, PAC Milan, PS1 New York and at the Annet Gelink Gallery in Amsterdam. Rooney has participated in residencies at the Bluecoat Arts Centre as part of the Liverpool Biennale in 2004 and at CCA Kitakyushu in Japan. He also works as a project manager and curator, previously on such projects as ‘Intermedia’ at Triskel in Cork, ‘who is your friends? / the soap operas’ exhibition at Soap Gallery in Kokura Japan and ‘How Could You Be Angry While Grooming A Dog?’ at Galerie Perpetuel in Frankfurt. Rooney currently runs Berlin based ‘Kunstprojects’ and is a former Director of the ‘IPG’ (Independent Performance Group). Rooney is also a member of the performance groups The New Spastiks (with Herma Auguste Wittstock), The H*E*R*D Group (with Eunhye Hwang) and the band PPPKKKSSS.