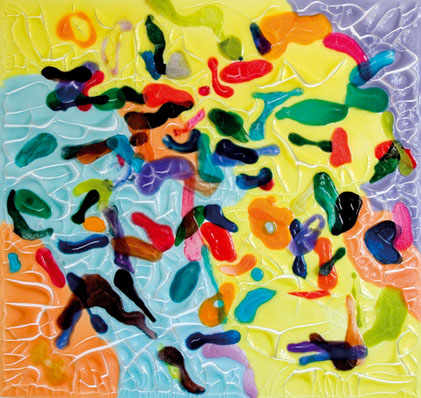 Declan O’Mahony was born in Cork in 1960 and studied at the Crawford School of Art before traveling abroad to immerse himself in international abstract art movements. He spent periods in Berlin, Adelaide, Naples, Hamburg, Madrid, Brussels, Leuven, London, Hawaii and New York before eventually returning home to live and work in Cork in 2000. During this international sojourn he exhibited widely and received a number of commissions. Works by him have been included in Royal Academy and Royal Hibernian Academy Annual Exhibitions as well as in the Iontas and Eigse Arts festivals. In 2010 he won a prestigious Competition to install a major work of art in the foyer of the new North South Secretariat Building in Armagh City. This large diptych painting is due for completion and installation in June 2011.

While traveling in America he became inspired by the Colour Field artists Helen Frankenthaler, Morris Louis and Jules Olitsky whose work of the 1950’s & 60’s greatly impressed him. They developed a style of painting characterized primarily by large fields of flat, solid color spread across or stained into the canvas. Declan’s paintings are highly coloured abstracts, cosmic myriads of mutiple hues, seething with beauty and energy. His works are made instinctively and freely. Making his own Polymer paints, he creates intricate symphonies of colour best described as lyrical abstraction.

He states that “Looking at the minutest detail in the real world stimulates my imaginative sensors. These images compact in my visual memory. There is no literal translation onto the canvas. Only an impulse to create and uncover through the magic of the medium paint the magic in the world of colour , form, shape, texture and surface.”

It is this fascination, this magnetic sensation between the primed stretched empty canvas and the activity of hand, eye and mind, freely improvising with colour and form that remains the chief driving force of his work. This will be his first solo show in Dublin and will include examples of his work spanning the last 15 years.