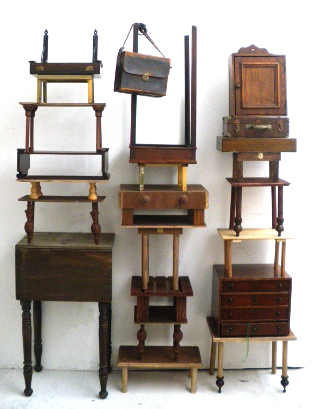 The artists were invited to explore the idea of Freud’s Death Drive within their practices. Freud’s theory claimed that each person has a drive towards becoming an inorganic state; it is what pushes us into reimagining and re-enacting traumas; either literally or through our relationships with other people and places throughout our lifetimes. For this exhibition, Donoso Lopez, Le Cain, Jacobsen and McGibbon were specifically asked to consider the actions of repetition and re-enactment as forms of dealing with trauma and traumatic memories. This connects to the Psychoanalyst Melanie Klein’s theory on the Death Drive in children, with her focus concentrating on the recurring patterns that emerge through play and on the underpinning anxieties that this indicates.

Each artist in this exhibition investigates the presence of the human and its relation to site and /or personal experience, and how experience, memory and distortion affect the self. This distortion and anxiety leads to an element of the grotesque, particularly in McGibbon’s work. Melanie Klein’s theory that Death Drive anxieties manifest in aggression is explored indirectly, and is often an aggression turned inward in the form of glitches and repetition, as seen in Donoso López and Le Cain’s works. Death Drive is an exploration of reenactment vs. remembering. Stine Marie Jacobsen’s text work follows this reenactment vs. remembering line of enquiry, regarding the conflict between memory and the cinematic. Jacobsen’s current practice humourously takes on the most serious and dark issues of the human psyche, using mediums such as video, performance, photography, drawing, writing and curating. Key themes in her work are cinema, death and violence, gender, anonymity, as well as their portrayal and presentation in film and reality. Her text discusses the perceived notion of memory being like a cinematic narrative and how this has been disproven. It also uses the metaphor of a true story of a photograph being taken with an 8 hour exposure, and the protection that is needed when being ‘exposed’ for this amount of time.

Klein’s observation of children’s play led her to see their preoccupation with what went on inside themselves and their experience of the people in their world. ‘Internal object’ is a term used commonly in Kleinian theory to denote an inner mental and emotional image of an external figure, also known as an external object, together with the experience of that figure. The inner world is seen to be populated with internal objects. This theory of perception can be linked in to each artist’s works; their individual explorations of taboo and self culminate in an exhibition that invites the viewer to consider their own perceptions of self. These ‘Internal Objects’ have been made external by the artists in Death Drive. Vanessa Donoso López’ work uses the process of children’s play and experimentation as a starting position for her work. Says the Spansish born, Dublin based artist of her work; “I live struggling with language and cultural barriers, purposefully removed and often -almost- isolated. To get over this apparently self imposed trauma, I create, in a repetitive way, transitional objects and explore concepts of transitional phenomena.” Aswell as an interest in Melanie Klein, Donoso Lopez also draws on psychoanalyst Donald Winnicott’s theory based on a phenomenon commonly observed: early adoption and fierce possession by children of an object. According to his theory, this object occupies a space between what he calls “inner psychic reality” and “external reality” of the child. Over time, the object’s importance declines and gradually loses it’s meaning for the child. Still, Winnicott argues, what it represents remains and stays unconsciously present in every one of us.

Speaking of his process in relation to this exhibition, Cork based film maker Maximilian Le Cain states; “Most of my editing work is done at night. These works I make are nocturnal. My culture is cinema, including experimental film. There is cinema and what is called ‘reality’. There is the body, mine in this instance, and then there is the night. There are limits, failures and overwhelming sensations. Sound, image, silence: oblivion. It is at the obscure intersection of all these that I jot down my audio-visual sketches… Imagine a cinema possessed by the aesthetics of interruption. A cinema that makes space stutter, light gaseous and time circular. This aesthetics of interruption functions as a vehicle or catalyst for externalizing pulses, anxieties, desires.”

Galway based artist Siobhán McGibbon is currently investigating what she calls ‘The future of Normal’. She has a keen interest in the diagnosis and treatment of perceived abnormalities. This research is contextualized by narratives of real people, such as Jose Mestre, a man with an 11lb haemangioma tumour on his face and Ronnie and Donnie Galyon, the world’s oldest conjoined twins.

Death Drive runs from September 6th to October 5th in Galway Arts Centre, 47 Dominick Street, Galway. More information on each artist can be found on: