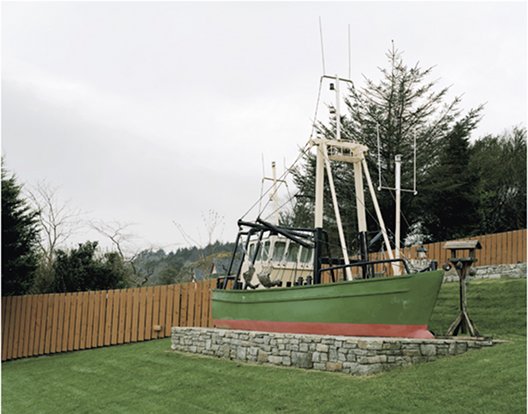 “I have wanted to create a melancholy in the work, reflecting on absence and decline without showing these in an obvious form…”

This body of work, produced over the course of a six-month artist residency at the National Fisheries College in Greencastle, examines the contradictions and complexities of sustaining the future of a fishing industry that has been at the heart of a community for generations.

The work builds on a foundation that saw the artist train alongside trainee deckhands for over a term at the National Fisheries College. This foundation generated the kind of significant conversations within a community – in this case, a community of trainee, present and former fishermen, and those in the area of the village of Greencastle associated with the industry – that only open up within the sustained commitment of a Residency project. In particular, there were for the artist very formative and significant

discussions centered on the sense of waste and fury around the practice of ‘Discards/Bycatch’ imposed upon the fishing industry and the nuanced consideration of concepts such as ‘limited resources’ and ‘ sustainability’.

Rather than a simple case of a guilt, anger and simple remedy, the issues grew vastly more complex. From such considerations there has developed a body of work with almost a sense of melancholy or lament present, which functions as a reflection on absence and decline.

The project builds on the programme of rural Artist Residencies contexts that Artlink has been developing in County Donegal. This project has been supported the Arts Council Artist in the Community Award managed by Create and would not have been possible without the support of the National Fisheries College, Greencastle and the broader community of the fishing industry in Greencastle.

The works will be presented at Fort Dunree as part of the Earagail Festival 2012 with an associated closing project at Greencastle Regatta 2012.

The project will close with an exhibition in Greencastle during the unique setting of Greencastle Regatta 2012 9-12 August: a series of portraits and landscapes taken by the artist whilst on the BIM trainee’s trawler which will elude to the larger project.

David Farquhar is a 2010 graduate in Photography at University of Ulster where he studied under Paul Seawright. His work was selected for purchase during 2010 for the Arts Council of Northern Ireland collection and in 2011 with Artlink he received an Arts Council Artist in the Community Award managed by Create, Ireland’s national development agency for the collaborative arts.

In 2010 the artist completed the work Fatigue Detail as a response to an interest in the exploration of personal and human limits, and the view that the military may be a professional platform where this can occur. The work involved photographing soldiers from the British Army’s 2nd Battalion ‘The Rifles’ in the immediate aftermath of physical training exercises, in Northern Ireland, England, and in Kenya. The work documented the inherently ‘real’ physical reaction of the body to a simulated reality, as well as questioning the extent to which military training exercise can prepare for operational reality.

The David Farquhar project Discard is in some senses an extension of this previous photographic research and exploration of the subject of endurance – the exploration of personal and human limits: in this instance, within the context of the lives of the rural communities of Inishowen.