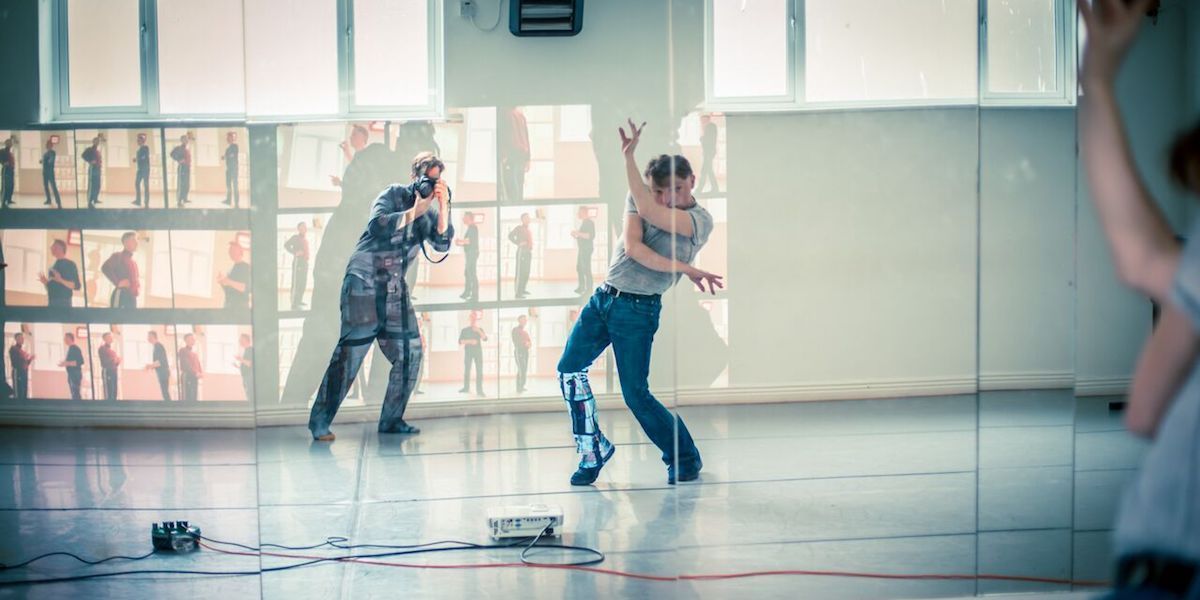 Is it possible to choreograph a work based entirely on body language, being true to the spontaneous nature of our physical behaviour? For Body Language, CoisCéim Dance Theatre’s Artistic Director, David Bolger set himself a task with this question.

“It is said that over 65% of all our communication is non-verbal, made up of our gestures, posture, how we sound, how we look. As a choreographer I am naturally inquisitive about body language. The tells and clues that are sent out from our limbic system (the emotional brain) are unplanned, natural, honest. They make up our everyday kinetic conversations, which are naturally organised but not pre-planned.

Choreography is dance-writing. A choreographer is someone who organises and designs sequences of movement patterns and creates choreography by writing with the body.

The Body Language project is an exploration and interrogation of non-verbal communication in the digital, aural and physical realms. It is a process.

With choreography, video/photography by artist Christopher Ash, music by Composer Michael Fleming, and dance artists Justine Cooper, Jonathan Mitchell, Ivonne Kalter, Emma O’Kane and Jack Webb, it is a process of detection and consists of three unique cycles made up of Daily, Weekly, and Residual Practices:

Daily practice will include an interview of a member of the public – from anesthesiologists to zookeepers – diverse subjects will be recorded and photographed. Nuance, detail, subtle themes and contrasts picked up by the camera will be explored and studied in order to construct a new piece of art work. Their physical narratives will be deconstructed to inform new choreography created each afternoon.

Weekly practice will culminate each Sunday in a choreographic response to the daily interviews: a performance of new choreography and composition featuring the full cast of dancers with music and projection. Each week will see new developments diversify and grow into an entire cycle of new dance, film, photography and music culminating in a presentation on Sunday 3 December.

Residual: After the company have physically left the gallery a residual of the work will be projected and presented together with items of discovery, notes and sketches documenting the entire project from start to finish.

This open, durational performance at the RHA Gallery is the culmination of 4 years of development by one of Ireland’s leading dance companies. Under the artistic direction of David Bolger, for over 20 years CoisCéim has presented award-winning work to audiences large and small, onstage and on film throughout Ireland and overseas. With a contemporary and vibrant style and a knowing regard for the everyday, CoisCéim articulates stories and emotions that are relevant to the landscapes in which we live.

David Bolger is the Artistic Director and co-founder of CoisCéim Dance Theatre. His work has been seen by millions of people worldwide and has received prestigious awards for its innovation, performance and choreography. Over the last two decades, David has directed and choreographed over 20 original productions for CoisCéim, including the acclaimed Swimming with My Mother, Missing, Agnes and The Wolf and Peter, a work for children and families, which became the first work by an Irish dance company to be staged at the iconic Sydney Opera House in July 2017.

In 2016, he co-directed two major co-productions; Invitation to A Journey and the Irish Times Theatre Award winning These Rooms for the Arts Council of Ireland’s ART2016 programme. His work for film includes the multi award-winning Hit and Run, CoisCéim/Saffron Pictures, Deep End Dance, Wildfire Films and Falling Out of Standing, CoisCéim/ANU. David has received numerous choreographic commissions for theatre and opera worldwide, recently co-directing Midsummer with Joe Dowling for the Guthrie Theatre, Minneapolis and as Director (Movement) on the multi-award winning Druidshakespeare.

Christopher Ash is an international designer and photographer working primarily in the theatre for nearly two decades. A Philadelphia resident, he was born in New Haven, and raised in Buffalo. He cut his teeth as a designer in Chicago and Los Angeles and then returned to New Haven to complete his master’s degree in scenic design from the Yale School of Drama. His scenic; lighting; and projection design work in opera; theatre; and dance have been presented in a dozen countries in a variety of venues ranging from Broadway to five thousand seat arenas to store fronts. His designs have received several awards and nominations. David Bolger and Christopher met while working on A Midsummers Nights Dream, Guthrie Theatre where David was the co-director and choreographer; and Christopher was projection designer. Following Midsummer, David invited Christopher to team up with him to develop Body Language. For the past two years, they have been workshopping and developing this unique installation.  www.christopherash.com