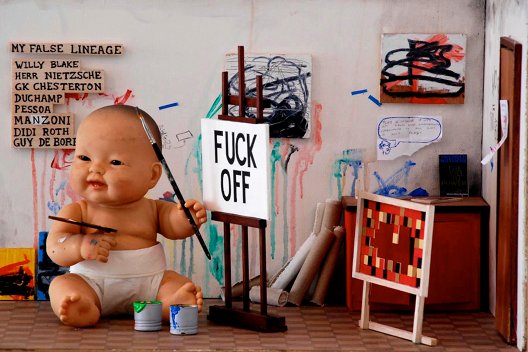 ‘We represent nothing and as such have the latent potential to become anything’’
Anon, Of Nonceptuality, p 4, 1983

‘In every respect, Nonceptuality is a transgression. It puts law into question, it
denounces its nominal or general character in favour of a more profound and more artistic reality’.
Anon, Of Nonceptuality, p 37, 1983

Darren Barrett presents Artlessness: The Cultural Logic of Nonceptuality, an exhibition which strives to transmit something of the playful vitality of the artistic collective known as the Nonceptualists. The exhibition is comprised of a series of two and three dimensional works attributed to this clandestine group.

The Nonceptualist collective itself is composed of a geographically decentralised network of artists and theorists from a multitude of different nationalities. It has been in existence in one form or another for well over twenty years. During this span of time, it has produced a complex and expansive body of work and critical writings, deliberately eschewing the prevalent stylistic conventions dominant within the contemporary visual arts. The group has chosen to preserve its anonymity in order for its members to retain as much creative autonomy in their practices as possible and to prevent the transgressive spirit of the collective from becoming assimilated into the economic hegemony currently driving the art world.

Rejecting the lethargy and ennui of the mainstream artworld, precipitated by its rampant commercialisation, the central objective of Nonceptuality is to create an alternative environment where a proliferation of different styles and working methodologies can breath and cohabit, allowing visual and theoretical sources to be twisted, distorted and manipulated in a continuous process of aesthetic evolution and overcoming.

Darren Barrett is an artist currently based in Dublin. He graduated from the National College of Art and Design in 2007 with a BA in Fine Art (specialising in painting). He has had solo exhibitions in the Joy Gallery in Dublin (2009) and Basement Project Space in Cork (2011) and has also participated in numerous group shows throughout the country. His practice examines the issue of how we apprehend and evaluate the visual arts within the present age. His work operates within a metaphysical crevice situated somewhere between theory and practice The contemporary of a plethora of confident young emerging Irish artists, Barrett characterises his own artistic and intellectual position as that of a diverging artist and is currently living through what he describes ‘as the intermittently glorious years of onanistic solitude’.