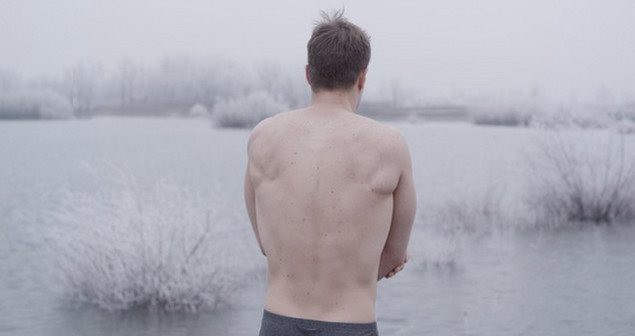 This exhibition, ‘Studies on Shivering’, represents part of a wider project by the artist Damir Očko (HR). In this project, the artist creates a dialogue between film, poetry, musical scores, objects and drawing to explore a central theme; the shivering body as a metaphor for resistance and unrest. The title of the film in this exhibition, ‘TK’, comes from the phonetic description of the sound of teeth or stones clashing together. These types of sounds create a visceral, psycho-acoustic response in the listener and the effect is one of Očko’s central concerns.

The main element of the exhibition at Temple Bar Gallery + Studios will be comprised of an installation of the film work ‘TK’ (2014). In this film, the central protagonists stand unclothed in a frozen winter landscape, willing themselves to be still in the face of the incontrollable and involuntary bodily function of shivering. This rhythm is mirrored in edited intercuts in the film between this scene and shots of the trembling hand of a man suffering from Parkinsons disease as he struggles to transpose the words of a poem written by Očko. Throughout we can hear the voice of the narrator, reciting the poetry which forms the ‘score’ of the film.

‘Studies on Shivering’ combines elements such as scores, collages, architectural intervention and collaborations to extend the normal cinematic space and to create a hybrid work in which film, research and poetry are equally weighted.

Očko completed a residency at Temple Bar Gallery + Studios in 2011. During this time he made his earlier film work ‘We saw nothing but the uniform blue of the sky’ this work took stuttering – a speaking disorder – as its central point, and in this way it directly relates to ‘TK’, which extends the artists interest in bodily, muscular activity and breakdown as a political language.

‘Studies on Shivering’: Exhibition walk through with Damir Očko

Damir Očko will be in conversation with Curator Rayne Booth on Friday 21 November at 3pm at Temple Bar Gallery + Studios. This public event will be an opportunity to hear the artist talk about his current exhibition ‘Studies on Shivering’ at TBG+S, and the multi-disciplinary aspects of his practice, composition, drawing, poetry and film making.