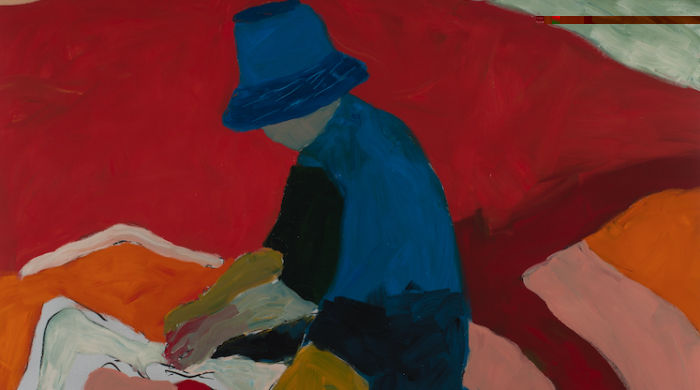 The RHA Gallery is delighted to present a series of works by Sean Scully, one of today’s leading practitioners of abstraction. His compositions are mostly built of plain strips and bands whose balance derives solely from intuition and not from rational construction.

This series, being showed in Ireland for the first time and named after the island resort of Eleuthera in the Caribbean, stands out for its surprising figuration, which seems to represent Scully’s radical break with an artistic approach he has consistently pursued since the 1970s. But in fact, Scully worked simultaneously and independently on both the figurative pictures of his eight-year-old son Oisín and his abstract geometric paintings. Products based on either one of these two forms of expression were created virtually side by side, in the same studio: on the one hand, the many variations of a picture composed of vertical and horizontal strips and beams, with which Scully experimentally explores the fragile relationship between load-bearing and resting elements, between states of floating and being supported, in all its formal and coloristic possibilities; and, on the other hand, Scully’s series Eleuthera as contemporary interpretation of a child’s portrait in the mode of concrete and figurative painting.

So this baffling duality in Scully’s oeuvre is not rooted in a disruptive stylistic development but in the artist’s response to the bliss in this boy’s straightforward world. Today Scully uses two modes of expression in his painting: the figurative approach he relies on for the pictures of his son is linked to issues regarding the artist’s identity as a father and observer, whereas the painter continues his investigation into the universal and existentially understood forces of horizontality and verticality.

The apparent stylistic rupture is therefore indebted to the motif as such: the intimate subject of the artist’s contemplation. It is his second son, born late in the artist’s life, whom Scully observed playing on the beach for hours and days on end, years after the tragic fatal accident of his first child. The boy is evidently a motif Scully could by no means have approached with his geometric compositional principles, his signature style, without violating the intimate family bliss. This new “realism” is certainly no return to the artist’s concrete beginnings under the impact of German Expressionism. Scully had soon left behind the realism of his years at the art academy. But even with his most abstract paintings he still displays moods and impressions he remembered or things he experienced. Many objects are first captured in the form of photographs and then undergo thorough transformation in the form of orthogonal beams and strips.

The most important point of reference for Scully’s most recent series is the work of Henri Matisse. Similar to the Frenchman, Scully uses color in a way that is detached from the example of nature; he is not enslaved to visual perception. He suggests heat with the aid of color and chromatic temperature instead of modeling it with light and shade.

Scully shows his son sitting on the beach, erecting an embankment around himself in the form of a moat. The child is protected from the strong Caribbean sunlight by a T-shirt and hat or by a towel tied to create a turban. Scully has painted with a broad brush on aluminum, a support that does not absorb the paint, which stands out visibly on the surface of the picture. In the studio he has abstracted the original motif—his son, immersed in his serious play—by removing all fleeting detail. Scully does not paint in front of the motif, for he is not an Impressionist or naturalist. Oisín is recognizably surrounded by water, toys, and sand, but nevertheless everything in the picture follows a law of abstraction by which the unique sense of this idyll can be captured all the more deeply. For all that has been said, Eleuthera is thus one of the most significant artistic manifestations of the genre of “children’s portraiture.”

Sean Scully was born in Dublin in 1945 and grew up in a working-class district in London. While trained as a typesetter, he worked as a courier and graphic designer. To come closer to his dream of becoming an artist, he attended evening classes and was finally admitted to an art academy as a student. Initially choosing a figurative approach, he soon embraced abstraction and geometric art under the impact of Abstract Expressionism, particularly that of Mark Rothko. Inspired by Minimalism, he reduced his palette and limited himself to simple forms. He used masking tape like Ellsworth Kelly and other hard-edge artists in order to clearly delineate his strips of color: Scully’s early work is characterized by radically flat and strictly geometric compositions featuring sharp outlines. His first exhibition in 1973 already turned out a success; today his works are conserved in all prominent collections around the globe; major exhibitions have been held in important museums in Europe, the USA, and Asia.

In the 1980s, Scully began to add some color to his dark, almost monochrome painting. His compositions became more spatial, although they never displayed any illusionism. Sean Scully took to drawing his strips freehand, virtually spreading the paint, which was now reminiscent of soft paste. The lines between his strips of color became more fluid and blurred.

In 1983, Scully’s nineteen-year-old son Paul died in a car accident in London: a blow of fate that would pervade Scully’s dark pictures with a feeling of melancholy and loss. Scully’s paintings became heavy, sculptural objects that could have stood on the floor instead of hanging on the wall.

His international fame ensured that Scully taught at various art academies: between 2002 and 2007 he also worked at the Academy of Fine Arts in Munich, where he met the painter Liliane Tomasko. They married in 2006. In 2009 their son Oisín was born. Scully planned to interrupt his career to devote himself solely to the boy. However, a period of intense and explosive artistic productivity began. Although Scully has always held on to his approach of minimalism and geometric abstraction in his painting and sculpture, he resorts to figuration in the company of his son, so as to be able to artistically express his feelings for Oisín and Liliane with deepest empathy: the intimacy of the subject has practically urged Scully to resort to another—a novel—mode of representation without a general stylistic change taking place in the rest of his oeuvre.