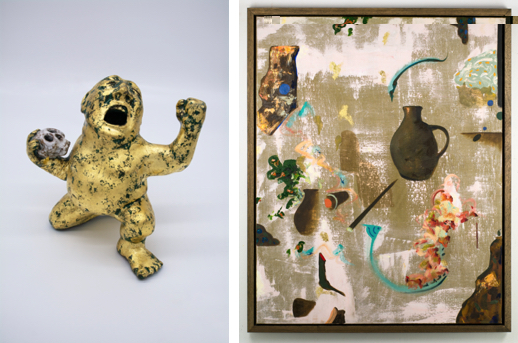 Tilt brings together a new body of work by Damien Flood, that juxtaposes paintings with a series of new ceramic works, showing in the RHA Brown and O’hUiginn Galleries.

“In 2014 I successfully applied for an Arts Council grant to provide time and space to explore and develop a new sculptural element to my painting practice. What resulted was a series of failed and embarrassing attempts at sculpture and ceramic works. These failures were wisely shelved, and the forthcoming exhibitions consisted solely of my paintings. Throughout the following years, the desire remained to expand my practice but with exhibition deadlines, the time was never there.

In mid-2018, I felt the need to slow my painting down, give time and space to each work and finally came back to the aborted sculptural ideas. Within my painting, ideas had surfaced that could no longer be contained on the canvas without fear of derailing the work. These new sculptural ideas were clearer and more focused than before.  I wanted to activate the exhibition space, expand the themes within my work and challenge the reading of my paintings.” Damien Flood, Feb 2021.

Flood then embarked on a two-year span of research and making, for this exhibition Tilt. The exhibition sets new ceramic work alongside a series of new paintings. The ceramics sit upon handmade brass, cement, and steel stands, evoking delicate and industrial aesthetics. The cracking white Grinners stare dead-eyed into the space presenting their 22-carat gold teeth in a humorous grin, celebrating and embracing our inevitable ending. They evoke notions of long-lost Aztec artifacts and simultaneously limited-edition collectables from a local comic shop. Alongside these sit a series of Crying Men on their concrete plinths, bathed in flaking gold lamenting the futility of desire. They speak of our need to collect and own and its failing connection to being remembered.

The heavily layered and sumptuous paintings fold together disparate elements that Flood has developed over the last 14 years. They are combined to create lush complex works that evoke spaces that flip between internal and external, macro, and micro. Flowers grown from paint feature heavily throughout the exhibition. The large paintings depict places in a permanent state of becoming, places to be inhabited by the viewer. The smaller works depict ethereal gardens or singular plants, recognisable moments in an ever-shifting landscape. A series of vases merge the ceramics with the canvases through their painted surfaces, balancing on thin rusted metal stands, contrasting their beauty and skewing the exhibition space.

The ceramic works pull on the tension exploiting the transition from the real world to the fragmented world of imagination and memory and the tension between a figurative and abstract language. The series of Crying Men and Grinners tug, with dark humour, at chords of association with primitive cultures and pagan offerings while juxtaposing the emotional landscape of the paintings.

The exhibition is curated by RHA Director, Patrick T Murphy and will be accompanied by a fully illustrated catalogue containing essays by James Merrigan and Sue Rainsford.

This exhibition is kindly supported by The Arts Council / An Chomhairle Ealaíon and Wicklow County Council.

Damien Flood, b. 1979, is an Irish artist based in Dublin. His work is grounded in early writings on philosophy, theology, alchemy and the natural sciences and explores the mutability of reality and language.

He has been selected for the John Moores Contemporary Painting Prize in 2008 and 2010. In 2014 he was the recipient of the Elizabeth Fitzpatrick Travel Bursary administered by the RHA and in 2015 was awarded the DLR Lexicon 2016 Commission. In 2017 Flood was awarded the Eigse Hotron Award.