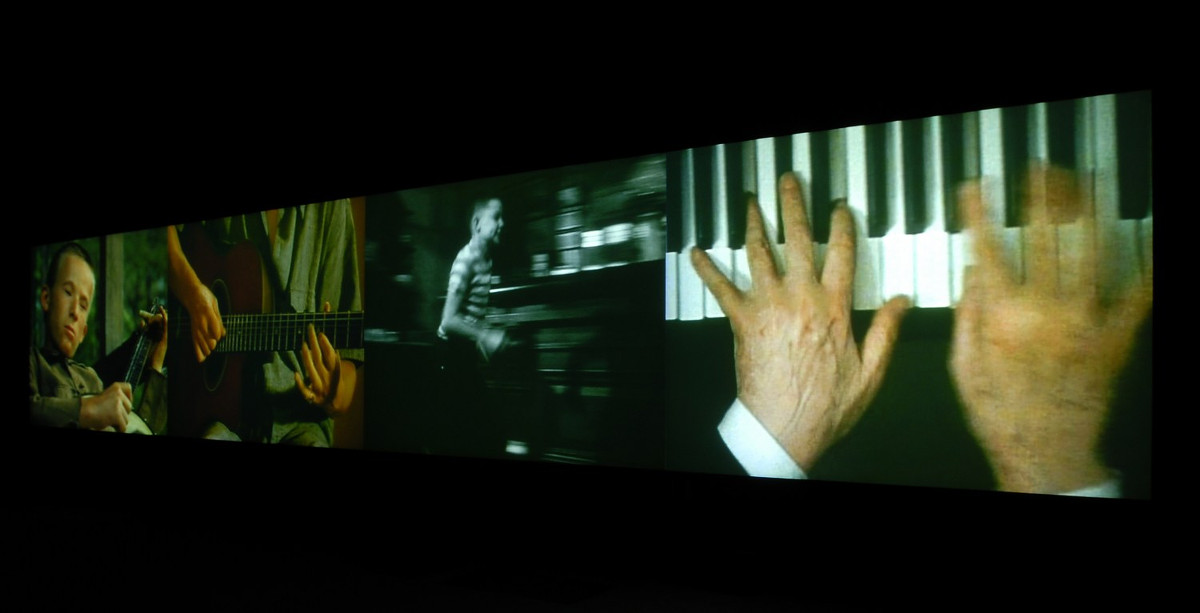 The Golden Thread Gallery is delighted to present Christian Marclay’s critically acclaimed Video Quartet (2001) on loan from the Tate, London until the 7th January 2017

“Video Quartet is a four-screen DVD projection synchronizing hundreds of Hollywood film excerpts that feature actors and musicians playing instruments or making sound. Compelling both visually and acoustically, the piece is “a mixture of laptop multimedia collage and more conventional acts of cinematic and musical arranging that shows Marclay at the peak of his powers…” (Artforum).

In 2003 ‘Video Quartet’ became the first work by Marclay to be acquired by the Tate, London.

Further information about this work can be found on the Tate website: http://www.tate.org.uk/art/artworks/marclay-video-quartet-t11818/text-summary

“One of the most remarkable developments in the Caribbean and its diaspora over the past two decades or so is the emergence of a generation of young visual artists working in various media (paint, film, performance) who have been transforming Caribbean visual practice, perhaps even Caribbean visual culture.

Importantly these younger artists did not grow up in the “aftermaths of sovereignty” so much as in the aftermaths of sovereignty’s aftermaths. They grow up in a context in which the great narratives of sovereignty, once oppositional, once open to the adventure of a future-to-come, have congealed and ossified, and in doing so disclose more and more their own modes of exclusion, marginalization, repression, and intolerance. And as the old anti-systemic movements for social and political change became installed in power in the new states of the region they stultified into new modes of orthodoxy, into their own terrified normativities, anxiously policing the boundaries of identity and community, the expressions of personhood and belonging, of sex and pleasure.

These are precisely themes that preoccupy this younger generation, and that provoke and illuminate the domain we call Caribbean queer visuality”.

Golden Thread Gallery’s artistic vision is engaged with the fluidity of history and the multiplicity of points of view. The programme investigates how moments in time can have an irrevocable impact on perspective. Our surroundings shape how we read meaning: an event can be something or nothing depending on where it occurs or what we have previously experienced.