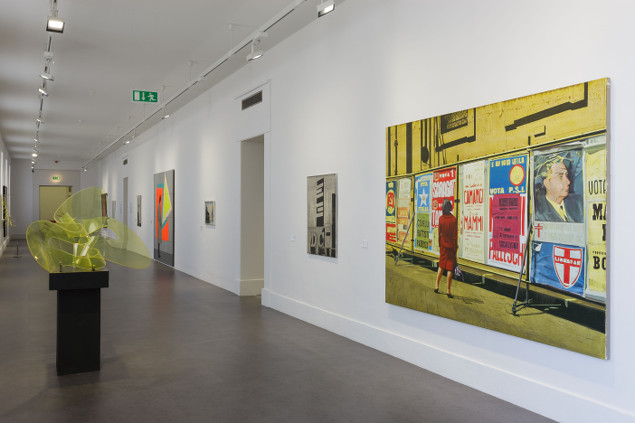 Conversations is a selection of diverse displays from the IMMA Collection that present the idea of dialogue on a number of levels: among particular artists’ practices such as Andrew Vickery and Elinor Wiltshire; between ‘then’ and ‘now’ in artists’ work at different times in their career, as with Paul Winstanley and Mark O’Kelly; and works that encourage exchange between the Collection, artists, their work and the viewer.

Certain rooms focus on individual commemorative works such as the The Great Wallenda (Cabinet Version), 1997-98 by João Penalva, and Sean Scully’s Dorothy, 2003, in memory of Dorothy Walker.

Also exhibited is a selection of works co-curated by artist Caroline McCarthy, shown with works from McCarthy’s own studio including Group Coordination (Red), 2011, which she has reconfigured in response to the gallery architecture.

Another strand of programming focuses on specific moments, events and individuals in the story of cultural production in Ireland, namely the contribution of David Hendriks to the development of art in Ireland during the 1960s and 70s, and the commitment and enthusiasm of George and Maura McClelland as collectors and promoters of Irish art.

A selection of works by Brian Maguire, Guggi, Mary A. Kelly and Barrie Cooke exemplify how certain works are acquired for the IMMA Collection. Barrie Cooke’s Bone Boxes,dating from the 1970s, and two more recent paintings, pay tribute to his recent passing.