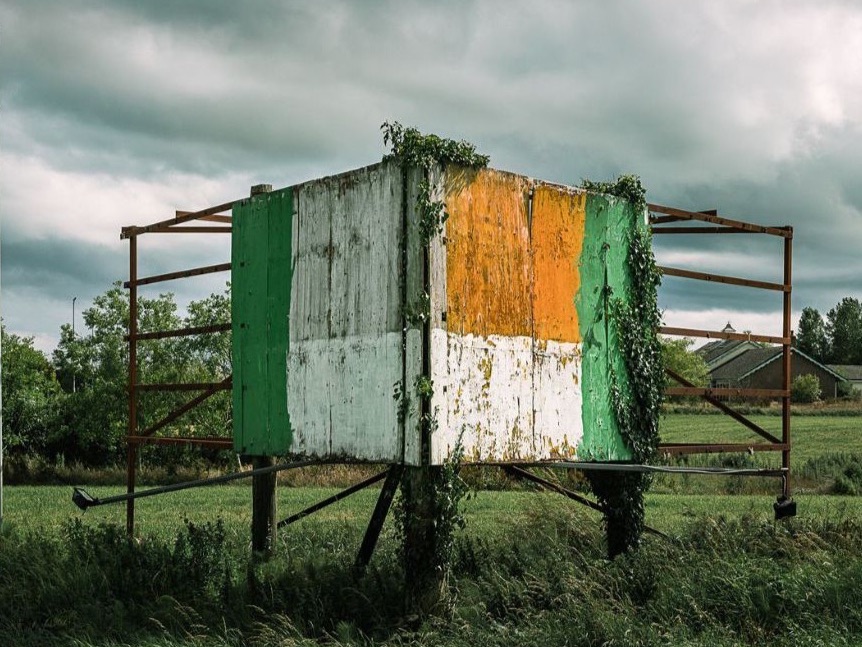 Acclaimed photographer and filmmaker, Conor Horgan began working on Post-State in 2020 as he travelled around Ireland, building a series of relevant images that articulate how he imagines the island might look if it were to no longer exist as a nation state.

The works in this exhibition are intended to be read as a series of glimpses into the future, showing what’s left behind in a post-state Ireland. It marks a new departure for the artist, in terms of subject matter and photographic approach.  The series of landscapes on display in this exhibition explores the impact of humankind on the natural world, highlighting the arbitrary and exclusionary nature of nationhood.

It invites the viewer to question aspects of human behaviour and constructed tribalistic identities that are now untenable in the face of inevitable ecological crisis, which recognises no borders. Horgan’s Flag images acknowledge the complexities of Anthropocene existence.

Rooted as they are in an all-too-real climate of rising temperatures and political extremism, these images examine the now faltering foundations upon which civilisation precariously balances. The landscape, unpeopled, appears to be the sole survivor; post-capitalist, post-breakdown, post-state.

Conor Horgan is a celebrated photographer, writer and filmmaker. After an artist’s residency in the Centre Culturel Irlandais in Paris in 2017 he moved to the city for two years to fully experience the breadth of its photographic culture. Since returning to Ireland, and throughout the Covid-19 lockdowns, he has adopted new approaches to his visual arts practice and has moved into entirely new areas of subject matter, mainly landscape and still life.

This new departure has been well-received and resulted in the support of Arts Council with the Agility Award in 2021 and being selected for several major exhibitions in 2022, including PROTEST! at the Gallery of Photography, the 192 RHA annual, RUA Annual, and two group shows in the annual Photo Ireland festival.