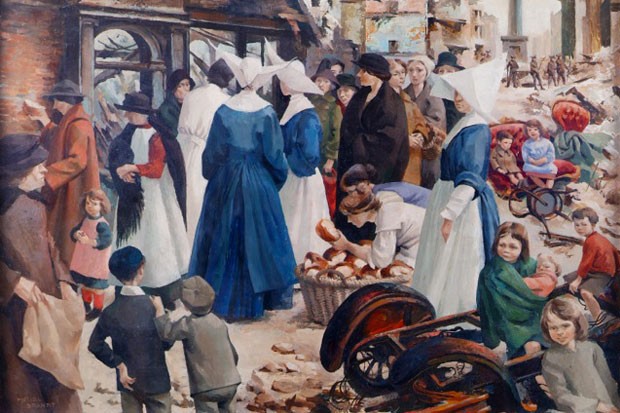 Crawford Art Gallery, Cork is delighted to present the exhibition, Conflicting Visions in a Turbulent Age 1900-1916, curated by Dr Éimear O’Connor HRHA in collaboration with the gallery.

Conflicting Visions in a Turbulent Age 1900-1916 is an exciting exhibition featuring several themes that influenced the era, some local to Cork and others more nationally or internationally focused. Highlights include a portrait by John Butler Yeats – which has never been publically displayed, three portraits by Dermod O’Brien that have not been seen in public in over one hundred years, personal material belonging to Terence MacSwiney, a new sculpture by Rowan Gillespie, an exquisite woodcut by Lady Gregory, and a bible with a poignant connection to the same Lady Gregory

The exhibition will feature paintings, drawings, posters, film and artefacts pertaining to, for example, the Cork International 1902-3, the First World War, the connection between Sir Hugh Lane and the Abbey Theatre, and the Easter Rising, along with evidence of the then contemporary artistic engagement with New York, and with Parisian Modernism. There is the crash and bang of war in a series of films, and yet, in a quiet section of the gallery, there is artwork from the Honan Chapel, University College Cork, consecrated in November 1916.

Personalities emerge in various ways: George Russell, May Guinness, Sir Horace Plunkett, John Butler Yeats, Beatrice Gubbins, and Robert Gregory, to name but a few. Present-day artwork by Robert Ballagh, Orla de Brí, Margaret Irwin West, Margaret Corcoran and Mick O’Dea embody the recent artistic response to 1916 and the centenary of commemoration in general, while another piece, painted in 1966, represents the then response to an official call to commemorate the fiftieth anniversary of the Easter Rising. The show also includes The People’s Exhibition, a digitized display containing images of historical items belonging to the people of Cork and, with permission from the owners, some of that material is included within the exhibition itself. Within the exhibition there are many complex, complicated, and conflicting visions that combine towards synthesis, and yet disrupt preconceived perceptions.

The exhibition will also include a public gathering entitled ‘A Heart That is Free’: Terence MacSwiney in Context (Friday, 17 June). Featuring excerpts from MacSwiney’s 1914 play, The Revolutionist, this engaging and accessible event is free to the public and is an exciting way to celebrate the writer’s cultural legacy.

Public Symposium  ‘A Heart That is Free’: Terence MacSwiney in Context

Celebrating Terence MacSwiney’s creativity and the context in which he worked, this event, Friday 17 June (11 am-4:30pm) featuring excerpts from the author’s 1914 play, The Revolutionist, is an engaging and accessible introduction to MacSwiney’s less known cultural legacy.

Admission is free but booking is essential at Eventbrite.ie

A new 96 page, full colour publication will accompany the exhibition Conflicting Visions in a Turbulent Age 1900-1916.  Featuring a new text by Dr Éimear O’Connor HRHA, it is published by Crawford Art Gallery, Cork (ISBN. 978-1-874756-26-2) price €10, and will be available in the gallery shop and online.

Dr Éimear O’Connor HRHA is an art historian, author, and curator. She is a Research Associate with TRIARC‐Irish Art Research Centre, Trinity College Dublin. Her art‐historical research interests are wide ranging. She is particularly interested in the complex national and international contexts pertaining to the construction of Irish visual identity in the late nineteenth and twentieth century. O’Connor’s research also encompasses the development of European and American modernism in the twentieth century. She has published chapters, articles and reviews on Irish art and artists and is author of Seán Keating in Context: Responses to Culture and Politics in Post‐Civil War Ireland (Dublin: Carysfort Press, 2009), editor of Irish Women Artists 1800‐2009: Familiar but Unknown (Dublin: Four Courts Press, 2010). Her monograph on Keating, titled Seán Keating: Art, Politics, and Building the Nation, was published by Irish Academic Press in 2013. O’Connor is currently completing a book that examines the cultural connections between Ireland and America in general, and Dublin and New York in particular between 1890 and 1942. She previously curated Seán Keating: Contemporary Contexts for the Crawford Art Gallery in 2012.