Collecting the New: Recent Acquisitions to the IMMA Collection 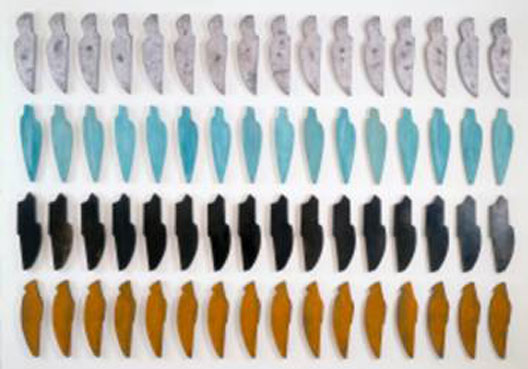 An exhibition presenting artworks recently acquired for IMMA’s Collection, marking the first occasion that these works have been shown at the Museum as part of that Collection, opens to the public at the Irish Museum of Modern Art on Wednesday 19 May 2010. Collecting the New comprises some 42 works which have, for the most part, been acquired since 2005, through purchase, donation and loans. Twenty-six Irish and international artists are represented, including Amanda Coogan, Patrick Hall, Stefan Kürten, Catherine Lee, Janet Mullarney, Makiko Nakamura, Hughie O’Donoghue, and Susan Tiger. The exhibition reflects the Museum’s acquisition policy that the Collection should be firmly rooted in the present, concentrating on acquiring the work of living artists, but also accepting donations and loans of more historical art objects with a particular emphasis on work from the 1940s onwards.

Recent donations on display range from works on paper by Irish artist Patrick Hall to a painting by English artist Alexis Harding. Patrick Hall’s ink, pastel and watercolour works on paper, such as Sprinkle Ochre into my Eyes, 2004, reflect his lifelong interest in human experience, suggesting a quest for meaning and happiness, fuelled by the twin sources of energy behind his work – mysticism and sexuality. Alexis Harding’s uses modernist devices such as grids, lines and arrows to make paintings which seem to be bound in their own materiality, driven by his exploitation of the incompatibility between artists’ oil paint and household gloss paint. This can be seen in the painting Drifters Escape (Blue oil / Dark blue gloss), 2006, in which the artist’s interest in time as a significant factor in the behavior of a painting is also evident.

Purchases to the Museum’s Collection include an installation by Portuguese artist Alexandra do Carmo and a sculptural work by American sculptor Catherine Lee. Alexandra Do Carmo’s practice investigates the dynamics of authorship and the influence of the audience on the artist and social awareness within art making as a means of generating discussions about the artistic practice. In her installation, A Willow (Or Without Godot), 2006, the public is invited to reflect on positive statements made by the characters of Estragon and Vladimir in Beckett’s Waiting for Godot emphasizing a complicity, dependency and deep affection between the two characters. Do Carmo made and exhibited this work while participating on IMMA’s Artist Residency Programme in 2006. Other Voices, 1993, was purchased after a mini-retrospective of Catherine Lee’s work at IMMA in 2005, and is formed from a series of small polychromatic wall-mounted pieces cast from aluminium, copper, bronze and iron. Lee’s works are a hybrid of painting, sculpture and installation, in which she juxtaposes the simplicity of a repeated form with a richness of materials, such as wax, bronze, glass and fibreglass.

The permanent Collection of the Irish Museum of Modern Art comprises approximately 2,500 works by 20th-century and contemporary Irish and international artists. It has been developed through purchase and donations, as well as long term loans and the commissioning of new works. The Museum’s acquisition policy, like its exhibition and education and community programmes, reflects the changing cultural landscape of the late 20th-century and the new millennium. The Museum not only buys the work of living artists but also accepts donations of works from the 1940s onwards – a decade of significant social and cultural change, both in Ireland and worldwide.