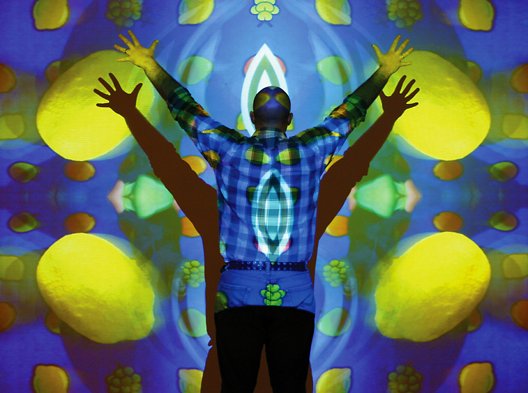 For almost two years now texts and emails have been bouncing back and forth between Paris, Dublin, Kilkenny, Ardfert, San Francisco, Castlebar, London, and Limerick. The subject of all this buzz is an extraordinary collaboration between artists and scientists, leading to a four month exhibition at Farmleigh Gallery for Dublin, European City of Science 2012, which will then tour Ireland for the remainder of 2012.

Sparked by a chance meeting in Paris between Anne Cleary & Denis Connolly (Irish artists based there), and Prof. Patrick Cavanagh, a Harvard Professor of Irish descent specialising in visual perception, Hall of Mirrors has grown to encompass organisations and communities all over Ireland and beyond. Children from Ardfert National School become Dot-People in The Dot Universe—an interactive Artwork inspired by Biological motion and created in collaboration with CLARITY using gaming technology and tracking devices.

The Vision Lab at University Paris Descartes helped the artists create “binocular vision” viewing posts, and a series of “binocular” films were shot with pupils of St. Joseph’s Secondary School in Castlebar.

These are just a few of the spell-binding experiences that Hall of Mirrors holds in store, and each artwork will be accompanied by background information on the scientific principles that informed the art.

Leonardo da Vinci suggested that we should “study the science of art and the art of science.” Taking this good advice student teachers from Mary Immaculate College in Limerick have chosen to make the Hall of Mirrors the focus of their Visual Art Education elective. The students will respond to and engage with the exhibition with the aim of creating a blueprint for educational workshops that will accompany Hall of Mirrors as it tours the country, thus building a long-term legacy for the project through its connection with our young people.