Ciarán Walsh: Beyond Other Voices 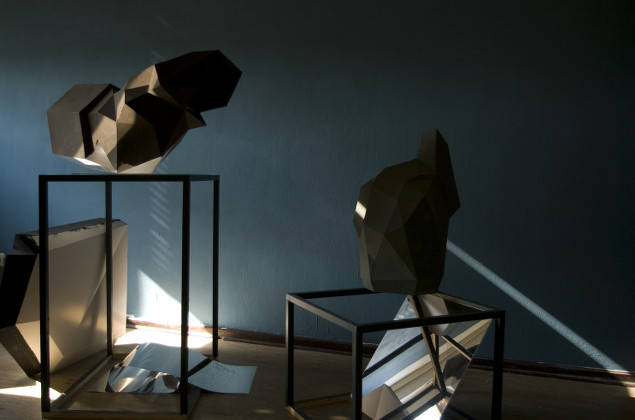 Galway Arts Centre is delighted to present Beyond Other Voices, a solo exhibition by Irish artist Ciarán Walsh. The exhibition continues Walsh’s intertwined explorations into personal and collective memory, the museological uncanny, and the allegorical structures of science-fiction. The works stage provisional theatres within the gallery space, suggesting a number of spectral figurations that are drawn from the varied cultural artefacts with which he engages.

The photographic series He Cried in a Whisper at Some Image, at Some Vision (2013) records the barely visible silhouettes of unknowable ethnographic objects from a set of undefined museum installations, the images themselves constructed from a palette of subtly differentiated greys and blacks. The installation Fragments of Unknown Teachings (2014) builds upon the aesthetic of the photographic series, developing the silhouettes into a spatial dimension. An apparently haphazard assemblage of reductive geometric card constructions, dark wooden frameworks, and glazed and mirrored surfaces provoke a diffused memory of a museum space, but one devoid of any substantive information, a situation exacerbated by the dynamic lighting of the gallery space which illuminates differrent corners of the exhibition space in ever changing patterns.

The selected works from I Grabbed at a Pile of Dust (2014) are part of an ongoing series of model constructions, which are rendered from memories of spaceships, satellites and space colonies depicted in the speculative scientific books and science-fiction films from artist’s youth. The roughly constructed, imperfect and sometimes quite amorphous copies not only call upon scientifically optimistic futures that never came to pass, but more critically reflect upon current distance from an earlier phase of life. As is so common, representation of the futurism of the past becomes a tool to reflect upon the present day. In the video workIt’s Just a Shadow Away (2011), two actors redo scenes from the Andrei Tarkovsky film ‘Solaris’ in the original Russian language of which they are entirely ignorant. Despite this communicational hindrance, the actors work to perform their methodically-learned lines with a passable emotional verisimilitude as they argue over the realisation that one of them is not ontologically ‘real’ in a human sense, but rather the ghostly apparition of the other’s dead wife. A cyclical mise en abyme of layered uncertainties is staged, both in the work itself and ultimately throughout the exhibition.

Ciarán Walsh was born in Carlow in 1980, and received an MA in Art in the Contemporary World from NCAD in 2007. He has shown previously in the solo exhibitions at Pallas Projects (Dublin), VISUAL (Carlow) and Four Gallery (Dublin). Most recently he has partaken in the group exhibitions In the Line of Beauty at the Irish Museum of Modern Art (Dublin) and False Optimism in Crawford City Gallery (Cork), and earlier shown at galleries including the Project Arts Centre and Mother’s Tankstation (Dublin), The Dock (Carrick-on-Shannon) and Joao Cocteau, Stedefreude and Atelierhof Kreuzberg (Berlin). He has curated a number of projects, most recently co-curating The Reading Room in Berlin and a number of other cities, creating spaces for the consideration of the artist’s book.