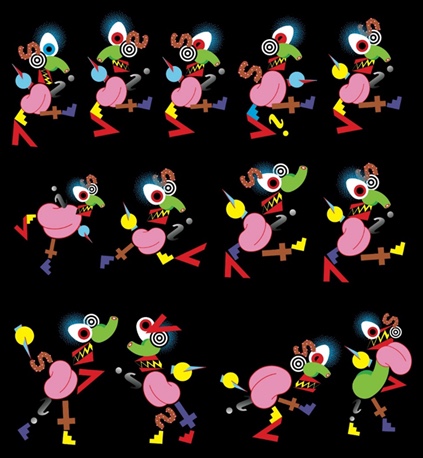 CHROMA is based on the book Chroma – A book of Colour (June 1993) by British artist and filmmaker Derek Jarman. The exhibition will explore themes of the body in relation to colour and space, identity politics, cultural blindness, forced anonymity and the theatrics of visibility and invisibility. Embracing the self-determination and quest for personal freedom that underlines many LGBTQ personal histories and experiences, the project will build new alliances across a diverse set of communities.

Chroma – A book of Colour (June 1993) by Derek Jarman is an intensely personal exploration of colour, written during the final year of the artist’s life as his eyesight fails him. Described as an AIDS autobiography, Chroma is also a work of visceral prose, merging aesthetic and queer thinking with the intensely personal and politically reactive. Published in the same year as the decriminalisation of homosexuality in the Republic of Ireland, Chroma subverts perceived populist norms and is, by default, an inclusive read.

Taking this as its cue CHROMA explores a prism of protest in various guises, through play, art, music, lecture, dance, film and politics. CHROMA will explore themes of body relations to colour and space, identity politics, cultural blindness, forced anonymity, and the theatrics of visibility and invisibility. Embracing the self-determination and quest for personal freedom that underlines many LGBTQ personal histories and experiences the project will build new alliances across the queer community, providing a platform for a co-hosted, multi-vocal, open programme of discussions, screenings, workshops and experimental performances.

The project interweaves chromatic musings, evocative memories and archival reflections on continued desires to integrate and transform society. Featured projects include Club Chroma by artist and designer Niall Sweeney of Pony Ltd., who turns the gallery into a glittering stage for celebrating colourful community. This draws on Pony’s ‘Queer Notions’ and ‘Alternative Miss Ireland’ collective studio archive and longstanding manifesto of subverting conformity through dancing, dressing up and having fun. Featuring interactive agitprops and projected imagery from 25 years of the Alternative Miss Ireland scene, Sweeney calls on visitors to unite in becoming agitators, visionaries and glorious outsiders. Rooted in the domestic social and political contexts from which the self-organised, informal queer club scene of 1990s emerged and its role in mobilising the political drives of Ireland’s social movements, Sweeney creates a space for playful transformation,  experimentation and self-expression — inviting you to make Club Chroma your own.

In the adjacent room, Padraig Robinson’s new artist book Gaze Against Imperialism (Metaflux Publishing 2019) is presented on a custom designed table. The book began in 2014 in the Irish Queer Archive, housed at the National Library Ireland. There Robinson mined selected material from the archive, re-animating the plural and diverging politics of the gay liberation movement in Ireland at the beginning of the 1980s. In doing so, Gaze Against Imperialism expands on LGBTQ narratives through personal accounts and prose that is both journalistic and poetic. Robinson’s new book  exposes the fracturing of political consensus, its current day reflections and the importance of international solidarity for a queer future that has not yet fully arrived.

The Public Programme aligned with CHROMA offers a playful and unexpected environment for reading, discourse, restoring the “I” and the “we” of collective participation, bringing together creative practitioners, educators, activists and designers to respond to ideas of ‘intersectionality’ as it relates to IMMA’s current programme: Desire, A Revision; Derek Jarman, PROTEST! and IMMA Archive 1990s: From the Edge to the Centre