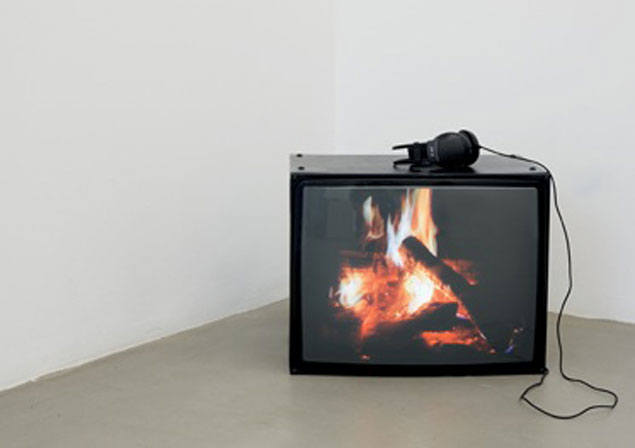 The next exhibition at Void which opens on Saturday 12th June is by New York based artist Christian Jankowski.

Jankowski was born in 1968 in Goettingen, Germany and trained at the Academy of Fine Arts Hamburg. In 1999 he gained international recognition in the 48th Venice Biennale. Jankowski’s work has been featured in solo exhibitions throughout Europe, the US and Asia.

Through a single screen monitor the audience views a fire burning in a hearth, which the artist has built in his Berlin apartment. In watching we are reminded of Jan Dibbets’ TV As A Fireplace, when in 1969 WDR 3 television marked the close of transmission by broadcasting in colour the picture of a burning coal fire. During the eight weeks that it was broadcast there was no mention that the work was in fact an artwork, therefore allowing ‘TV as a Fireplace’ to blend into everyday life almost as if it had always been part of it. Through the work Dibbets demonstrated that TV is a collective experience. Even if lone viewers and families were in separate living rooms, they were united, like prehistoric cave dwellers, by a communal fire. Throughout the work we hear the artist singing and are struck that every song features the word ‘home’ in it. Perhaps some subliminal reference also to the collective experience referenced in Dibbets’ work.

This work was inspired after Jankowski observed his Chinese neighbour Suat Ling, ‘hoola – hooping’ on the rooftop of her New York apartment. Having watched her hoola-hoop for exercise, Jankowski asked her to collaborate on this one-morning only display.

For the piece thirty-one men, women and one child take their positions on the rooftops of Chinatown and follow Suat Ling’s instructions. Throughout the video we hear Ling’s favourite catchy Chinese pop song playing in the background.

The video is reminiscent of many pop videos but also brings to mind popular fitness videos. To accompany the piece in Void, there will be 12 hoola-hoops for the audience to join in and partake in some light exercise.

For this piece, Jankowski placed a small studio in the back of a van outside New York cinemas. When the audiences emerged he asked them to give an account of a lasting impression that the film they just seen had made. Jankowski asks them to deliver this account in the present tense without giving away the title of the film. Overall these impressions give an emotional portrait of the extremely subjective possibilities of engaging with cinema.