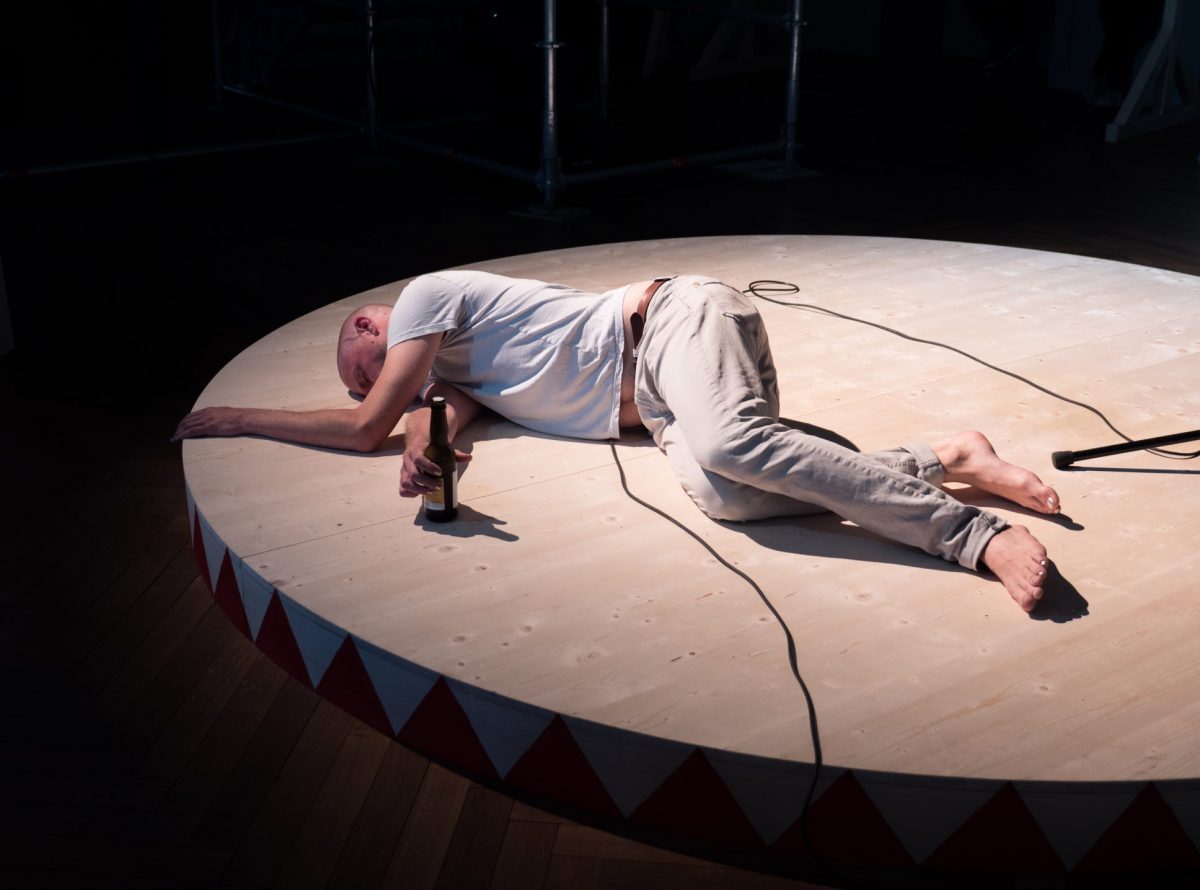 “A spectre is haunting Europe”, Marx wrote in 1848. “Europe is Lost” sings the British spoken word artist Kate Tempest in her 2016 protest song of the same name.

Europe today is rocked by various crises: the rise of populist parties, the creeping effects of climate breakdown, the movement of people displaced by conflict and seeking refuge. Beyond these events, consumer society and the world of entertainment continue to perform. Despite the migrant bodies washed up on Europe’s shores and the bodies of revellers left on the Batclan’s floors, people still go shopping, attend rock concerts, go to the theatre, dance, go clubbing…

Artist Filip Markiewicz’s body of work, Celebration Factory, is a product of a Europe in transformation and marked by deep crises, but also an artistic response to this new socio-political paradigm. The project began in 2017 and has evolved as it has travelled over the past two years. The exhibition’s migration is, in part, an autobiographical mirror for the artist – from the project’s debut at NN Contemporary Art in Northampton, home to a significant Polish diaspora, and the artist’s native Luxembourg and now to the Brexit borderland of Derry. The project will continue to Osnabrück, Germany later in 2019.

The Polish philosopher Zygmunt Bauman talks about a “liquid modernity” where the individual is in the centre. Nothing is fixed; the neoliberal world teaches us a new way of conceiving of our existence. The aim of Celebration Factory is to try to represent this aspect of our society through the form of entertainment. The exhibition is not intending to be a kind of political activism, but rather to develop an almost surreal language consolidating different expressions, music and celebration; to find a liquid and artistic language fitting our moving and evolving society.

Some of the works comprising the exhibition draw from retro-futurism with a nod to Z series cinema. Political power structures are represented by a mise en scène close to the absurd where many genres are mixed. It is a phenomenon that can also be seen in our media-political society in which we distinguish less and less between celebrity and politics, where a kind of vampirisation of contemporary pop culture takes place. This idea is given form through a series of drawings of Dracula including depictions of Bela Lugosi, the first actor to personify the role and inspiration for post-punk 80s goth anthem Bela Lugosi’s Dead by Bauhaus. The band and Oskar Schlemmer’s Bauhaus School logo are other key reference points to the artist along with imagery collected from popular culture, the news, art history and more.

The exhibition sees a factory of drawings with imagery including the detritus from “big nights out” such as Polish Zywiec beer bottles, The Daily Mail’s Brexit front page, Motörhead frontman Lemmy, Albrecht Dürer’s Jesus portrait with Pepsi cans, European hymn composer and Clockwork Orange icon Ludwig van Beethoven with a melting Volkswagen Logo and an Interview by the artist of former polish president Lech Walesa. The soundtracks to these hand-drawn multiples and assemblages are provided by original films exploring various music scenes and Fake Fiction. A circular stage at the heart of the installation invites artists and musicians to activate the exhibition with their performances and voices.

Filip Markiewicz (born in 1980) is a multi-disciplinary Luxembourger artist of Polish origin, who expresses himself through different mediums, including drawing, video and installation. Always seeking explanations for our daily lives, he explores the omnipresence of images and puts into perspective the message they convey. He submits current issues to a critical and political approach, and thus emphasizes the emptiness of our world submerged by visual overproduction where information becomes reality rather than the opposite. In 2015, Markiewicz represented Luxembourg at the 56th Venice Biennale with Paradiso Lussemburgo.

CELEBRATION FACTORY at CCA Derry~Londonderry is supported by Arts Council of Northern Ireland, Derry City and Strabane District Council and The Sandwich.co.

A publication is in preparation with the support of Aeroplastics, Brussels, C+N Canepaneri, Milan, Espace A Vendre, Nice and CCA Derry~Londonderry. Its release is scheduled for Winter 2019.